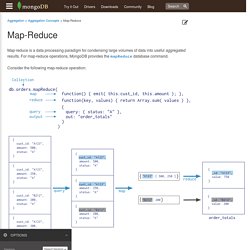 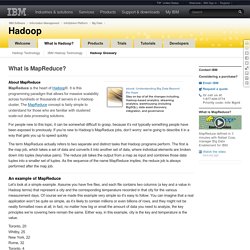 About MapReduce MapReduce is the heart of Hadoop®. It is this programming paradigm that allows for massive scalability across hundreds or thousands of servers in a Hadoop cluster. The MapReduce concept is fairly simple to understand for those who are familiar with clustered scale-out data processing solutions. Stay on top of all the changes including, Hadoop-based analytics, streaming analytics, warehousing (including BigSQL), data asset discovery, integration, and governance For people new to this topic, it can be somewhat difficult to grasp, because it’s not typically something people have been exposed to previously. 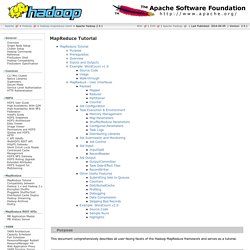 This should help users implement, configure and tune their jobs in a fine-grained manner. However, please note that the javadoc for each class/interface remains the most comprehensive documentation available; this is only meant to be a tutorial. Let us first take the Mapper and Reducer interfaces. Applications typically implement them to provide the map and reduce methods. We will then discuss other core interfaces including Job, Partitioner, InputFormat, OutputFormat, and others. Finally, we will wrap up by discussing some useful features of the framework such as the DistributedCache, IsolationRunner etc. Payload. Non relational databases-no sql. When NoSQL Databases Are — Yes — Good For You And Your Company. The proliferation of non-relational databases in the tech sector these days could lead you to think that these data management tools (also known as NoSQL databases) are eventually going to make traditional relational databases extinct. 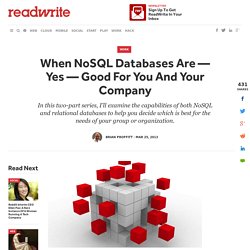 Not so. Each of these database types is best suited for very different types of workloads, and that's going to prevent either one from tromping the other into the dust. Which means that IT and other managers are going to have to figure out which approach is best suited for the task at hand. In this two-part series, I'll examine the capabilities of both NoSQL and relational databases to help you make the right decisions for your organization. 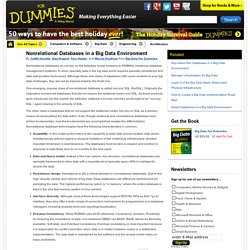 In short, specialty data in the big data world requires specialty persistence and data manipulation techniques. Although these new styles of databases offer some answers to your big data challenges, they are not an express ticket to the finish line. One emerging, popular class of nonrelational database is called not only SQL (NoSQL). 10 things you should know about NoSQL databases. The relational database model has prevailed for decades, but a new type of database -- known as NoSQL -- is gaining attention in the enterprise. 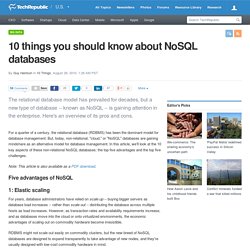 Here's an overview of its pros and cons. For a quarter of a century, the relational database (RDBMS) has been the dominant model for database management. But, today, non-relational, "cloud," or "NoSQL" databases are gaining mindshare as an alternative model for database management. In this article, we'll look at the 10 key aspects of these non-relational NoSQL databases: the top five advantages and the top five challenges. Note: This article is also available as a PDF download. NOSQL Databases. NoSQL. A relatively new concept in the world of database systems is the NoSQL DBMS. 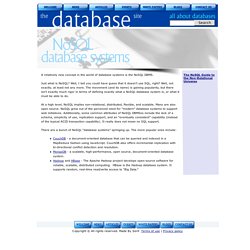 Just what is NoSQL? Well, I bet you could have guess that it doesn’t use SQL, right? Well, not exactly, at least not any more. The movement (and its name) is gaining popularity, but there isn’t exactly much rigor in terms of defining exactly what a NoSQL database system is, or what it must be able to do. At a high level, NoSQL implies non-relational, distributed, flexible, and scalable. There are a bunch of NoSQL “database systems” springing up. CouchDB - a document-oriented database that can be queried and indexed in a MapReduce fashion using JavaScript. Non-relational DBMSes. Hierarchical DBMSes IMS - IBM’s hierarchical mainframe DBMS Model 204 - CCA’s hierarchical DBMS Database management systems have been around for a long time... a lot longer than the relational model and SQL. 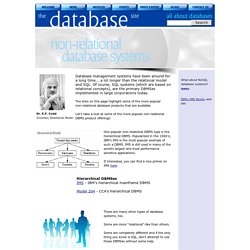 Of course, SQL systems (which are based on relational concepts), are the primary DBMSes implemented in large corporations today. Non-Relational-Database Technologies. For over thirty years, relational database technology has been the gold standard. 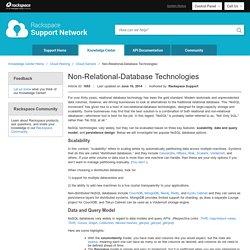 Modern workloads and unprecedented data volumes, however, are driving businesses to look at alternatives to the traditional relational database. This “NoSQL movement” has given rise to a host of non-relational-database technologies, designed for large-capacity storage and scalability. Some businesses may find that the best solution is a combination of both relational and non-relational databases—whichever tool is best for the job. In this regard, “NoSQL” is probably better referred to as, “Not Only SQL,” rather than “No SQL at all.” NoSQL technologies vary widely, but they can be evaluated based on three key features: scalability, data and query model, and persistence design. What is a Non-Relational Database? - Definition from Techopedia. Assignmnet2, part 1 individual. What can we Learn from Facebook's Emotional Contagion Experiment? - Translation Therapy. Can emotional states be manipulated just by the use of emotion-evoking communication? 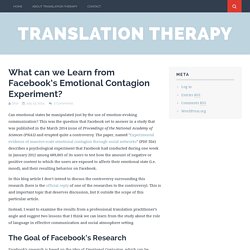 This was the question that Facebook set to answer in a study that was published in the March 2014 issue of Proceedings of the National Academy of Sciences (PNAS) and erupted quite a controversy. The paper, named "Experimental evidence of massive-scale emotional contagion through social networks" (PDF file) describes a psychological experiment that Facebook had conducted during one week in January 2012 among 689,003 of its users to test how the amount of negative or positive content to which the users are exposed to affects their emotional state (i.e. mood), and their resulting behavior on Facebook.

In this blog article I don’t intend to discuss the controversy surrounding this research (here is the official reply of one of the researches to the controversy). This is and important topic that deserves discussion, but it outside the scope of this particular article. Facebook Experiment Demonstrates Transfer of Emotional States via Social Media. The Facebook experiment ran from January 11 to 18, 2012 during which the hundreds of thousands of Facebook users unknowingly participating may have felt either happier or more depressed than usual because they visualized the post of their friend. The study was conducted in conjunction with researchers from the Cornell and the University of California, Facebook filtered users’ news feeds composed by comments, videos, pictures and web links posted by other people in their social network in order to provide evidence of massive-scale emotional contagion through social networks.

Emotional states can be transferred to others via emotional contagion, leading people to experience the same emotions without their awareness. Emotional contagion is well established in laboratory experiments, with people transferring positive and negative emotions to others. Three studies have laid the groundwork for testing these processes via Facebook, the largest online social network. The Facebook Emotion Study in a Broader Context. Which line matches the first line, A, B, or C? In the Asch conformity experiments, people frequently followed the majority judgment, even when the majority was (objectively) wrong. Author note: This post contains both some criticisms of the PNAS paper's claims of 'emotional contagion' and some reasons why we should debate the ethics of the study in the broader context of experimental studies that have come before it. In response to some comments on Twitter, I feel the need to point out that my discussion of the limited effects of the study are not a post-hoc justification of why the study was or was not ethical.

However, IRB approval of social science studies does take into consideration the expected impacts (how big and in what direction) of the experimental manipulation. Another PNAS paper is inciting some controversy, specifically over whether the experimental manipulation involved was ethical. Facebook’s Emotional Manipulation Study: When Ethical Worlds Collide. The research community is buzzing about the ethics of Facebook’s now-famous experiment in which it manipulated the emotional content of users’ news feeds to see how that would affect users’ activity on the site. (The paper, by Adam Kramer of Facebook, Jamie Guillory of UCSF, and Jeffrey Hancock of Cornell, appeared in Proceedings of the National Academy of Sciences.) Facebook unethical experiment: It made news feeds happier or sadder to manipulate people’s emotions. Photo by Karen Bleier/AFP/Getty Images Facebook has been experimenting on us.

A new paper in the Proceedings of the National Academy of Sciences reveals that Facebook intentionally manipulated the news feeds of almost 700,000 users in order to study “emotional contagion through social networks.” Katy Waldman is Slate’s words correspondent. The researchers, who are affiliated with Facebook, Cornell, and the University of California–San Francisco, tested whether reducing the number of positive messages people saw made those people less likely to post positive content themselves. The same went for negative messages: Would scrubbing posts with sad or angry words from someone’s Facebook feed make that person write fewer gloomy updates? They tweaked the algorithm by which Facebook sweeps posts into members’ news feeds, using a program to analyze whether any given textual snippet contained positive or negative words. Who Owns Photos and Videos Posted on Facebook, Instagram or Twitter? 10 ethical issues confronting IT managers. Should employees be told to what extent their behavior is monitored?

How much effort and expense should managers incur in considering questions of data access and privacy? Does the availability of information justify its use? CIO Jeff Relkin examines these and other ethical concerns facing today's IT manager. This article is also available as a PDF downoad. By Jeff Relkin In "10 ethical issues raised by IT capabilities," we examined ethical issues raised by IT capabilities, issues that all of us as technology professionals need to consider as we go about our duties. Trackingsurvey12.pdf.

Welcome to Forbes. Emotional Contagion: A People Pattern Study In 3 Parts. The Facebook Emotions Study Controversy. What can we Learn from Facebook's Emotional Contagion Experiment? - Translation Therapy. Facebook Experiment Demonstrates Transfer of Emotional States via Social Media. Everything We Know About Facebook's Secret Mood Manipulation Experiment. It was probably legal. But was it ethical? Reuters Updated, 09/08/14 Facebook’s News Feed—the main list of status updates, messages, and photos you see when you open Facebook on your computer or phone—is not a perfect mirror of the world. But few users expect that Facebook would change their News Feed in order to manipulate their emotional state. We now know that’s exactly what happened two years ago. The Facebook Emotion Study in a Broader Context. Facebook’s Emotional Manipulation Study: When Ethical Worlds Collide.