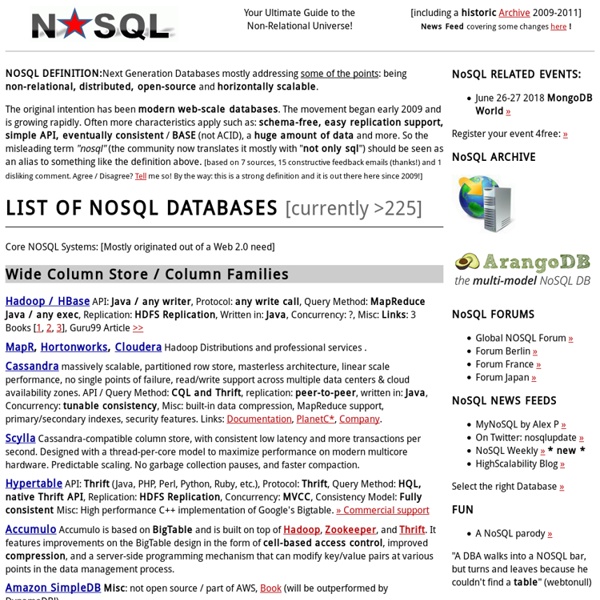 Couchbase: Server Features Flexible Data Model JSON Support Couchbase Server 2.0 has native support for JSON documents. Each JSON document can have a different structure, and multiple documents with different structures can be stored in the same Couchbase bucket. Document structure can be changed at any time, without changing other documents in the database, making it faster to add features to your application. Genetic and Rare Diseases Information Center (GARD) – an NCATS Program Cockayne is a rare disease which causes , premature aging (progeria), severe photosensitivity, and moderate to severe learning delay.[1] This syndrome also includes failure to thrive in the newborn, very small head (), and impaired nervous system development. Other symptoms may include , tooth decay, vision problems, and bone abnormalities.[2] There are three subtypes according to the severity of the disease and the onset of the symptoms:[2][3] Cockayne syndrome type 1 (type A), sometimes called “classic” or "moderate" Cockayne syndrome, diagnosed during early childhood Cockayne syndrome type 2 (type B), sometimes referred to as the “severe” or "early-onset" type, presenting with growth and developmental abnormalities at birth Cockayne syndrome type 3 (type C), a milder form of the disorder Cockayne syndrome is caused by in either the ERCC8 (CSA) or ERCC6 (CSB) . Inheritance is .[2] Type 2 is the most severe and affected people usually do not survive past childhood.

untitled by Luke P. Issac on January 14, 2014 Most of you are already familiar with SQL database, and have a good knowledge on either MySQL, Oracle, or other SQL databases. In the last several years, NoSQL database is getting widely adopted to solve various business problems. It is helpful to understand the difference between SQL and NoSQL database, and some of available NoSQL database that you can play around with. Redis Benchmarks on FusionIO December 10, 2009 by Ryan Lowe7 Comments Peter took a look at Redis some time ago; and now, with the impending 1.2 release and a slew of new features, I thought it time to look again. One of the more interesting features in 1.2 is the ability to operate in “append-only file persistence mode”, meaning Redis has graduated from a semi-persistent to a fully-persistent system!

Cockayne syndrome Cockayne syndrome is a rare disorder characterized by an abnormally small head size (microcephaly), a failure to gain weight and grow at the expected rate (failure to thrive) leading to very short stature, and delayed development. The signs and symptoms of this condition are usually apparent from infancy, and they worsen over time. Most affected individuals have an increased sensitivity to sunlight (photosensitivity), and in some cases even a small amount of sun exposure can cause a sunburn or blistering of the skin. Other signs and symptoms often include hearing loss, vision loss, severe tooth decay, bone abnormalities, hands and feet that are cold all the time, and changes in the brain that can be seen on brain scans. People with Cockayne syndrome have a serious reaction to an antibiotic medication called metronidazole. If affected individuals take this medication, it can cause life-threatening liver failure.

Cassandra vs MongoDB vs CouchDB vs Redis vs Riak vs HBase comparison (Yes it's a long title, since people kept asking me to write about this and that too :) I do when it has a point.) While SQL databases are insanely useful tools, their monopoly in the last decades is coming to an end. And it's just time: I can't even count the things that were forced into relational databases, but never really fitted them. (That being said, relational databases will always be the best for the stuff that has relations.) Edwards' syndrome (trisomy 18) Edwards' syndrome, also known as trisomy 18, is a rare but serious genetic condition that causes a wide range of severe medical problems. Sadly, most babies with Edwards' syndrome will die before or shortly after being born. Some babies with less severe types of Edwards' syndrome, such as mosaic or partial trisomy 18, do survive beyond a year and, very rarely, into early adulthood.

What is NoSQL (Not Only SQL database)? - Definition from WhatIs.com NoSQL is an approach to database design that can accomodate a wide variety of data models, including key-value, document, columnar and graph formats. NoSQL, which stand for "not only SQL," is an alternative to traditional relational databases in which data is placed in tables and data schema is carefully designed before the database is built. NoSQL databases are especially useful for working with large sets of distributed data. NoSQL vs. RDBMS The NoSQL term can be applied to some databases that predated the relational database management system, but it more commonly refers to the databases built in the early 2000s for the purpose of large-scale database clustering in cloud and web applications.