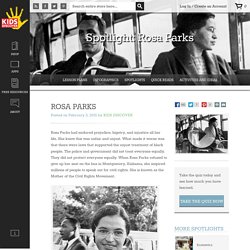 She knew this was unfair and unjust. What made it worse was that there were laws that supported the unjust treatment of black people. The police and government did not treat everyone equally. They did not protect everyone equally. When Rosa Parks refused to give up her seat on the bus in Montgomery, Alabama, she inspired millions of people to speak out for civil rights. Rosa Parks launched the first major protest of the Civil Rights Movement. When Rosa Parks told the bus driver that she would not give her seat to a white passenger in 1955, she lit the spark that became the Civil Rights Movements.

When Rosa’s grandparents were born, there was still slavery in 15 states in the southern U.S. After slavery was ended, it looked like things would get better. Some forms of bigotry were scary and violent. The Ku Klux Klan was a hate group that terrorized black people. Biography for Kids: Ruby Bridges. History >> Biography >> Civil Rights for Kids Occupation: Civil Rights Activist Born: September 8, 1954 in Tylertown, Mississippi Best known for: First African-American student to attend an all-white elementary school in the SouthBiography: Where did Ruby Bridges grow up? 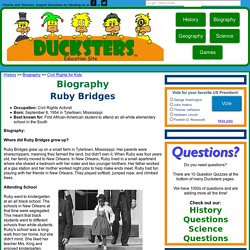 Ruby Bridges grew up on a small farm in Tylertown, Mississippi. Her parents were sharecroppers, meaning they farmed the land, but didn't own it. When Ruby was four years old, her family moved to New Orleans. In New Orleans, Ruby lived in a small apartment where she shared a bedroom with her sister and two younger brothers. US Marshals with Young Ruby Bridges on School Steps by Unknown Attending School Ruby went to kindergarten at an all black school. Chosen for Integration One day, Ruby was asked to take a test. At first her father didn't want her to go to the white school. First Day at a White School. Montgomery Bus Boycott. 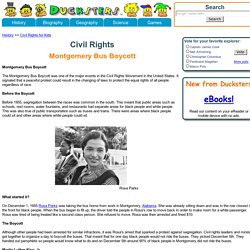 It signaled that a peaceful protest could result in the changing of laws to protect the equal rights of all people regardless of race. Before the Boycott Before 1955, segregation between the races was common in the south. This meant that public areas such as schools, rest rooms, water fountains, and restaurants had separate areas for black people and white people. Rosa Parks What started it? On December 1, 1955 Rosa Parks was taking the bus home from work in Montgomery, Alabama. The Boycott Although other people had been arrested for similar infractions, it was Rosa's arrest that sparked a protest against segregation. Kid's Biography: Martin Luther King, Jr. History >> Biography >> Civil Rights for Kids Martin Luther King at the March on Washingtonby Unknown Occupation: Civil Rights Leader Born: January 15, 1929 in Atlanta, GA Died: April 4, 1968 in Memphis, TN Best known for: Advancing the Civil Rights Movement and his "I Have a Dream" speechBiography: Martin Luther King, Jr. was a civil rights activist in the 1950s and 1960s. 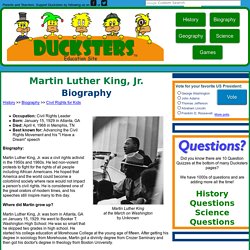 He led non-violent protests to fight for the rights of all people including African Americans. He hoped that America and the world could become a colorblind society where race would not impact a person's civil rights. Where did Martin grow up? Martin Luther King, Jr. was born in Atlanta, GA on January 15, 1929. Martin's dad was a preacher which inspired Martin to pursue the ministry.

How did he get involved in civil rights? In his first major civil rights action, Martin Luther King, Jr. led the Montgomery Bus Boycott. When did King give his famous "I Have a Dream" speech? How did he die? March on Washington. History >> Civil Rights for Kids Background to the March Despite gaining their freedom from slavery after the end of the civil war, African Americans were still facing legal discrimination in the 1950s and early 1960s. 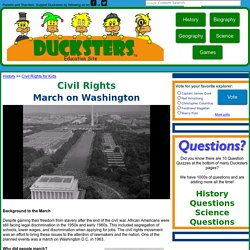 This included segregation of schools, lower wages, and discrimination when applying for jobs. The civil rights movement was an effort to bring these issues to the attention of lawmakers and the nation. One of the planned events was a march on Washington D.C. in 1963. March on Washingtonfrom the Library of Congress Why did people march?

The signs telling people about the march called it the "March on Washington for Jobs and Freedom. " Planning the March The March was planned to take place on August 28, 1963. 1963 was the 100 year anniversary of the Emancipation Proclamation that freed the slaves during the Civil War. Because there would be so many people marching, it took a lot of planning. How many people marched? I Have a Dream Meeting with the President Results.