A brief history of Britain Jeopardy Template. Prehistoric Britain Timeline. The Wars Of The Roses: Everything You Wanted To Know Podcast. Youtube. Causes of the English Civil War - Key Terms - Párosító. Quiz: are you a Roundhead or a Cavalier? English Civil War: Crash Course European History #14. Charles I and the Civil War test questions - KS3 History Revision - BBC Bitesize. Youtube. Charles I Trial and Execution. War of the Roses Lesson Plan, Battles and Timeline. Wars of the Roses Facts, Worksheets, Deaths, Outcome & Context. War of the Roses Quiz - Printable Worksheet (5th-12th Grade) How the Normans changed the history of Europe - Mark Robinson. Henry VIII ("Money, Money, Money" by ABBA) War Of the Roses - The Bosworth Campaign. The Bosworth Campaign Richard III had become king by deposing Edward V in 1483. 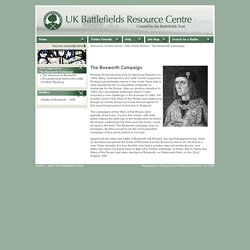 Many resented this and, with Yorkist support for Richard concentrated mainly in the north, there was a new opportunity for a Lancastrian pretender to challenge for the throne. William the Conqueror...and Justin Timberlake?! If you're interested in learning more about William the Conqueror, you can read a comprehensive biography on the official website of the British Monarchy here. 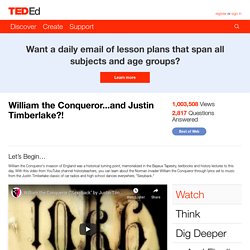 For a more interactive version, see a full timeline from the BBC of his life and achievements here. The History Channel has an article entitled "Ten Things You Didn't Know About William the Conqueror. " To find out more about William's unfortunate predecessor, Harold, read his biography on the British Monarchy website, or the BBC version. There, you can also find a page about Edward the Confessor. For a view of the Bayeux Tapestry online, you can go to the Bayeux Tapestry website, where you can click through panel-by-panel. Francis Drake: Heroic Explorer or Notorious Pirate? #StayHome and Learn About Henry VIII with Suzannah Lipscomb. The Search for Alfred The Great. History - Edward the Confessor.

Britain’s history and culture. Britain has a great heritage. 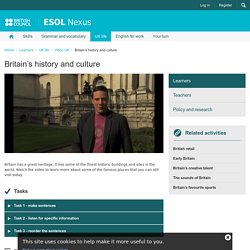 It has some of the finest historic buildings in the world. Palaces, castles and museums bursting with tradition and history… there’s just so much to see and do. Around 30 million people visit Britain every year from overseas. Three of the top five museums and galleries in the world can be found here. There are 14 Roman walled cities, 8 heritage cities and hundreds of castles. In London, Big Ben, Buckingham Palace and Tower Bridge are just some of the places to visit, but how to fit it all in? Now, one way to see the sights is to hop on and hop off an open-top London bus. The Houses of Parliament, one of the largest parliament buildings in the world. This is Regent Street, which was built in the 1800s. Benedict Protheroe is a tour guide. Richard: So in your opinion then, what is it about London that overseas visitors just absolutely love? Benedict: Well, in London, we have over 2,000 years of fascinating history.

I’ve come to Warwick Castle to find out. Adam: Yep. Monty Python What have the romans ever done for us YouTube. 10 Things You May Not Know About William the Conqueror - HISTORY. 1. 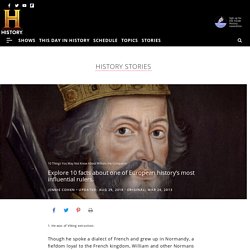 He was of Viking extraction. Though he spoke a dialect of French and grew up in Normandy, a fiefdom loyal to the French kingdom, William and other Normans descended from Scandinavian invaders. William’s great-great-great-grandfather, Rollo, pillaged northern France with fellow Viking raiders in the late ninth and early 10th centuries, eventually accepting his own territory (Normandy, named for the Norsemen who controlled it) in exchange for peace. 2. He had reason to hate his original name. The product of an affair between Robert I, duke of Normandy, and a woman called Herleva, William was likely known to his contemporaries as William the Bastard for much of his life. 3. When William asked for the hand of Matilda of Flanders, a granddaughter of France’s King Robert II, she demurred, perhaps because of his illegitimacy or her entanglement with another man. 4. 5.