The Military and Those Strange Threats to Obama. By Russ Baker on Dec 13, 2011 The Salahis with Obama [pullquote] Small, bad things seem to (almost) happen to Obama; they get little sustained attention from reporters or the public. 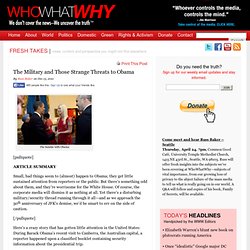 But there’s something odd about them, and they’re worrisome for the White House. Of course, the corporate media will dismiss it as nothing at all. [/pullquote] Here’s a crazy story that has gotten little attention in the United States: During Barack Obama’s recent visit to Canberra, the Australian capital, a reporter happened upon a classified booklet containing security information about the presidential trip. The highly sensitive booklet was…lying in a gutter. What in the world can that be about? We’ll come back to that in a bit, but first, let’s consider how a political leader such as Obama would react to such an incident, which was reported in an Australian newspaper.

In all probability, he would assume it was the result of spectacular carelessness. Apparently, this was not the result of a one-day lapse. Mr. The Libya Secret: How West Cooked Up “People’s Uprising” By Russ Baker on Aug 31, 2011 As I write this, a new day is dawning in Libya. 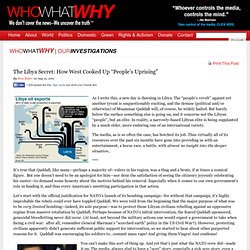 The “people’s revolt” against yet another tyrant is unquestionably exciting, and the demise (political and/or otherwise) of Muammar Qaddafi will, of course, be widely hailed. But barely below the surface something else is going on, and it concerns not the Libyan “people”, but an elite. In reality, a narrowly-based Libyan elite is being supplanted by a much older, more enduring one of an international variety. The media, as is so often the case, has botched its job. It’s true that Qaddafi, like many—perhaps a majority of—rulers in his region, was a thug and a brute, if at times a comical figure. Let’s start with the official justification for NATO’s launch of its bombing campaign—for without that campaign, it’s highly improbable the rebels could ever have toppled Qaddafi.

Obama (we intervened to stop massacre) You can’t make this sort of thing up. “That it didn’t hit anything or kill anyone is not the point. Doubts On “Official Story” of Bin Laden Killing. By Russ Baker on Aug 17, 2011 Article Summary: When you look closely, nothing seems right about what will surely become the accepted account of the raid that nailed America’s enemy number one. 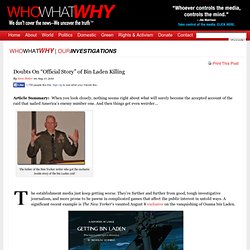 And then things get even weirder… The father of the New Yorker writer who got the exclusive inside story of the bin Laden raid he establishment media just keep getting worse. They’re further and further from good, tough investigative journalism, and more prone to be pawns in complicated games that affect the public interest in untold ways. The piece, trumpeted as the most detailed account to date of the May 1 raid in Abbottabad Pakistan, was an instant hit. To be sure, it is the kind of granular, heroic story that the public loves, that generates follow-up bestsellers and movie options. Here’s the introduction to the mission commander, full of minute details that help give it a ring of authenticity and suggest the most intimate reportorial access: On and on went the “tick-tock.” But we don’t. kjhkljh. CIA Helped Bush Senior In Oil Venture. By Russ Baker on Jan 7, 2007 Newly released internal CIA documents assert that former president George Herbert Walker Bush’s oil company emerged from a 1950′s collaboration with a covert CIA officer. 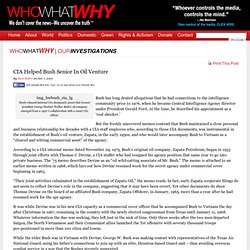 Bush has long denied allegations that he had connections to the intelligence community prior to 1976, when he became Central Intelligence Agency director under President Gerald Ford. At the time, he described his appointment as a ‘real shocker.’ But the freshly uncovered memos contend that Bush maintained a close personal and business relationship for decades with a CIA staff employee who, according to those CIA documents, was instrumental in the establishment of Bush’s oil venture, Zapata, in the early 1950s, and who would later accompany Bush to Vietnam as a “cleared and witting commercial asset” of the agency. According to a CIA internal memo dated November 29, 1975, Bush’s original oil company, Zapata Petroleum, began in 1953 through joint efforts with Thomas J. George H.W. 28Reddit. What Obama Is Up Against.

By Russ Baker on Mar 10, 2010 We Americans harbor a quaint belief that a new president takes charge of a government that eagerly awaits his next command. 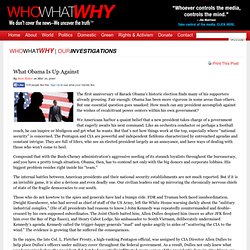 Like an orchestra conductor or perhaps a football coach, he can inspire or bludgeon and get what he wants. But that’s not how things work at the top, especially where “national security” is concerned. The Pentagon and CIA are powerful and independent fiefdoms characterized by entrenched agendas and constant intrigue. They are full of lifers, who see an elected president largely as an annoyance, and have ways of dealing with those who won’t come to heel. Compound that with the Bush-Cheney administration’s aggressive seeding of its staunch loyalists throughout the bureaucracy, and you have a pretty tough situation. The internal battles between American presidents and their national security establishments are not much reported. Those who do not kowtow to the spies and generals have had a bumpy ride.