Youth Self Employment Foundation - Who We Are. Altemius Milinga, Executive Director and Co-Founder Altemius Millinga is an economist and entrepreneur with 20 years experience in microfinance and small enterprise development. 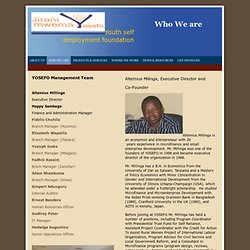 Mr. Millinga was one of the founders of YOSEFO in 1996 and became executive director of the organization in 1998. Mr. Before joining at YOSEFO Mr. He is a founder and Board Member of the Mbinga Community Bank, a regulated regional bank. Solar HOPE for Tanzania - rsadle's Photos. Ayúdanos a ayudar. Loans that change lives.

Kiva Friends - Summary spreadsheet. * "Kiva loan data" - Kiva's API seems to return the 16th of a month instead of the 1st as "Date First Repayment Due". 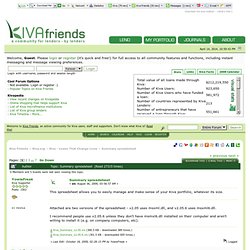 Is there any apparent reason for this or do the engineers simply don't know or care that the Due Date has been shifted forward? Is that happening on all your loans, or only on the ones prior to Kiva changing to a 1st of the month due date? * "Loans" - The "Expected Paid Back" today seems to already include what is expected to be returned on the 15th of this month (or am I imagining things?).

Is there any reason for this? It looks like I haven't correctly handled the fact that there is now a period between the previous due date and the next "expected" repayment date. In the old days we would expect the repayments on the 15th of one month for amounts due on the 15th of the next month, so it was just a case of saying that everything that was due up to the next due date was currently "expected". Looks like v2.01 will have to come out soon. Loans to Tanzania residents. Tanzania > Tujijenge Tanzania Ltd. September 11, 2011 As part of an ongoing effort to fully migrate risk ratings to our new and enhanced risk rating system, Kiva has conducted a re-assessment of the level of risk posed by this institution. 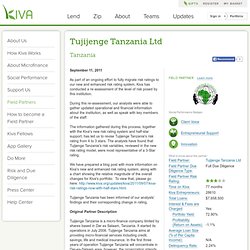 During this re-assessment, our analysts were able to gather updated operational and financial information about the institution, as well as speak with key members of the staff. The information gathered during this process, together with the Kiva's new risk rating system and half-star support, has led us to revise Tujijenge Tanzania's risk rating from 4 to 3 stars. The analysts have found that Tujijenge Tanzania's risk variables, reviewed in the new risk rating model, were most representative of a 3-Star rating.

Kiva Chronicles. Matt began developing Kiva in late 2004 as a side-project while working as a computer programmer at TiVo, Inc. 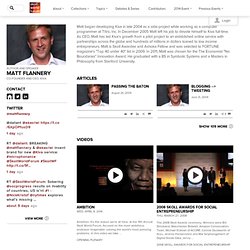 In December 2005 Matt left his job to devote himself to Kiva full-time. As CEO, Matt has led Kiva's growth from a pilot project to an established online service with partnerships across the globe and hundreds of millions in dollars loaned to low income entrepreneurs. Matt is Skoll Awardee and Ashoka Fellow and was selected to FORTUNE magazine's "Top 40 under 40" list in 2009. In 2011, Matt was chosen for the The Economist "No Boundaries" Innovation Award. He graduated with a BS in Symbolic Systems and a Masters in Philosophy from Stanford University. Articles Videos AMBITION Wed, April 9, 2014 Ambition. 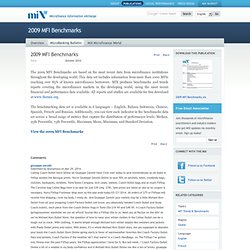 This data set includes information from more than 1000 MFIs reaching over 85% of known microfinance borrowers. MIX produces benchmarks and trends reports covering the microfinance markets in the developing world, using the most recent financial and performance data available. All reports and studies are available for free download at www.themix.org. The benchmarking data set is available in 6 languages – English, Bahasa Indonesia, Chinese, Spanish, French and Russian. Additionally, you can view each indicator in the benchmarks data set across a broad range of metrics that capture the distribution of performance levels: Median, 25th Percentile, 75th Percentile, Maximum, Mean, Minimum, and Standard Deviation. Microfinance Tanzania. 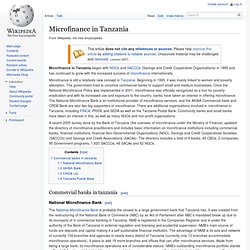 Microfinance is still a relatively new concept in Tanzania. Beginning in 1995, it was mainly linked to women and poverty alleviation. The government tried to convince commercial banks to support small and medium businesses. Once the National Microfinance Policy was implemented in 2001, microfinance was officially recognized as a tool for poverty eradication and with its increased use and exposure to the country, banks have taken an interest in offering microfinance.