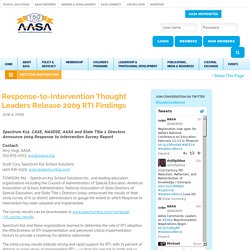 The survey results can be downloaded at www.spectrumk12.com/campaign/rti_survey_results. Spectrum K12 and these organizations teamed to determine the rate of RTI adoption, the effectiveness of RTI implementation and perceived critical implementation factors to provide a roadmap for districts nationwide. RTI Goes Mainstream. In more districts than ever, Response-to-Intervention programs are gaining ground, nipping learning problems in the bud and keeping more students out of special education classes when they truly need intervention, which, of course, is the goal. 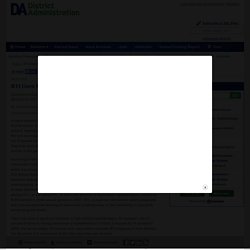 According to the Response to Intervention Adoption Survey 2009, which was conducted by Spectrum K12 School Solutions with the American Association of School Administrators, the Council of Administrators of Special Education, and the National Association of State Directors of Special Education, 71 percent of respondents indicated their districts are piloting RTI , or are using RTI , or are in the process of districtwide implementation, compared to 60 percent in 2008 and 44 percent in 2007. RTI , a multi-tier intervention used to diagnose and address potential learning or behavioral problems early, is also increasing in popularity across all grade levels. Popularity Factors Screening and Monitoring Behavioral Interventions Technology Tools The Benefits. 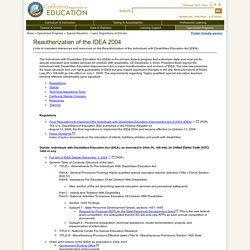 The Individuals with Disabilities Education Act (IDEA) is the primary federal program that authorizes state and local aid for special education and related services for children with disabilities. On December 3, 2004, President Bush signed the Individuals with Disabilities Education Improvement Act, a major reauthorization and revision of IDEA. The new law preserves the basic structure and civil rights guarantees of IDEA but also makes significant changes in the law. Most provisions of Public Law (PL) 108-446 go into effect on July 1, 2005. The requirements regarding “highly qualified” special education teachers became effective immediately upon signature. Selecting an RTI Education Model. IDEA - Maintenance of Effort (MOE) Requirement. Maintenance of Effort (MOE) Technical Assistance This guide provides an overview of the IDEA MOE regulations, covers how DPI tests an LEA's compliance with the MOE regulations, and walks the reader through the web-based Eligibility and Compliance reports. 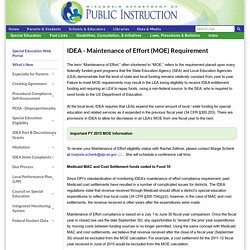 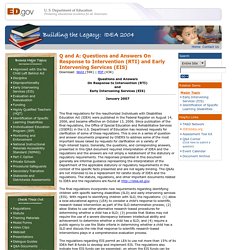 Since publication of the final regulations, the Office of Special Education and Rehabilitative Services (OSERS) in the U.S. Department of Education has received requests for clarification of some of these regulations. The final regulations incorporate new requirements regarding identifying children with specific learning disabilities (SLD) and early intervening services (EIS). The regulations regarding EIS permit an LEA to use not more than 15% of its IDEA Part B funds to develop and implement EIS. The requirements for early intervening services are found in the regulations at 34 CFR §§300.205(d), 300.208(a)(2), 300.226 and 300.646(b)(2). A. B. BehaviorAdvisor.com Dr. Mac's Amazing Classroom Behavior Management Site. Home Page. CEC's RTI Blog. By Dr. 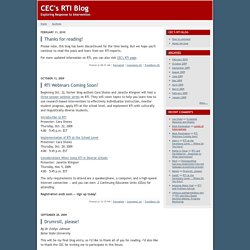