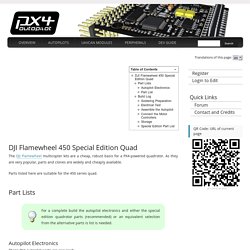 As they are very popular, parts and clones are widely and cheaply available. Parts listed here are suitable for the 450 series quad. Part Lists For a complete build the autopilot electronics and either the special edition quadrotor parts (recommended) or an equivalent selection from the alternative parts is list is needed. Autopilot Electronics. Build an Arduino shield for Quadcopter - Arduino Adapter. I have been searching for ideas of making a Quadcopter Arduino flight controller Adapter to sit my Arduino nano board and the GY80, also have some header pins for motors and receiver to make the cabling tidy. 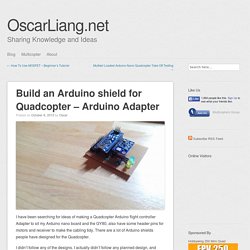 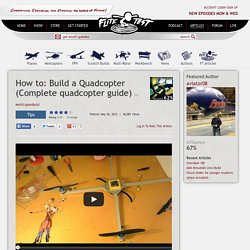 Build Your Own Quadcopter Beginner Guide - Part 1 Robot Kingdom. This is a part of the Tutorials of showing you how to build your own quadcopter from scratch. 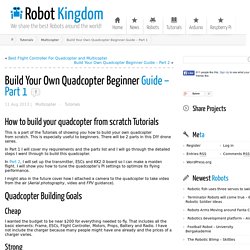 This is especially useful to beginners. There will be 2 parts in this DIY drone series. Best Flight Controller For Quadcopter and Multicopter Robot Kingdom. A Flight controller is the Brain of your quadcopter or Multicopter. 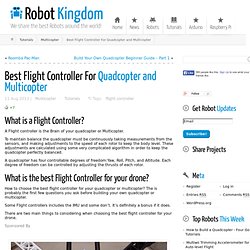 To maintain balance the quadcopter must be continuously taking measurements from the sensors, and making adjustments to the speed of each rotor to keep the body level. These adjustments are calculated using some very complicated algorithm in order to keep the quadcopter perfectly balanced. A quadcopter has four controllable degrees of freedom:Yaw, Roll, Pitch, and Altitude. Each degree of freedom can be controlled by adjusting the thrusts of each rotor. MultiWiiCopter — DJi Distributor Australia Multicopter Tricopter Quadcopter Y6 HexCopter UAV Paris boards. Scarab airframes CarbonBird Wookong NAZA AceOne MultiCopterPilot GoProHero Aerial Photography gimbal. My First Drone – Info On Building, Buying Or Flying DronesMy First Drone. MultiWii additional HOWTO overview. 4: MultiWii release descriptions This post just combines the release descriptions of the last revisions. 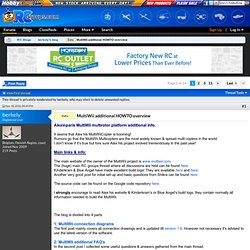 Release version 1.9 1.8 -> 1.9 - some factorizations between PPM sum receiver code & standard receiver code EXPERIMENTAL: integration of direct SBUS receiver thanks to the contribution of Captain IxI & Zaggo For this, you must use: - a MEGA board - the RX1 of the Serial 1 port - have a way to invert the input signal. more info here: EXPERIMENTAL: integration of SPEKTRUM satellite receiver thanks to the contribution of Danal Estes. Arduino Multiwii Quadcopter Connection Test. Today I loaded up the Arduino Multiwii Quadcopter code on the Arduino Uno, and connected everything including a Radio controller, the IMU, ESC and motors, it works straight away! 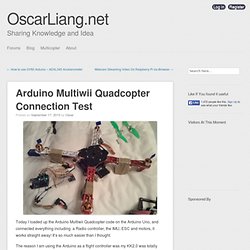 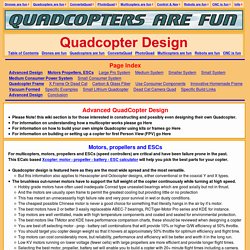 Doing research is pretty boring, so I am trying to put together a comprehensive tutorial about quadcopter, hope it helps you as much as it helped me. Build A Quadcopter From Scratch - Hardware Overview. Aeroquad - An Arduino based four rotor R/C helicopter or quadrocopter. Check out our main website and forum at For feature requests or bug reports, please submit them to: If you are interested in obtaining the latest and greatest code, please visit our main repository at: The AeroQuad is an open-source hardware and software project dedicated to the construction of remote controlled four-rotor helicopters, also known as quadcopters or quadrocopters. 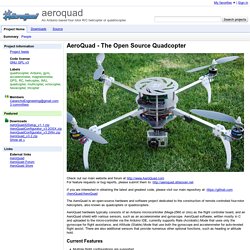 AeroQuad hardware typically consists of an Arduino microcontroller (Mega-2560 or Uno) as the flight controller board, and an AeroQuad shield with various sensors, such as an accelerometer and gyroscope. AeroQuad software, written mostly in C and uploaded to the micro-controller via the Arduino IDE, currently supports Rate (Acrobatic) Mode that uses only the gyroscope for flight assistance, and Attitude (Stable) Mode that use both the gyroscope and accelerometer for auto-leveled flight assist. There are also additional sensors that provide numerous other optional functions, such as heading or altitude hold. Multicopter Tutorial List.

I have been sharing my experience and writing a lot about building multicopters, FPV etc, but still, many people ask me questions that I have already answered in some of my posts. 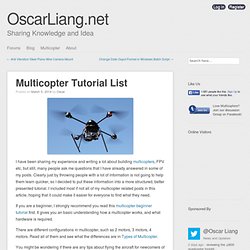 Clearly just by throwing people with a lot of information is not going to help them learn quicker, so I decided to put these information into a more structured, better presented tutorial. I included most if not all of my multicopter related posts in this article, hoping that it could make it easier for everyone to find what they need. If you are a beginner, I strongly recommend you read this multicopter beginner tutorial first. It gives you an basic understanding how a multicopter works, and what hardware is required. There are different configurations in multicopter, such as 2 motors, 3 motors, 4 motors. Quadcopter Dynamics and Simulation - Andrew Gibiansky.

A helicopter is a flying vehicle which uses rapidly spinning rotors to push air downwards, thus creating a thrust force keeping the helicopter aloft. Conventional helicopters have two rotors. Intro to FPV Racing and Mini Quadcopters - Dronethusiast. By Mark Cocquio Hi, my name’s Mark, aka Strepto. I live in Brisbane, Australia, a big country town with delusions of grandeur. Radio Controled Model Reviews. What RC Radio/Transmitter to Buy… We often get asked which radio/transmitter to buy from new folks getting into RC and UAVs.

The answer however is not a simple one and in many respects is like FORD vs GM or PC vs Mac. A lot comes down to personal preferences in regards to brands, look, feel, and price. That said here is some guidance… The radio is a core piece of your equipment, one you will use across multiple aircraft and for years to come. You want to make it a long term investment, not end up having to replace your radio when you run out of channels or features needed for new aircraft. Analog Sonar (AC3.1) Copter supports the MaxSonar line of sonar sensors for “Terrain Following” while in Loiter or Alt Hold modes. In these modes, the copter will attempt to maintain a constant distance from the ground. The sonar is also used during LAND mode. The copter will slow it’s descent to 50cm/s (configurable with LAND_SPEED parameter) when the sonar detects something below the vehicle.

The Maxbotix recommended Sonar for Multicopter use is the MaxBotix XL-EZ4 (aka MB1240) which has a 7.65m max range and a narrow beam which helps reduce the chance of interference from other sources of sound at the same frequency. It is definitely worth reading the MaxSonar Operation on a MultiCopter article by Maxbotix. Choosing Your Parts. Multirotor becoming very popular nowadays. How to build a Multirotor. The photo you see was taken from my first ever copter which i built in 2 hours. MultiRotor Resources - Links to Information and Suppliers. Dide01-quickstart-manual. SA Drones. Beginner Quadcopter Kit Buying Guide - Hovership.