Quipu › What did the Maya, Aztecs, and Incas eat? Many foods that are consumed today, such as tomatoes, potatoes, and corn were first grown in ancient America. What did the Maya, Aztecs, and Incas eat? The Inca Empire › The empire of the Incas was a land of huge contrasts, dominated by the great mountain range of the Andes. The Inca Empire › Inca gold › Incas attached a lot of value to gold. Inca gold › Inca rituals and beliefs › Sacrifice was a religious ritual in the Inca region of South America. Inca rituals and beliefs › Hunting and fishing › History for Kids: Aztecs, Maya, and Inca. Back to History The three most dominant and advanced civilizations that developed in the Americas prior to the arrival of the Europeans were the Aztecs, the Maya, and the Inca. 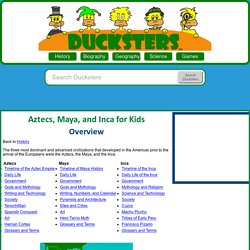 Map of Aztec, Mayan, and Incan Civilizations by Ducksters Aztecs The Aztec Empire was located in central Mexico. It ruled much of the region from the 1400s until the Spanish arrived in 1519. The capital city of the Aztec Empire was Tenochtitlan. The Aztec called their ruler the Tlatoani. Maya The Maya civilization began as early as 2000 BC and continued to have a strong presence in Mesoamerica for over 3000 years until the Spanish arrived in 1519 AD. The Maya were located in Central America in a region that is today made up of southern Mexico, the Yucatan Peninsula, Guatemala, Belize, and northern El Salvador. The Maya were the only American civilization to develop an advanced written language. Inca religion, a religion of many gods. Inca religion was one of the main concerns of the Spanish Conquerors since their arrival to the new world, understanding it was vital to successfully convert the population into Catholicism. 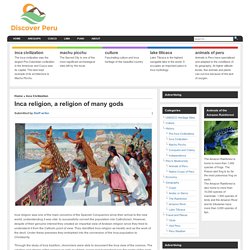 However, despite of their genuine interest they created an impartial view of Andean religion since they tried to understand it from the Catholic point of view. They identified Inca religion as heretic and as the work of the devil. Under these premises they embarked into the conversion of the Inca population to Christianity. Through the study of Inca tradition, chroniclers were able to document the Inca view of the cosmos. The creation and design of the cosmos as well as of time, space and humankind was the works of the gods. The Incas were a very religious people; their religious beliefs were deeply embedded in their lives, everything they did had a religious meaning.