India Timeline. To navigate the timeline, click and drag it with your mouse, or click on the timeline overview on the bottom. 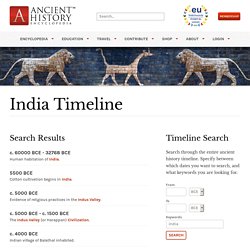 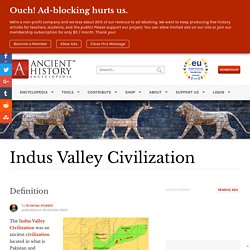 Evidence of religious practices in this area date back approximately to 5500 BCE. Farming settlements began around 4000 BCE and around 3000 BCE there appeared the first signs of urbanization. By 2600 BCE, dozens of towns and cities had been established, and between 2500 and 2000 BCE the Indus Valley Civilization was at its peak. The Life of the Indus Valley Civilization Two cities, in particular, have been excavated at the sites of Mohenjo-Daro on the lower Indus, and at Harappa, further upstream. The evidence suggests they had a highly developed city life; many houses had wells and bathrooms as well as an elaborate underground drainage system. BBC Bitesize - KS2 History - Indus Valley. Indus River Valley civilizations (article) Vedic Age of Ancient India - the foundations of Hindu civilization.

Overview The Vedic Age is the “heroic age” of ancient Indian civilization. 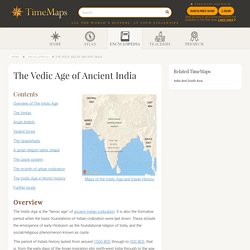 It is also the formative period when the basic foundations of Indian civilization were laid down. Ancient India at the time of the Buddha and rebirth of urban literate civilization. Introduction The Classic Age of Ancient India roughly corresponded, in the chronology of world history, to that of Ancient Greece – 700 BCE to 350 BCE. 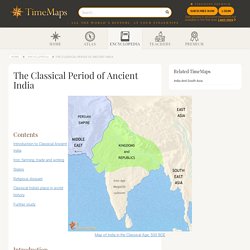 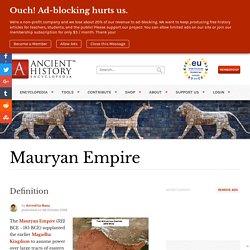 At its height, the empire stretched over parts of modern Iran and almost the entire Indian subcontinent, barring only the southern peninsular tip. The empire came into being when Chandragupta Maurya stepped into the vacuum created by Alexander of Macedon's departure from the western borders of India. Chandragupta subjugated the border states, recruited an army, marched upon the Magadha kingdom, killed its tyrannical king who was despised by the populace, and ascended the throne.

He thus founded the Mauryan dynasty. In his rise to power, he was aided and counselled by his chief minister Kautilya (also known as Chanakya), who wrote the Arthashastra, a compendium of kingship and governance. Consolidation of power Chandragupta embarked upon an aggressive expansion policy. The successor's of Ashoka were not strong enough to hold the empire together. The Maurya and Gupta Empires (article) Gupta Empire. The Gupta Empire stretched across northern, central and parts of southern India between c. 320 and 550 CE. 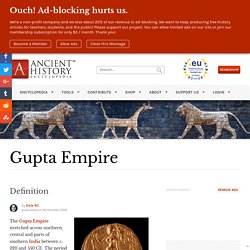 The period is noted for its achievements in the arts, architecture, sciences, religion, and philosophy. Chandragupta I (320 – 335 CE) started a rapid expansion of the Gupta Empire and soon established himself as the first sovereign ruler of the empire. It marked the end of 500 hundred years of domination of the provincial powers and resulting disquiet that began with the fall of the Mauryas. Even more importantly, it began a period of overall prosperity and growth that continued for the next two and half centuries which came to be known as a “Golden Age” in India’s history.

But the seed of the empire was sown at least two generations earlier than this when Srigupta, then only a regional monarch, set off the glory days of this mighty dynasty in circa 240 CE. Gupta Period – Early Days to the Zenith Not much is known about the early days of this Gupta dynasty. Chandragupta I Religion.