Kingdom of Axum. The African kingdom of Axum (also Aksum), located on the northern edge of the highland zone of the Red Sea coast, just above the horn of Africa, was founded in the 1st century CE, flourished from the 3rd to 6th century CE, and then survived as a much smaller political entity into the 8th century CE. 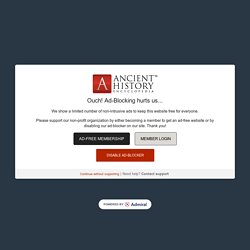 The territory Axum once controlled is today occupied by the states of Ethiopia, Eritrea, Djibouti, Somalia, and Somaliland. Prospering thanks to agriculture, cattle herding, and control over trade routes which saw gold and ivory exchanged for foreign luxury goods, the kingdom and its capital of Axum built lasting stone monuments and achieved a number of firsts. It was the first sub-Saharan African state to mint its own coinage and, around 350 CE, the first to officially adopt Christianity. Axum even created its own script, Ge’ez, which is still in use in Ethiopia today. Name & Foundation The Axum rulers now called themselves by the rather grand title Negusa Negast or ‘King of Kings.’ Trade Art. Ancient Africa for Kids: Kingdom of Aksum (Axum) History >> Ancient Africa The Kingdom of Aksum was an ancient kingdom of Africa. 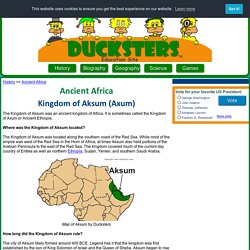 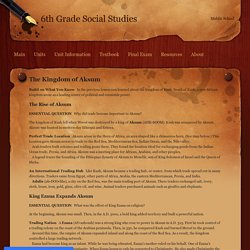 South of Kush, a new African kingdom arose as a leading center of political and economic power. The Rise of Aksum ESSENTIAL QUESTION Why did trade become important to Aksum? The kingdom of Kush fell when Meroë was destroyed by a king of Aksum (AHK•SOOM). Perfect Trade Location Aksum arose in the Horn of Africa, an area shaped like a rhinoceros horn. An International Trading Hub Like Kush, Aksum became a trading hub, or center, from which trade spread out in many directions. King Ezana Expands Aksum ESSENTIAL QUESTION What was the effect of King Ezana on religion? At the beginning, Aksum was small. Trading Nation A Ezana (AY•zah•nah) was a strong king who rose to power in Aksum in A.D. 325. Background: African rulers in Egypt, Kush, and Aksum had accounts of their military campaigns carved onto stone pillars and thrones.

Aksum's Achievements A unique culture rose in Aksum. The kingdom of Aksum (article)