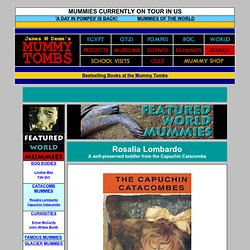 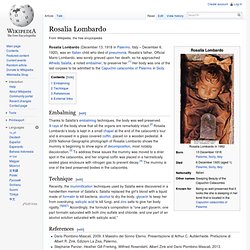 Rosalia's father, Official Mario Lombardo, was sorely grieved upon her death, so he approached Alfredo Salafia, a noted embalmer, to preserve her.[1] Her body was one of the last corpses to be admitted to the Capuchin catacombs of Palermo in Sicily. Embalming[edit] Thanks to Salafia's embalming techniques, the body was well preserved. X-rays of the body show that all the organs are remarkably intact.[2] Rosalia Lombardo's body is kept in a small chapel at the end of the catacomb's tour and is encased in a glass covered coffin, placed on a wooden pedestal. Technique[edit]