Thoughts on Obesity and Why We Get Fat -- Paul Jaminet, Stephan Guyanet and Emily Deans

Why We Get Fat: Food Toxins. Obesity: Often An Infectious Disease. My Theory of Obesity, I: “The Fat Trap” Gary Taubes and Stephan Guyenet: Three Views on Obesity. Thoughts on Obesity Inspired by Stephan. How Does a Cell Avoid Obesity? Why Did We Evolve a Taste for Sweetness? References for my debate with Gary Taubes on The Joe Rogan Experience. Stephan J. Guyenet, PhD – The science of body weight and health. Why the carbohydrate-insulin model of obesity is probably wrong: A supplementary reply to Ebbeling and Ludwig’s JAMA article. Whole Health Source: A Roadmap to Obesity.

In this post, I'll explain my current understanding of the factors that promote obesity in humans. 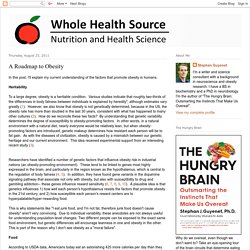 Heritability To a large degree, obesity is a heritable condition. Various studies indicate that roughly two-thirds of the differences in body fatness between individuals is explained by heredity*, although estimates vary greatly (1). However, we also know that obesity is not genetically determined, because in the US, the obesity rate has more than doubled in the last 30 years, consistent with what has happened to many other cultures (2). How do we reconcile these two facts? Whole Health Source: The Carbohydrate Hypothesis of Obesity: a Critical Examination. I'd like to begin by emphasizing that carbohydrate restriction has helped many people lose body fat and improve their metabolic health. 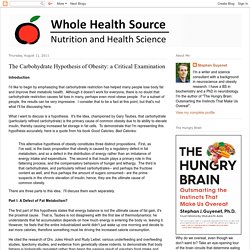 Although it doesn't work for everyone, there is no doubt that carbohydrate restriction causes fat loss in many, perhaps even most obese people. For a subset of people, the results can be very impressive. Seduced by Food: Obesity and the Human Brain. Whole Health Source: Your Brain on Potato Chips. Or, more accurately, a rat's brain on potato chips. 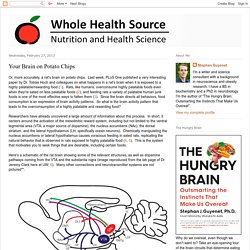 Last week, PLoS One published a very interesting paper by Dr. Tobias Hoch and colleagues on what happens in a rat's brain when it is exposed to a highly palatable/rewarding food (1). Rats, like humans, overconsume highly palatable foods even when they're sated on less palatable foods (2), and feeding rats a variety of palatable human junk foods is one of the most effective ways to fatten them (3). Since the brain directs all behaviors, food consumption is an expression of brain activity patterns. So what is the brain activity pattern that leads to the overconsumption of a highly palatable and rewarding food? Researchers have already uncovered a large amount of information about this process.

Here's a schematic of the rat brain showing some of the relevant structures, as well as dopamine pathways coming from the VTA and the substantia nigra (image reproduced from the lab page of Dr. The changes in brain activity were striking. Whole Health Source: Food Reward: a Dominant Factor in Obesity, Part I. A Curious Finding It all started with one little sentence buried in a paper about obese rats. 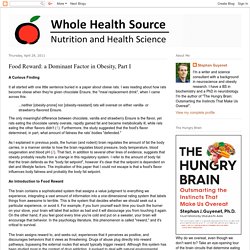 I was reading about how rats become obese when they're given chocolate Ensure, the "meal replacement drink", when I came across this: ...neither [obesity-prone] nor [obesity-resistant] rats will overeat on either vanilla- or strawberry-flavored Ensure. The only meaningful difference between chocolate, vanilla and strawberry Ensure is the flavor, yet rats eating the chocolate variety overate, rapidly gained fat and became metabolically ill, while rats eating the other flavors didn't (1). Furthermore, the study suggested that the food's flavor determined, in part, what amount of fatness the rats' bodies "defended. " As I explained in previous posts, the human (and rodent) brain regulates the amount of fat the body carries, in a manner similar to how the brain regulates blood pressure, body temperature, blood oxygenation and blood pH (2).

Whole Health Source: Food Reward: a Dominant Factor in Obesity, Part II. How to Make a Rat Obese Rodents are an important model organism for the study of human obesity. 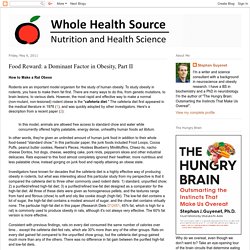 To study obesity in rodents, you have to make them fat first. There are many ways to do this, from genetic mutations, to brain lesions, to various diets. However, the most rapid and effective way to make a normal (non-mutant, non-lesioned) rodent obese is the "cafeteria diet. " The cafeteria diet first appeared in the medical literature in 1976 (1), and was quickly adopted by other investigators. Whole Health Source: Food Reward: a Dominant Factor in Obesity, Part III. Low-Fat Diets In 2000, the International Journal of Obesity published a nice review article of low-fat diet trials. 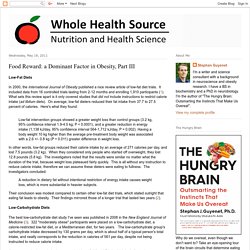 It included data from 16 controlled trials lasting from 2-12 months and enrolling 1,910 participants (1). What sets this review apart is it only covered studies that did not include instructions to restrict calorie intake (ad libitum diets). On average, low-fat dieters reduced their fat intake from 37.7 to 27.5 percent of calories. Whole Health Source: Food Reward: a Dominant Factor in Obesity, Part IV. What is Food Reward? 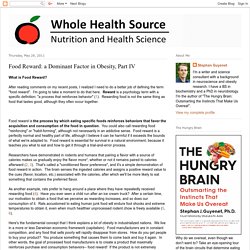 After reading comments on my recent posts, I realized I need to do a better job of defining the term "food reward". Whole Health Source: Food Reward: a Dominant Factor in Obesity, Part V. Non-industrial diets from a food reward perspective In 21st century affluent nations, we have unprecedented control over what food crosses our lips. 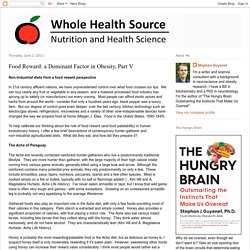 We can buy nearly any fruit or vegetable in any season, and a massive processed food industry has sprung up to satisfy (or manufacture) our every craving. Most people can afford exotic spices and herbs from around the world-- consider that only a hundred years ago, black pepper was a luxury item. But our degree of control goes even deeper: over the last century, kitchen technology such as electric/gas stoves, refrigerators, microwaves and a variety of other now-indispensable devices have changed the way we prepare food at home (Megan J. Elias. To help calibrate our thinking about the role of food reward (and food palatability) in human evolutionary history, I offer a few brief descriptions of contemporary hunter-gatherer and non-industrial agriculturalist diets. The ! Hunted foods are an important part of the ! The ! New Guinea highlanders. Whole Health Source: Food Reward: a Dominant Factor in Obesity, Part VI.

Reward Centers can Modify the Body Fat Setpoint Dopamine is a neurotransmitter (chemical that signals between neurons) that is a central mediator of reward and motivation in the brain. 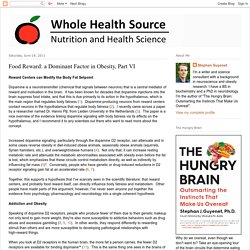 It has been known for decades that dopamine injections into the brain suppress food intake, and that this is due primarily to its action in the hypothalamus, which is the main region that regulates body fatness (1). Dopamine-producing neurons from reward centers contact neurons in the hypothalamus that regulate body fatness (2). Whole Health Source: Food Reward: a Dominant Factor in Obesity, Part VII. Now that I've explained the importance of food reward to obesity, and you're tired of reading about it, it's time to share my ideas on how to prevent and perhaps reverse fat gain. 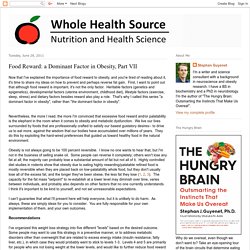 First, I want to point out that although food reward is important, it's not the only factor. Heritable factors (genetics and epigenetics), developmental factors (uterine environment, childhood diet), lifestyle factors (exercise, sleep, stress) and dietary factors besides reward also play a role. That's why I called this series "a dominant factor in obesity", rather than "the dominant factor in obesity". Nevertheless, the more I read, the more I'm convinced that excessive food reward and/or palatability is the elephant in the room when it comes to obesity and metabolic dysfunction. Whole Health Source: Food Reward: a Dominant Factor in Obesity, Part VIII.

Further reading I didn't come up with the idea that excessive food reward increases calorie intake and can lead to obesity, far from it. The idea has been floating around the scientific literature for decades. In 1976, after conducting an interesting diet study in humans, Dr. Michel Cabanac stated that the "palatability of the diet influences the set point of the ponderostat [system that regulates body fatness]" (1). Currently there is a growing consensus that food reward/palatability is a major contributor to obesity. Palatability of food and the ponderostat. If you can read all these papers and still not believe in the food reward hypothesis... you deserve some kind of award.

Evolutionary Psychiatry: Diet-Induced Obesity and Brain Changes. At the beginning of this year, an interesting French study was published, Changes in Brain Activity After a Diet-Induced Obesity. Don't get too excited - they used pigs, not humans, specifically "mini-pigs," which sound awesome. In short, they put two sets of pigs on either standard pig crap lab diet with controlled calories to keep them lean, or a crap lab diet with extra carb and extra fat ad libitum for 5 months. They did SPECT scans of the pigs' brains before and after, and also (in a separate paper) were able to determined that the now-obese pigs had insulin resistance. Evolutionary Psychiatry: Neurobiology of Obesity (Again) Between a quick 4th of July trip to Texas, kiddo piano lessons, and potty training, we are super busy here at Evolutionary Psychiatry.

And AHS12 is coming up at lighting speed! I'm speaking (don't have the actual schedule yet, so no clue when!) And the paleo doctor crowd is coming for a visit, as well as the Antipodeans, and the be-yootiful Lindsay. Maybe Evolvify will show up on his satphone, like those hapless reporters from the war zone on nightly news casts. Evolutionary Psychiatry: Omega 6, Obesity, and Endocannabinoids (Again) One great mystery in this nutritional debate is how the Harvard School of Public Health and their epidemiologists keep finding such links between the omega 6 polyunsaturates and all manner of good health.

My confusion comes in part because in all likelyhood the most omega 6 fats will be eaten by people eating a load of processed crap who by all accounts should not be the healithiest. If the epidemiologists take all those people out of the equation what are we even measuring? Just the leftover folks who eat salad and chicken and fish and walk their dogs every day. Hardly seems fair.