How to Take Care of Your Eyes & the Top 12 Foods for Eye Health. Re-thinking Antioxidant Supplementation for Macular Degeneration. Your Guide to Eye Health. If you’ve ever been diagnosed with an eye condition such as macular degeneration, glaucoma, or myopia, an ophthalmologist may have told you that all you can do is “monitor its progress.” 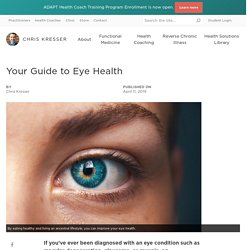 While the medical community has long considered certain eye conditions irreversible and untreatable, or only treatable through surgical intervention, emerging scientific research suggests otherwise. Uveitis + 7 Natural Ways to Improve Symptoms. Uveitis is a group of eye conditions that cause inflammation in the eye (usually in the uvea, which is in between the outer and inner layers of the eye). (1) It can happen on its own or as part of another disease affecting the body. 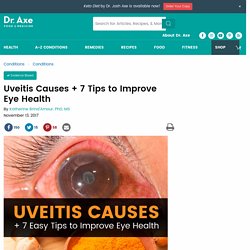 About 38,000 cases happen each year in the U.S. (2) Myopia: Foods & Vitamins for Eye Health. Do you have blurry vision when looking at far away distances, but see more clearly when looking at things up close? 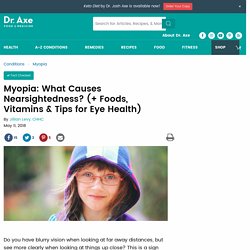 This is a sign that you might have myopia, or “nearsightedness.” The number of people dealing with myopia has increased considerably in recent years. According to studies conducted by the National Eye Institute (NEI), in the early 1970s roughly 25 percent of the U.S. population between the ages 12 and 54 had myopia. Today this number has increased to at least a whopping 30–42 percent, as of the early 2000s. (1) Black Currant: The Antioxidant, Immunity-Boosting Berry. Nutrient-rich, versatile and jam-packed with health benefits, the black currant may not be well-known around the world, but it should be. 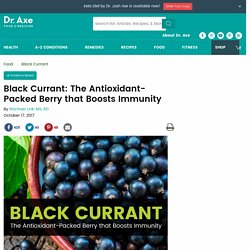 With emerging evidence showing that the black currant possesses antioxidant, antibacterial and antiviral properties and may be useful in slowing cancer growth, enhancing immunity and even preventing eye disease, this sour berry should be a must-try on everyone’s list. Not only can you enjoy this flavorful berry all on its own, but it can also make a delicious addition to everything from baked goods to glazes and more. For even more added convenience, you can also pop a quick capsule of black currant oil to get an instant megadose of its many health benefits. Whether you’re just hearing of black currants for the first time or they’ve been a longtime favorite in your household, these tart berries are high in health benefits and can be a nutritious addition to any diet.

Eye Vitamins & Foods: Are You Getting Enough? Diminishing eyesight might seem like an unavoidable annoyance as you get older, but with the right diet you can hold on to accurate vision for longer than you might think. 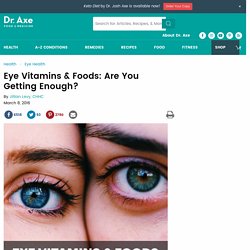 For example, carrots and leafy green veggies are considered some of the best foods for your eyes because they provide antioxidants and eye vitamins, including vitamins C, E, A and zinc, along with carotenoids like lutein and zeaxanthin. These protect the eye’s macula, lens and cornea while also lowering free radical damage and inflammation, which destroy tissue in the eyes.

As we get older, the eyes become more susceptible to damage caused by an unhealthy lifestyle and overactive immune system, which results in the body becoming flooded with defense cells and hormones that damage parts of the eyes. More Eye-Opening Science. What are the things that damage eyesight, and what can you do about it? 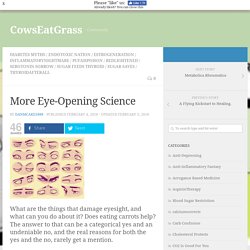 Does eating carrots help? The answer to that can be a categorical yes and an undeniable no, and the real reasons for both the yes and the no, rarely get a mention. Sugar can help, but it probably won’t get the credit it deserves anytime soon. The polyunsaturated fatty acids (PUFAs) are a big problem, but they’re likely to continue to get a free pass. Cataract Symptoms and Natural Cataract Treatments. Cataracts currently affect over 22 million Americans who are 40 or older, and as the population ages, more than 30 million Americans are expected to exhibit cataract symptoms by the year 2020. (1) By current standards, pretty much everyone who lives into the golden years of their 80s or 90s will have to deal with cataract symptoms, a highly common health issue affecting the eyes. 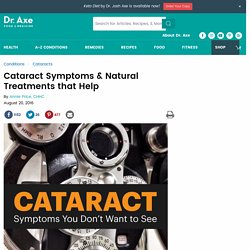 What’s it like to have cataracts? Imagine looking at everything through a fogged-up window and you’ll have somewhat of any idea what a cataract sufferer deals with. Cataract Symptoms and Natural Cataract Treatments. Cataracts currently affect over 22 million Americans who are 40 or older, and as the population ages, more than 30 million Americans are expected to exhibit cataract symptoms by the year 2020. (1) By current standards, pretty much everyone who lives into the golden years of their 80s or 90s will have to deal with cataract symptoms, a highly common health issue affecting the eyes. 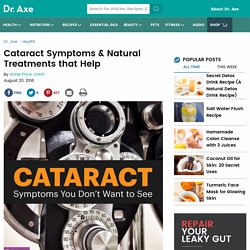 What’s it like to have cataracts? Imagine looking at everything through a fogged-up window and you’ll have somewhat of any idea what a cataract sufferer deals with. While cataracts are certainly more common in the older members of the population, it’s possible to have cataracts when you’re younger. Nutrition and Cataracts. Cataracts are a leading cause of visual impairment among aging Americans and a key quality-of-life issue. 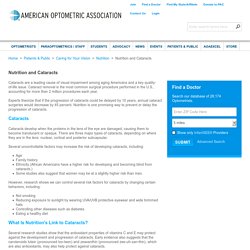 Cataract removal is the most common surgical procedure performed in the U.S., accounting for more than 2 million procedures each year. Experts theorize that if the progression of cataracts could be delayed by 10 years, annual cataract surgeries would decrease by 45 percent. Can Good Nutrition Prevent Cataracts? Cataracts. How To Keep Cataracts From Progressing? 5 Tips From Dr. Boyd. Nutritional modulation of cataract. Glaucoma: Symptoms, Types, Causes and Treatment. Glaucoma is one of the leading causes of visual impairment and severe irreversible blindness in the world, along with macular degeneration. 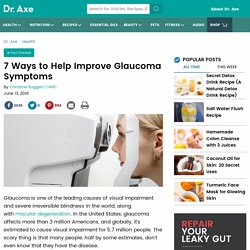 In the United States, glaucoma affects more than 3 million Americans, and globally, it’s estimated to cause visual impairment for 5.7 million people. The scary thing is that many people, half by some estimates, don’t even know that they have the disease. Medical treatment is essential to prevent further damage from glaucoma, but there are also certain foods and supplements that can help to improve symptoms and fight eye damage. In fact, the use of complementary and alternative medicine in glaucoma has received interest from ophthalmologists and patients.

One thing is for sure — it’s a very serious condition that can lead to permanent vision loss if left untreated. What is Glaucoma? Glaucoma is the second leading cause of blindness in the world, accounting for 9–12 percent of all blindness cases in the United States. Types of Glaucoma Symptoms 1. Glaucoma Natural Treatment and Prevention - DrAxe.com.

Glaucoma is the second leading cause of blindness in the US only behind macular degeneration. It is caused by a build-up of fluid in the eye that puts pressure on the optic nerve, retina, and lens. The pressure can permanently damage the eye if not treated. The cause is the accumulation of waste related to aging, high blood pressure, prescription drugs, and other eye-related illnesses. Medical treatment is essential to prevent further damage. To start to improve and prevent glaucoma try these glaucoma natural treatments. Top Foods for Glaucoma Diet Here is the glaucoma natural treatment diet: Foods high in carotenoids – Orange and yellow vegetables are critical to provide sufficient vitamin A to keep eyes healthy. Foods to Avoid Glaucoma Natural Treatment. Mediterranean Diet Linked to Lower Risk of Macular Degeneration.

Lutein and Zeaxanthin Offset Gene Weaknesses that Cause Macular Degeneration. Top 5 Nutrients to Protect Against Macular Degeneration. DHA and EPA Help People with Dry Eye Syndrome. How to Treat Dry Eye Disease Naturally with Diet. One of the most common eye disorders, dry eye disease, causes irritation or discomfort, and can decrease functional vision, sometimes causing a dramatic deterioration in the quality of life.

About five million Americans over age 50 suffer from moderate-to-severe dry eyes, and tens of millions more have mild or episodic manifestations of the disease, at a cost of more than $50 billion.