Specific Nutrients and Aging. NAD and Surtuins. Telomeres. Lifespan. How to Slow Aging and Increase Healthspan, with Dr. David Sinclair. In this episode, we discuss: 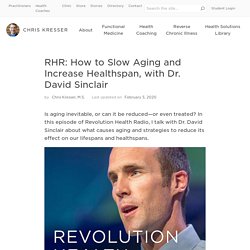 The Garbage Catastrophe of Aging and How to Avoid It. 5 Biggest Longevity Myths. Older people (and those headed in that direction, which is everyone else) are really sold a bill of goods when it comes to health and longevity advice. 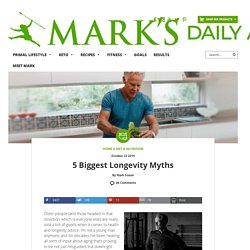 I’m not a young man anymore, and for decades I’ve been hearing all sorts of input about aging that’s proving to be not just misguided, but downright incorrect. Blatant myths about healthy longevity continue to circulate and misinform millions. Older adults at this very moment are enacting routines detrimental to living long that they think are achieving the opposite. A major impetus for creating the Primal Blueprint was to counter these longevity myths. That mission has never felt more personal. Obesity and Aging Are Linked. A just published paper makes the case that carbohydrate restriction with high-intensity interval training is the optimal combination to treat metabolic disease. 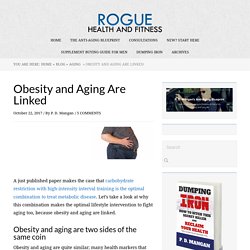 Let’s take a look at why this combination makes the optimal lifestyle intervention to fight aging too, because obesity and aging are linked. Obesity and aging are two sides of the same coin Obesity and aging are quite similar; many health markers that change with aging are related to the same metabolic markers that change in obesity. In healthy young people, markers of biological age increase from age 26 to age 38. Do Calorie Restriction, Fasting, and the Ketogenic Diet Have the Same Anti-Aging Effect? Calorie restriction (CR) is the most robust and effective life-extension intervention known, and intermittent fasting shows great promise in life extension as well. 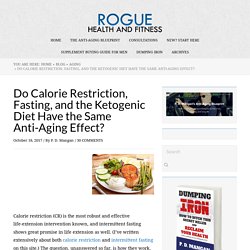 (I’ve written extensively about both calorie restriction and intermittent fasting on this site.) The question, unanswered so far, is how they work, although many possible explanations have been offered. Many pieces of evidence point towards the production of ketones as being the underlying, unifying factor, in which case calorie restriction, fasting, and the ketogenic diet have the same anti-aging effect. Lipofuscin, the toxic waste of aging. As we and other organisms age, the means of dealing with intracellular junk decline. 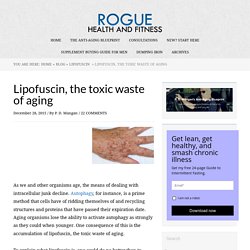 Autophagy, for instance, is a prime method that cells have of ridding themselves of and recycling structures and proteins that have passed their expiration date. Aging organisms lose the ability to activate autophagy as strongly as they could when younger. One consequence of this is the accumulation of lipofuscin, the toxic waste of aging. To explain what lipofuscin is, one could do no better than to quote from an article in Science: Lipofuscin is membrane-bound cellular waste that can be neither degraded nor ejected from the cell but can only be diluted through cell division and subsequent growth.

It seems clear enough that preventing the accumulation of lipofuscin ought to be a target for anti-aging strategies. First, let’s take a closer look at how lipofuscin accumulates. Dietary Protein and Aging: mTOR, IGF-1, and Tradeoffs (Part 1) Year in Review (Part 2 of 3): Hot Topics in Nutrition in 2018. 2018 - Year In Review with a Focus on Aging (Part 1 of 3) Aging and the Microbiome.

Aging and High Levels of Carbohydrate

Do the Elderly Need Paleo More than the Young? 9 Signs of Protein Deficiency + Best Sources of Protein. [Below is my transcript of my video on why protein is important and how to overcome a protein deficiency, along with supplemental information on the topic.] 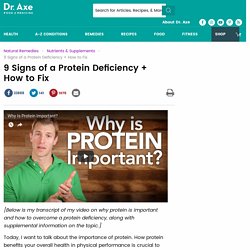 Today, I want to talk about the importance of protein. How protein benefits your overall health in physical performance is crucial to understand. How to Add 12 Years (or More) to Your Life. Every few years, it seems like we get conflicting health and diet information, or well-meaning advice turns out to be wrong. 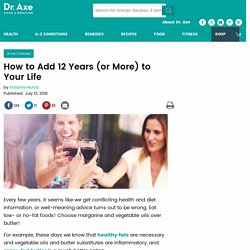 Eat low- or no-fat foods! Choose margarine and vegetable oils over butter! For example, these days we know that healthy fats are necessary and vegetable oils and butter substitutes are inflammatory, and grass-fed butter is a much better option. It’s no wonder the public is constantly confused about advice to follow. Just when you’ve got it down, something changes. Luckily, a new study that looked at 30 years of data has laid the facts bare. Lifestyle Modifications to Extend Life by Limiting Growth. On August 2, 2016 at 1:12 am In the previous article in this series, we discussed how the hormones GH and IGF-1 – or the GH / IGF-1 axis – promote growth and help a young body mature. 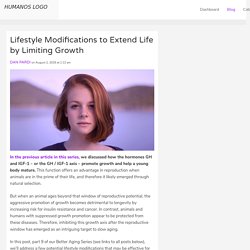 This function offers an advantage in reproduction when animals are in the prime of their life, and therefore it likely emerged through natural selection. But when an animal ages beyond that window of reproductive potential, the aggressive promotion of growth becomes detrimental to longevity by increasing risk for insulin resistance and cancer.

In contrast, animals and humans with suppressed growth promotion appear to be protected from these diseases. Therefore, inhibiting this growth axis after the reproductive window has emerged as an intriguing target to slow aging. Japan's longest lived women hold the key to better health - Blue Zones. Excerpted from The Blue Zones Solution by Dan Buettner, published April 7th, 2015. 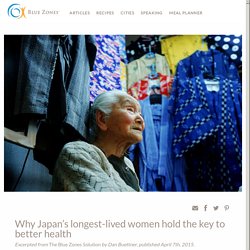 It took me two days to convince Gozei Shinzato to show me her arsenal of longevity supplements, but, in the end, she delivered. Before me lay at least five compounds that could explain how the spry centenarian had eluded the diseases of aging to reach her 104th year with the flexibility of a yogi and the frenetic energy of a Chihuahua. She showed me one supercharged supplement that fights breast cancer by reducing blood estrogen; a proven antimalarial agent that she uses to keep her stomach healthy; and another supplement that has been shown to help regulate metabolism, maintain low blood pressure, treat gallstones, and work as a prophylactic for hangovers.

While this may sound like the inventory of a well-stocked medicine cabinet, we were actually standing in Shinzato’s kitchen garden. Longevity Lessons from The Blue and 'unBlue' Zones - Intensive Dietary Management (IDM) The Okinawa Diet: Eating and Living to 100 - Blue Zones. Okinawa is one of the Blue Zones regions and has some of the highest life expectancy rates in the world. 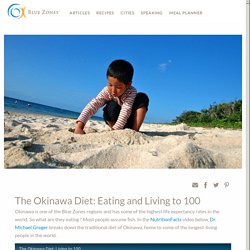