Harvard Researchers Say This One Tiny Life Adjustment Can Reduce Depression Risk. In any given year, one in five Americans will have a diagnosable mental health condition, and 2020 and 2021 were anything but “any given years.” 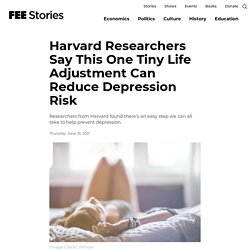 Research continues to pour in showing an increase in mental health problems from the COVID-19 pandemic (and government policies resulting from it). One medical study found that depression symptoms were three times higher than before the pandemic. A separate survey published by the Washington Post found one third of Americans now show symptoms of anxiety, depression, or both. Depression Insights: Mitochondria Affect Mood - Wellness Resources. Treating Depression With Exercise? Reduce Depression with Posture. Researchers have found evidence suggesting that feelings of depression can be lessened simply by sitting up straight, rather than slouching. 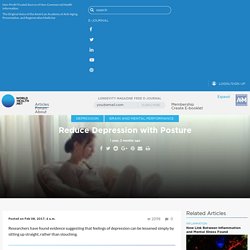 It’s estimated that between 7% and 10% of the American population suffers from some type of depression. While many seek treatment through the use of anti-depressant drugs, a growing number of people look for non-drug related therapies. Exercise, acupuncture, meditation, yoga, light therapy, and diet among others have been included in that group of remedies. 7 Facts About Depression That Will Blow You Away. Is Depression a Disease—or a Symptom of Inflammation? 13 Important Blood Tests to Get Done If You Have Depression — Optimal Living Dynamics. A fasting glucose blood test can provide a snapshot of how much sugar is present when your body isn’t processing food. 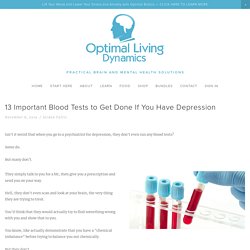 You can order the test here. A fasting insulin blood test is also important, as it tells you how your pancreas is working when you’re not eating anything. Research shows that depressive symptoms are associated with fasting insulin resistance (91). How to Help Prevent & Treat Suicidal Thoughts. Social isolation and feeling very lonely, trapped and hopeless are some of the most common warning signs that someone could be heading toward having suicidal thoughts. 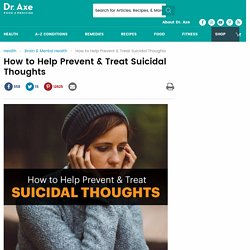 Every year in the U.S. alone there are more than 40,000 completed suicides and many more partial attempts. Millions of family members, friends, teachers and therapists are left behind in the wake of such suicidal actions, wondering what could have possibly been done to prevent them. Some reports show that hundreds of thousands of people attempt suicide each year, most of which suffer from major depression beforehand, but might never have been diagnosed. It’s estimated that 25 percent to 35 percent of all suicides are directly due to depression. Lifestyle Interventions for Depression.

Clinical depression, where sad mood and/or lack of interest in usual activities persists among other symptoms to lead to inability to function in normal life, substance abuse, and even suicidal thoughts, is a complicated condition. 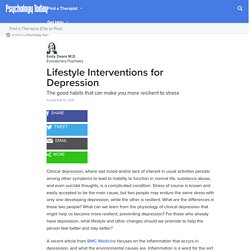 Stress of course is known and easily accepted to be the main cause, but two people may endure the same stress with only one developing depression, while the other is resilient. What are the differences in these two people? What can we learn from the physiology of clinical depression that might help us become more resilient, preventing depression?

For those who already have depression, what lifestyle and other changes should we promote to help the person feel better and stay better? A recent article from BMC Medicine (link is external) focuses on the inflammation that occurs in depression, and what the environmental causes are. Dysthymia: 7 Natural Ways to Cope with Chronic Depression. By Katherine Brind’Amour, PhD Dysthymia — also known as persistent depressive disorder, chronic depression, or dysthymic disorder — is a long-lasting form of clinical depression. 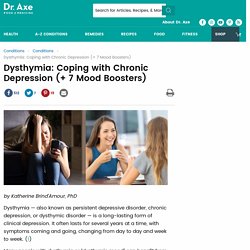 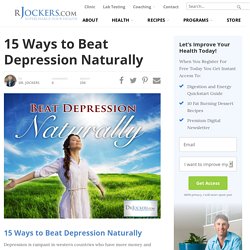 About 1 in 4 adults in the U.S., more than 26% of the population, suffers from a diagnosable mental disorder. Anxiety afflicts more than 40 million Americans. Nearly 10% of the U.S. adult population has a mood disorder for which powerful drugs are prescribed. (That’s about 30 million people on psychiatric drugs!) Natural Remedies For Depression: 13 Ways to Recover. The World Health Organization predicts that depression will become the second most prevalent disease worldwide by the year 2020. 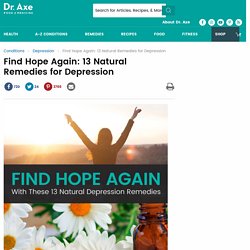 But what are we doing to prevent and treat this life-altering mood disorder? The typical treatment — antidepressant medications — comes with a slew of side effects. Signs of Depression: Know These 12 Signs + The Anti-Depression Diet. Did you know that depression is predicted to be the leading cause of disease burden by 2030? 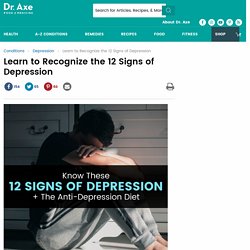 In fact, it’s already the leading cause in women worldwide. When including depressive-related deaths due to suicide and stroke, depression has the third highest global disease burden. (1) For people with depression, their negative thoughts overshadow all of their thoughts and actions. Some people have such severe depression that they lack the energy to get help and they may have suicidal thoughts without anyone noticing. Being aware of the signs of depression can help you to determine whether or not you or a loved one needs support and treatment.

6 Strategies to Eliminate Depression. “I’ve struggled with depression for years, and my doctor wants to put me on yet another anti-depressant,” my reader writes. 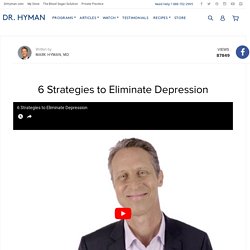 “Are drugs, and the side effects they bring, my only option?” If you struggle with feeling hopeless, sad, or otherwise mentally fragile, you’re not alone. More than 100 million Americans – that’s literally one in three – struggle through life with a depression. Depression - Caused by Inflammation, Thus Like Other Diseases of Civilization. Evolutionary Psychiatry: Depression crashed your party. I've told you before I like Dr. Maes. Turns out he's been working the depression = inflammation angle for the past twenty years, isolating all the cellular mechanisms while we were all busy getting bored by drug reps peddling their newest serotonin reuptake inhibitors. Maes is not only brilliant, but cranky. The main page of his website is devoted to accusing a Dr. The Different Types of Depression and How to Start Healing. Evolutionary Psychiatry: New Study on Vitamin D and Depression. Quite a bit of feedback on my rant from yesterday.

In truth I would probably keep these rants to myself, except I keep getting asked about what I think about certain matters, so I'm assuming there is wider interest in these opinions. The rants garner big audiences, for what it is worth. If you don't like them but enjoy the more sciencey stuff, you can stick to my Psychology Today blog, as I doubt the rants will get cross-posted over there. To answer and clarify some general questions from the comments: (Sleeper Agent Get Burned) I'm not expecting to rain on anyone's parade.