Breastfeeding and the Gut Microbiome

Breast-Feeding the Microbiome. This is an edited excerpt from “I Contain Multitudes: The Microbes Within Us and a Grander View of Life,” which will be published on August 9th by Ecco, an imprint of HarperCollins Publishers. 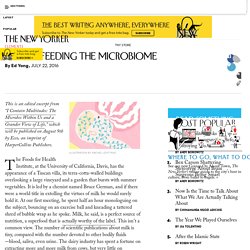 The Foods for Health Institute, at the University of California, Davis, has the appearance of a Tuscan villa, its terra-cotta-walled buildings overlooking a large vineyard and a garden that bursts with summer vegetables. It is led by a chemist named Bruce German, and if there were a world title in extolling the virtues of milk he would surely hold it.

At our first meeting, he spent half an hour monologuing on the subject, bouncing on an exercise ball and kneading a tattered shred of bubble wrap as he spoke. Milk, he said, is a perfect source of nutrition, a superfood that is actually worthy of the label. This isn’t a common view. Milk is a mammalian innovation, common to platypuses and pangolins, humans and hippos, its ingredients varying according to what each species needs. More than 700 bacteria live in breast milk. As already mentioned on this blog, we are born sterile and our gut microbiota begins to develop at birth. 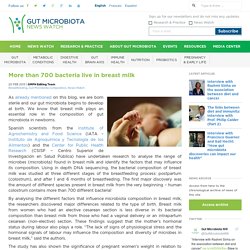 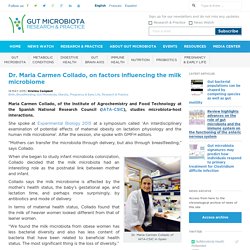 She spoke at Experimental Biology 2015 at a symposium called ‘An interdisciplinary examination of potential effects of maternal obesity on lactation physiology and the human milk microbiome’. After the session, she spoke with GMFH editors. “Mothers can transfer the microbiota through delivery, but also through breastfeeding,” says Collado. Dr. Breast milk sugars stimulate the activity of gut bacteria, promoting healthy infant growth - Gut Microbiota for Health. Nearly 3.1 million children under five die every year due to poor nutrition, according to the World Food Programme, the world’s largest humanitarian agency fighting hunger. 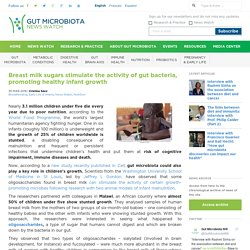 One in six infants (roughly 100 million) is underweight and the growth of 25% of children worldwide is stunted, a disabling consequence of malnutrition and frequent or persistent infections that undermine children’s health and put them at risk of cognitive impairment, immune diseases and death. The researchers partnered with colleagues in Malawi, an African country where almost 50% of children under five show stunted growth.

Breast milk ingredient “trains” gut to provide health. As we have explained before in this blog, breast milk is one major way in which an infant’s gut microbiota starts developing. 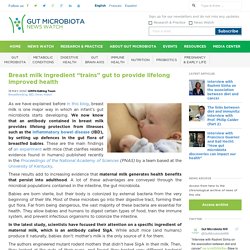 We now know that an antibody contained in breast milk provides lifelong protection from illnesses such as the inflammatory bowel disease (IBD), by setting up defences in the gut flora of breastfed babies. These are the main findings of an experiment with mice (that clarifies related evidence found in humans) published recently in the Proceedings of the National Academy of Sciences (PNAS) by a team based at the University of Kentucky. These results add to increasing evidence that maternal milk generates health benefits that persist into adulthood. Breast Milk Primes Gut for Microbes. WIKIMEDIA, SEWERYN OLKOWICZImmunoglobulin G (IgG) antibodies in breast milk prevent immune responses against the essential microbes that colonize the newborn mouse gut, according to researchers at the University of California (UC), Berkeley, and their colleagues. 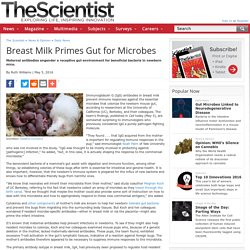 The team’s findings, published in Cell today (May 3), are somewhat surprising to immunologists who previously considered IgG a purely pathogen-fighting molecule. “They found . . . that IgG acquired from the mother is important for regulating immune responses in the pup,” said immunologist Noah Palm of Yale University who was not involved in the study. “IgG was thought to be mostly involved in protecting against [pathogenic] infection,” he added, “but, in this case, it is actually shaping the response to the commensal microbiota.” Human breast milk: the first food for an infant's microbiota - Gut Microbiota for Health. Characterizing the gut microbiota of breastfeeding mothers. In this study, researchers characterized the gut microbiota of breastfeeding mothers after collecting fecal samples from 2 days to 6 months postpartum. 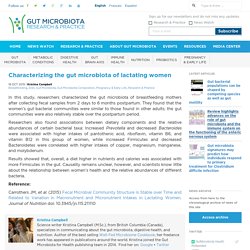 They found that the women’s gut bacterial communities were similar to those found in other adults; the gut communities were also relatively stable over the postpartum period. Researchers also found associations between dietary components and the relative abundances of certain bacterial taxa: Increased Prevotella and decreased Bacteroides were associated with higher intakes of pantothenic acid, riboflavin, vitamin B6, and vitamin B12 in this group of women, while increased Firmicutes and decreased Bacteroidetes were correlated with higher intakes of copper, magnesium, manganese, and molybdenum. Results showed that, overall, a diet higher in nutrients and calories was associated with more Firmicutes in the gut. Reference: New insights on the potential of gut bacteria and breast milk oligosaccharides to prevent childhood malnutrition - Gut Microbiota for Health.

Childhood undernutrition affects millions of children worldwide and has long-term severe effects, which include stunted growth and impaired cognitive development, among others. 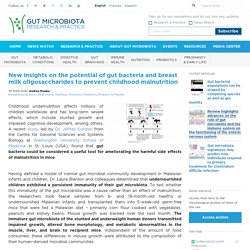 A recent study, led by Dr. Jeffrey Gordon from the Centre for Genome Sciences and Systems Biology at Washington University School of Medicine in St. Louis (USA), found that gut bacteria could be considered a useful tool for ameliorating the harmful side effects of malnutrition in mice. Having defined a model of normal gut microbial community development in Malawian infants and children, Dr. Laura Blanton and colleagues determined that undernourished children exhibited a persistent immaturity of their gut microbiota. Moreover, mice that had received microbiota from healthy children were allowed to live together with mice that had received microbiota from undernourished children. These experiments indicate a causal and microbiota-dependent relationship between S-BMO and growth promotion.

Benefits of breast milk go beyond infant nutrition - Gut Microbiota for Health. Humans may have the most complex breast milk of all mammals. 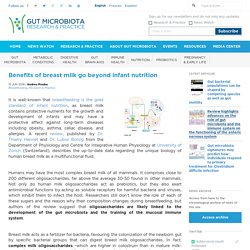 It comprises close to 200 different oligosaccharides, far above the average 30-50 found in other mammals. Not only do human milk oligosaccharides act as prebiotics, but they also exert antimicrobial functions by acting as soluble receptors for harmful bacteria and viruses, which inhibit them to infect the host. Researchers still don’t know the role of each of these sugars and the reason why their composition changes during breastfeeding, but authors of the review suggest that oligosaccharides are likely linked to the development of the gut microbiota and the training of the mucosal immune system. Breast milk acts as a fertilizer for bacteria, favouring the colonization of the newborn gut by specific bacterial groups that can digest breast milk oligosaccharides. A recent study, led by Prof. Researchers are careful to note that these findings do not translate directly into specific breastfeeding recommendations. Maturation of the Infant Microbiome.

WIKIMEDIA, KEN HAMMOND, PD-USGOV-USDALike babies themselves, the intestinal microbiomes of infants start out in an immature state and over time grow into communities similar to those of adults. 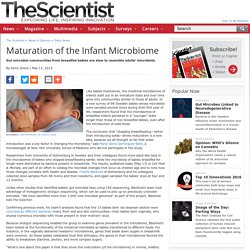 In a new survey of 98 Swedish babies whose microbiota were sampled several times during their first year of life, researchers found that the microbiomes of breastfed infants persisted in a “younger” state longer than those of non-breastfed babies, even after the introduction of solid foods. The conclusion that “stopping breastfeeding—rather than introducing solids—drives maturation is a new idea, because we all thought so far that solids introduction was a key factor in changing the microbiota,” said Maria Gloria Dominguez-Bello, a microbiologist at New York University School of Medicine who did not participate in the study. Bäckhed said the study cannot determine whether any particular microbial profile is better for babies than another. F. Bacteria from infants’ microbiome metabolize breast milk differently. — The American Microbiome Institute. Human milk oligosaccharides (HMOs) are a diverse group of carbohydrates found in breastmilk. Because the HMOs can’t be used by the infant directly for energy, scientists believe their purpose is to stimulate the development of a healthy gut microbiome.

During the first year of life, an infant’s gut is dominated by Bifidobacteria, in particular B. infantis, and B. bifidum. In a recent publication scientists measured the difference in HMO utilization between these bugs, and discovered they have very different and important strategies for HMO utilization. The results were published in Nature Scientific Reports. The scientists first isolated multiple strains of each species, B. infantis and B. bifidum, from the feces of newborn infants.

Infants’ saliva may react with breast milk to modulate their microbiomes — The American Microbiome Institute. Breastmilk is critically important to developing a healthy infant gut microbiome. The combination of oligosaccharides found in breastmilk are not found in any other individual food, and are intended to cultivate healthy bacteria in the gut. Besides breast milk, really the only other fluid an infant consumes is his or her own saliva, but thus far not much is known about the role this saliva plays in culturing the proper microbiota.

A team of researchers from Australia recently studied how a mother’s breastmilk directly interacts with her infant’s saliva. Cooling Inflammation: Breast Is Still Best, but Second Best is Donor Milk Banks. Milk is a baby's first prebiotic and a major function of mother's milk is to prevent adult gut bacteria from inflaming a newborn's gut, before the gut is sealed up and a new immune system is developed. Formula companies scurry to get parents hooked on their expensive substitutes that promise ease of use and nutritional equivalence, but the sad truth is that these artificial milk substitutes undermine baby gut flora with tragic results. Even in the rare cases where mothers are not able to breastfeed their babies, there is a safe alternative, donor milk banks.

This post is a plea for new parents to wise up and smell the poop. You may need to tell hospital staff that you will be checking diapers and taking names to make sure that your baby only gets your breast milk. Background: Up Close and Personal Birth and Breastfeeding. Breastfeeding associated with intelligence later in life — The American Microbiome Institute. Editor’s note: I would like to tread very lightly on this topic because of the complexity of the relationships between all the factors discussed and the implications a study like this has. I probably would not have written about it at all, had it not been published in such a prestigious medical journal, and had been as comprehensive as it was.