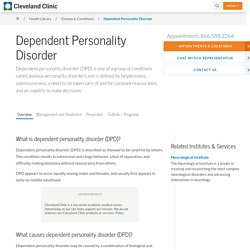 When we think of Black History, our perception is limited to Martin Luther King, slavery, and civil rights marches. 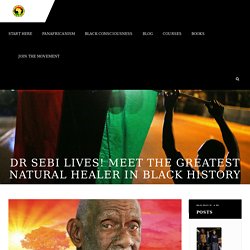 But our history is rich with unsung heroes who have taken our knowledge of science, medicine, and philosophy to new heights. One such hero is Dr. Sebi – the greatest healer the Black race has produced since Imhotep. Dr. Sebi - Diet Plan, Alkaline Electric Living, Cleansing, and Eating Guide. DR SEBI on The Rock Newman Show. How Men and Women See the Workplace Differently. One obvious reason is reflected in the numbers. 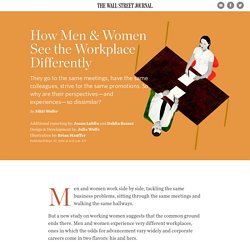 At most companies, according to the McKinsey and Lean In study, women and men are represented roughly equally at the entry level, and they lobby for promotions at the same rate. But women are less likely to get those promotions. They also receive fewer challenging “stretch” assignments, less training and fewer development opportunities than men. SAP SE is one of the few companies to set a firm target for increasing the presence of women managers. The global software giant, with 80,000 employees, has mandated that women hold 25% of all manager roles by the end of 2017; so far, its world-wide management ranks are 24.1% female, while roughly 30% of management roles in the U.S. and Canada are held by women. Jenny Dearborn, chief learning officer at SAP, considers a big part of her mission to be equipping female employees with the skills they need to reach the management ranks. Employees rated the training highly. Ms. Workplace gender inequality is negatively impacting girls' professional aspirations.

Among the report's findings: One in four (24%) girls aged 15-17 do not feel motivated to pursue their dream career because they are concerned they will be compensated less than their male counterparts One in four (25%) girls aged 15-17 in Canada report that they do not know any female role models who have their dream job Two in ten girls (19%) agree that their teachers treat them differently in class because they're a girl One in ten girls (12%) agree that an adult – whether it's a teacher, coach or parent – has excluded or prevented them from joining a club or team specifically because they're a girl. 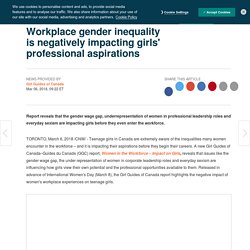 Chicago Tribune - We are currently unavailable in your region. Are societal expectations on gender roles limiting the potentials of girls and boys? Very often, when discussing the negative impact of social constructions on women and girl’s potentials, the assumption is that it is all about the battle of the sexes: who can and who should do what. 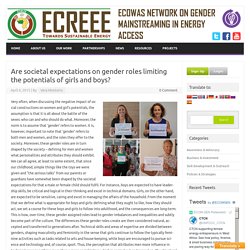 Moreover, the norm is to assume that ‘gender’ refers to women. It is, however, important to note that ‘gender’ refers to both men and women, and the roles they offer to the society. Moreover, these gender roles are in turn shaped by the society – defining for men and women what personalities and attributes they should exhibit. We can all agree, at least to some extent, that since our childhood, simple things like the toys we were given and “the serious talks” from our parents or guardians have somewhat been shaped by the societal expectations for that a male or female child should fulfil. Changing Gender Roles in Marriage. Most married couples develop a shared understanding of who does what in their relationship. 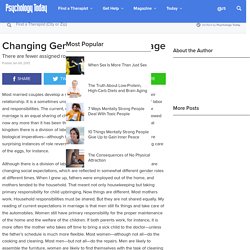 It is a sometimes unspoken recognition of an inevitable division of labor and responsibilities. The current, commonly agreed, “politically correct” plan for marriage is an equal sharing of chores and other duties; but this plan is not followed now any more than it has been throughout history. In fact, in much of the animal kingdom there is a division of labor which grows inescapably out of different biological imperatives—although here and there in the animal kingdom there are surprising instances of role reversal.

Sometimes the male is charged with taking care of the eggs, for instance. Are men and women's roles in society changing? Among the many news stories dedicated to the recession that gripped the United States in the late 2000s were several pieces that asked whether the economic downturn had led to a change in traditional gender roles. 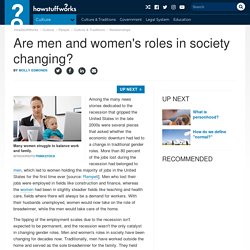 More than 80 percent of the jobs lost during the recession had belonged to men, which led to women holding the majority of jobs in the United States for the first time ever [source: Rampell]. Men who lost their jobs were employed in fields like construction and finance, whereas the women had been in slightly steadier fields like teaching and health care, fields where there will always be a demand for workers. Mr. Mom. The film follows an unemployed Detroit engineer becoming a stay-at-home dad and taking care of three young children, after his wife lands a job and returns to the advertising business as an executive at a big advertising agency. 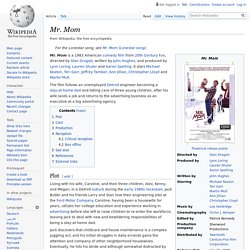 Plot[edit] Living with his wife, Caroline, and their three children, Alex, Kenny, and Megan, in a Detroit suburb during the early 1980s recession, Jack Butler and his friends Larry and Stan lose their engineering jobs at the Ford Motor Company. 8 Realities About Being a Stay-at-Home Dad You May Find Surprising. Why So Many Stay-at-Home Dads Are Depressed. Top 10 Misconceptions About Stay-at-Home Dads. Even though it's becoming more accepted, stay-at-home dads often find themselves the target of criticism or judgment. 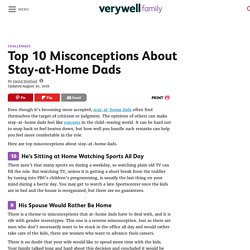 The opinions of others can make stay-at-home dads feel like outcasts in the child-rearing world. It can be hard not to snap back or feel beaten down, but how well you handle such remarks can help you feel more comfortable in the role.