Love and marriage in Pride and Prejudice. It can be used, not only with language learners, but also with Literature and Language groups at higher education level, TESOL students doing literature modules and in teacher training contexts. 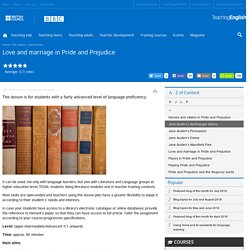 Most tasks are open-ended and teachers using this lesson plan have a greater flexibility to adapt it according to their student s’ needs and interests. In case your students have access to a library’s electronic catalogue or online databases, provide the reference to Hinnant’s paper so that they can have access to full article. Tailor the assignment according to your course/programme specifications. Level: Upper-intermediate/Advanced /C1 onwards Time: approx. 90 minutes Main aims: To critically analyse Austen’s stance towards marriage in her societyTo introduce/review/expand students’ use of collocations Subsidiary aims: To help students to develop critical and analytical reading skillsTo engage students with literary criticism on Austen’s workTo improve students formal /academic writing skills. Playing Pride and Prejudice. Historical Context for Pride and Prejudice by Jane Austen. Late Eighteenth-Century Britain and the Regency Period Jane Austen’s brief life and writing career overlapped with one of the most transformative eras in British history, marked by revolution abroad and unrest at home.

The signing of the Declaration of Independence in 1776, the year after Austen’s birth, signaled the start of the American Revolution, followed in the next decade by the beginning of the French Revolution in 1789. For the next two decades, Britain was engaged almost without cease in the Revolutionary and Napoleonic Wars of 1793–1815, one of the most significant conflicts in British history. Among the effects of England’s foreign wars during this period were great financial instability and monetary volatility.

Status, rank and class in Jane Austen's novels. Questions of status and class are a major preoccupation of Jane Austen’s characters, and of the novels themselves. 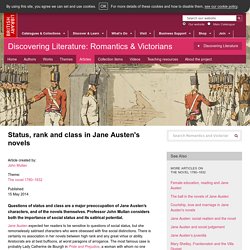 Professor John Mullan considers both the importance of social status and its satirical potential. Jane Austen expected her readers to be sensitive to questions of social status, but she remorselessly satirised characters who were obsessed with fine social distinctions. There is certainly no association in her novels between high rank and any great virtue or ability. Aristocrats are at best buffoons, at worst paragons of arrogance. The most famous case is probably Lady Catherine de Bourgh in Pride and Prejudice, a woman with whom no one before Elizabeth Bennet has ever disagreed. ‘Rank is rank’, Mr Elliot tells Anne in Persuasion, explaining why the company of her father’s cousin, the vapid Lady Dalrymple, and her awkward daughter is to be desired (ch. 16).

Sir Walter Elliot’s reading of the Debrett’s Baronetage alerts us to his anxious attention to status. Gentlemen. Jane Austen and social judgement. Jane Austen’s characters are continually watching, judging and gossiping about others and, in turn, are watched, judged and gossiped about. Professor Kathryn Sutherland explores the ways in which behaviour and etiquette are closely monitored in the novels, and how characters must learn to be skilful readers of those around them. Professor Kathryn Sutherland considers Jane Austen’s portrayal of female characters and her harshly moralistic outlook.

Filmed at Jane Austen’s House Museum, Chawton. Jane Austen depicts a society which, for all its seeming privileges (pleasant houses, endless hours of leisure), closely monitors behaviour. Her heroines in particular discover in the course of the novel that individual happiness cannot exist separately from our responsibilities to others. The Elegant Girl The Elegant Girl (1817) is a collection of engravings showing suitable activities for a wealthy young girl. View images from this item (12) How to Teach "Pride and Prejudice" One of the most popular books in English literature, Jane Austen's Pride and Prejudice uses satire and irony to critique Regency Era society. 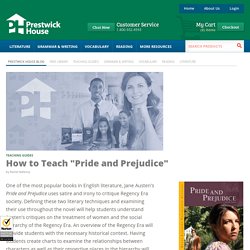 Defining these two literary techniques and examining their use throughout the novel will help students understand Austen's critiques on the treatment of women and the social hierarchy of the Regency Era. An overview of the Regency Era will provide students with the necessary historical context. Having students create charts to examine the relationships between characters as well as their respective places in the hierarchy will help students further understand the class system, an important aspect of this novel, as it is a source of "pride and prejudice". Taking a look at the many adaptions of the novel in the forms of both books and movies will both engage students and allow the opportunity for comparisons. This beloved classic has been transformed time and time again, each adaptation giving it new life.

How to Teach "Pride and Prejudice"