In the heat of battle over the skies of Viet Nam, everything went wrong, but cool-headed aviators managed to improvise on the spot to save themselves from becoming POWs.

• The painting depicted on the face of this collection is "Pardo's Push" by S.W. 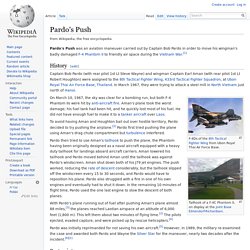 In March 1967, they were trying to attack a steel mill in North Vietnam just north of Hanoi. On March 10, 1967, the sky was clear for a bombing run, but both F-4 Phantom IIs were hit by anti-aircraft fire. Aman's plane took the worst damage; his fuel tank had been hit, and he quickly lost most of his fuel. To avoid having Aman and Houghton bail out over hostile territory, Pardo decided to try pushing the airplane.[2] Pardo first tried pushing the plane using Aman's drag chute compartment but turbulence interfered. Postscript[edit] See also[edit] Pardo's Push Archives - This Day in Aviation. Major John R. 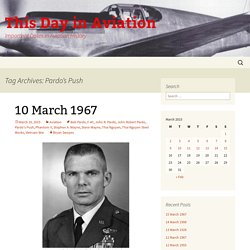 Pardo distinguished himself by gallantry in connection with military operations against an opposing armed force over North Vietnam on 10 March 1967. On that date, Major Pardo was flying as the pilot of the lead element on the return from a 1,000 mile flight in which heavy flak damage was encountered. He noticed that his wingman’s aircraft was in trouble and was advised that the aircraft was extremely low on fuel. Realizing that the wingman’s aircraft would not make it out of North Vietnam, Major Pardo implemented maneuvers to literally push the aircraft across the border.

The attempt was successful and consequently allowed the crew to avoid becoming prisoners of war. First Lieutenant Stephen A. Bob Pardo: Stuck Between a Medal and a Court Martial. By Di Freeze With a little more than 17,000 flight hours, including time spent in Southeast Asia and corporate flying, Bob Pardo says he’ll never have as much flying time as a lot of other people. 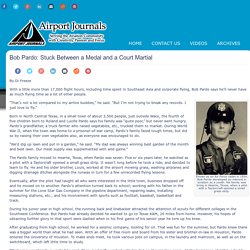 Shown as an Air Force cadet in 1954, Bob Pardo developed an interest in aviation as a youth. Bob Pardo: Stuck Between a Medal and a Court Martial (part 2) By Di Freeze Finale Last month, we left Captain Bob Pardo in a harrowing situation. 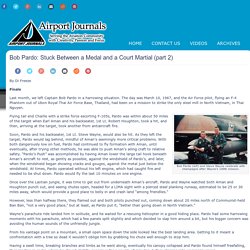 The day was March 10, 1967, and the Air Force pilot, flying an F-4 Phantom out of Ubon Royal Thai Air Force Base, Thailand, had been on a mission to strike the only steel mill in North Vietnam, in Thai Nguyen. Bob Pardo (left) and Steve Wayne celebrate with champagne after Wayne’s 100th mission. The Tactical Air Network. “There are pilots who fly fighters, and there are fighter pilots. 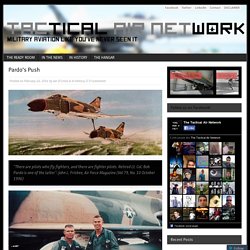 Retired Lt. Col. Bob Pardo is one of the latter.”- John L. Frisbee, Air Force Magazine (Vol 79, No. 10 October 1996) Capt. On the 10th of March, 1967 the skies were bright and clear over Vietnam. As the jets of the strike force got closer to their target, anti-aircraft fire erupted from numerous enemy emplacements on the ground. Reducing a little power on the throttles 75 miles away from their target, WHACK WHACK WHACK! Both pilots added power and pulled back on the stick, bringing their stricken Phantoms to 30,000 feet. There was a precedent to this insane maneuver. Pardo's Push. By Tech. 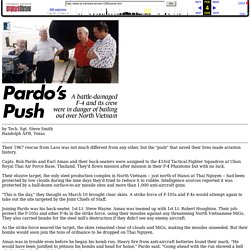 Sgt. Steve Smith Randolph AFB, Texas Their 1967 rescue from Laos was not much different from any other, but the "push" that saved their lives made aviation history. Capts. Bob Pardo and Earl Aman and their back-seaters were assigned to the 433rd Tactical Fighter Squadron at Ubon Royal Thai Air Force Base, Thailand. Their elusive target, the only steel production complex in North Vietnam -- just north of Hanoi at Thai Nguyen -- had been protected by low clouds during the nine days they'd tried to reduce it to rubble. "This is the day," they thought as March 10 brought clear skies. Pardo's Push: An Incredible Feat of Airmanship. Sitting in two F-4 Phantoms, the four American airmen awaited their takeoff orders. 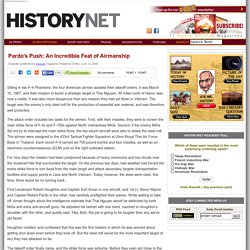 It was March 10, 1967, and their mission to bomb a strategic target in Thai Nguyen, 30 miles north of Hanoi, was now a reality. It was also more dangerous than any mission they had yet flown in Vietnam. The target was the enemy's only steel mill for the production of essential war materiel, and was therefore well protected. The attack order included two tasks for the airmen. First, with their missiles, they were to screen the main strike force of F-4s and F-105s against North Vietnamese MiGs. For nine days the mission had been postponed because of heavy monsoons and low clouds over the clustered hills that surrounded the target. First Lieutenant Robert Houghton and Captain Earl Aman in one aircraft, and 1st Lt. 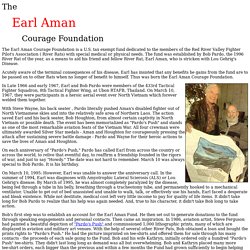 The fund was established by Bob Pardo, the 1996 River Rat of the year, as a means to aid his friend and fellow River Rat, Earl Aman, who is stricken with Lou Gehrig's Disease. Acutely aware of the terminal consequences of his disease, Earl has insisted that any benefits he gains from the fund are to be passed on to other Rats when no longer of benefit to himself. In Late 1966 and early 1967, Earl and Bob Pardo were members of the 433rd Tactical Fighter Squadron, 8th Tactical Fighter Wing, at Ubon RTAFB, Thailand. 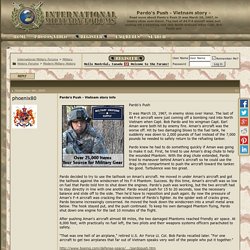 The last of 44 F-4 aircraft were just coming off a bombing raid into North Vietnam when Capt. Bob Pardo and his wingman Capt. Valor: Pardo's Push. There are pilots who fly fighters, and there are fighter pilots. 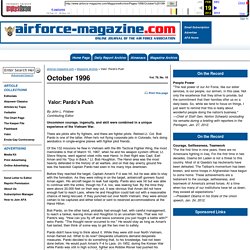 Retired Lt. Col. Bob Pardo is one of the latter. When he's not flying corporate jets in Colorado, he's doing aerobatics in single-engine planes with fighter pilot friends. Of the 132 missions he flew in Vietnam with the 8th Tactical Fighter Wing, the most memorable is that of March 10, 1967, when he and his weapon system officer, Lt. Pardo Push - TV Tropes. Pardo Push 2.