How these social robots are helping autistic kids. At the Duck’s Nest preschool in Oakland, Calif., a fluffy blue robot asks a group of toddlers, “I want to be your friend. 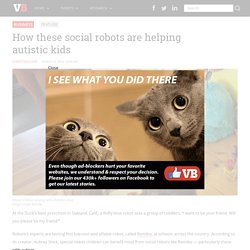 Will you please be my friend?” Robotics experts are testing this low-cost and affable robot, called Romibo, at schools across the country. According to its creator, Aubrey Shick, special-needs children can benefit most from social robots like Romibo — particularly those with autism. Indeed, behavioral experts say that human facial features can overwhelm those with an autism spectrum disorder (ASD). Researchers at Vanderbilt University found that autistic children are more comfortable looking at a robot than a human therapist. “The robot is safe. “There’s not so much to figure out with talking to a robot, where there was a lot to figure out in talking to a human being.” Above: The Romibo “social robot” And when used in a clinical setting, these talking robots may even help diagnose autism earlier. Social robotics for the mass market Above: The Nao robot. AWESOME Robots that can Help People. Robots Rule! Bionic robots! 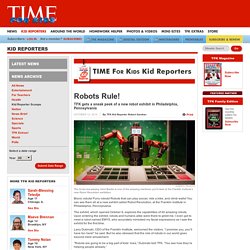 Furry robots! Robots that can play soccer, ride a bike, and climb walls! You can see them all at a new exhibit called Robot Revolution, at the Franklin Institute in Philadelphia, Pennsylvania. The exhibit, which opened October 8, explores the capabilities of 40 amazing robots. Upon entering the exhibit, robots and humans alike were there to greet me. Larry Dubinski, CEO of the Franklin Institute, welcomed the visitors. “Robots are going to be a big part of kids’ lives,” Dubinski told TFK.

John Beckham, a.k.a. the Robot Hunter, traveled the world hand-picking robots to display at the exhibit. Beckham welcomed museumgoers with the help of Darwin, a small humanoid robot. Meet the ‘Bots It wouldn’t be the Franklin Institute without hands-on activities galore. I also played the card game “21” with a robot named Yaskawa. There was something new at every corner, including an impressive robot named “Cube Solver.” Robots and the Environmental Future. A robotic float looking for clues for Global Warming Photo Source: www.fondriest.com Robotic innovations are helping scientists understand and combat environmental threats such as pollution and global warming. 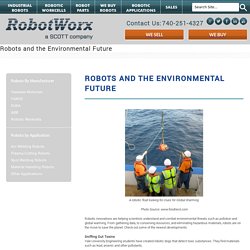 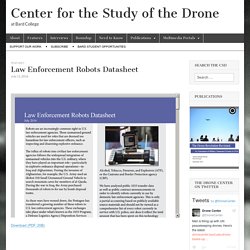 These unmanned ground vehicles are used for roles that are deemed too hazardous for law enforcement officers, such as inspecting and disarming explosive ordnance. The influx of robots into civilian law enforcement agencies follows the widespread integration of unmanned vehicles into the U.S. military, where they have played an important role—particularly in explosive ordnance disposal operations—in Iraq and Afghanistan.

During the invasion of Afghanistan, for example, the U.S. As these wars have wound down, the Pentagon has transferred a growing number of these robots to U.S. law enforcement agencies. Besides the 1033 Program, law enforcement agencies have also acquired robots using federal funds from the Department of Justice or Department of Homeland Security. Findings: 1033 Program Agencies in 43 states received transfers. Federal Contracts and Grants 1033 Data. Robotics. How Robots Are Revolutionizing Our World - presented by T. Rowe Price and SlateCustom. Photo by iStockphoto/Thinkstock Images MCT via Getty Images We're all familiar with images of lurching robots performing rote tasks on the factory production lines. 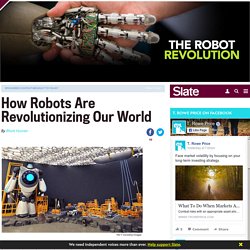 But the capabilities of robots have evolved well beyond the banality of those grainy industrial films. Today's industrial robots have incredible dexterity to match their brute strength, and can actually learn on the job. And then there’s an entirely new breed of robots—some in humanoid form, and others that take highly practical forms all their own—that can walk, talk, save lives, and perform critical jobs in extreme environments, or simply take care of mundane tasks at home while we’re out enjoying our lives. From healthcare and homecare, to military use and emergency response, robots are fast becoming a fixture in our lives.

For years now, robots have worked tirelessly in the shadows to increase or enhance the productivity of humans. The evolution of robotics can be divided roughly into two phases.