What creativity looks like in the brain - Business Insider. Could creativity and socializing preserve your memory? Pursuing creative passions and favorite activities into old age could preserve your mind and stave off dementia, according to a new study in Neurology, a medical journal of the American Academy of Neurology. 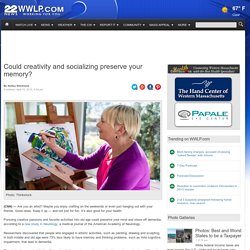 Researchers discovered that people who engaged in artistic activities, such as painting, drawing and sculpting, in both middle and old age were 73% less likely to have memory and thinking problems, such as mild cognitive Impairment, that lead to dementia. The study also revealed that craft-based activities such as sewing, woodworking and ceramics in midlife and old age, were 45% less likely to encounter cognitive issues. This is your brain on crafting Socializing with others or going to the movies, concerts, book clubs and traveling made the participants 55% less likely to develop MCI. Using a computer later in life also reduced their risk by 53%.

Mayo Clinic’s National Institute on Aging carried the study out over four years and focused on 256 patients who had a median age of 87. 3 Ways To Train Yourself To Be More Creative. What makes someone good at their job? 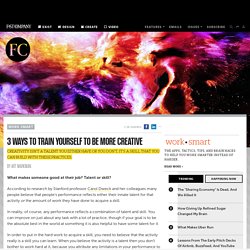 Talent or skill? Creativity brings sense of normalcy for young refugees in Iraqi Kurdistan (PHOTOS) International Media Support (IMS) Last updated: April 15, 2015 “I can’t be the girl from the camp all the time.” 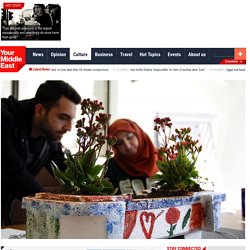 Asmaa and the other girls either internally displaced, Syrian refugees or from the local community, were asked to paint on non-recyclable items, which were then folded into plant pots, with each potted plant intended a symbol of unity for the girls who come from a variety of religious backgrounds and nationalities. “Displacement is not only having to leave your country, but to be forced to deny your identity because you are an unaccepted minority,” says Asema, a young Yazidi girl, who describes how she crossed the Sinjar Mountains in northern Iraq with her family to escape Islamic State. She witnessed women being kidnapped in her village and the death of her younger sister caused by the harsh conditions the family faced fleeing. Now she is drawing to express herself and deal with the emotional aftermath of her traumatic experiences.

Yes, Science Shows Creative People Are More Likely to Be Crazy. How You're Sabotaging Your Creativity Every Day. Amazing Place shows that creativity outlasts memory - Houston Chronicle. Recent studies are now supporting what participants at Amazing Place, Houston's day program for adults with mild to moderate dementia, have been demonstrating all along. 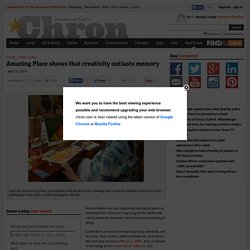 Creativity is an area of strength spared by dementia, and for some, their creative ability is enhanced, according to the work and research of Bruce L. Miller, M.D., professor of neurology at the University of California, San Francisco and clinical director of aging and dementia. Each day at Amazing Place, participants with dementia are showing how creativity outlasts memory as they participate in the many creative programs offered. Want to Be More Creative? Get Out the Electrodes - Pacific Standard. Many a blocked writer or frustrated inventor has wished there was a simple way to stimulate his or her brain to boost creativity. 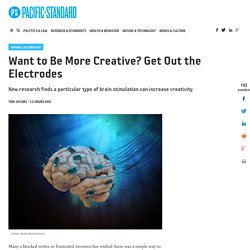 So it’s exciting to report that, in a new study, a specific type of electrical stimulation has produced that very result. Artificially activating “cortical oscillations in the alpha frequency band”—a type of brain wave that has previously been linked with creativity—leads to higher scores on a standard test measuring innovative thinking, according to researchers from the University of North Carolina-Chapel Hill. Their results suggest there are “specific neuronal dynamics that drive creativity, and can be modulated by non-invasive brain stimulation,” a team led by Flavio Fröhlich and Caroline Lustenberger writes in the journal Cortex. What is creativity? Decoding the DNA of pure creativity with Onedotzero’s Shane Walter. The Drum, in association with Millennial Media, has launched a campaign to decode the DNA of pure creativity. 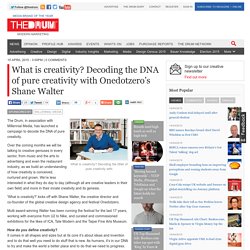 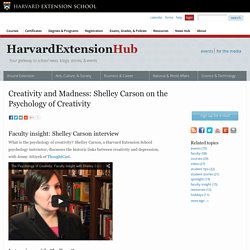 How to Encourage More Creative Thinking. Have you ever wished you were more creative? 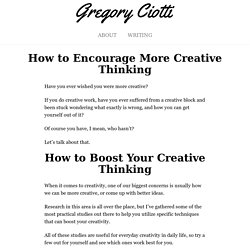 If you do creative work, have you ever suffered from a creative block and been stuck wondering what exactly is wrong, and how you can get yourself out of it? Of course you have, I mean, who hasn’t? Let’s talk about that. Why We Have More Courage to Create in the Middle Years. HistoryCreativity.pdf. Handmade - Nea { Jewelry & Wall Wear } { Bijoux & Broderie }

A Quick Course in Creativity. By Paul McNeese This quick course in creativity is designed to give you a platform to stand on as we look at the various ways you can handle home, social and workplace situations, job-search details and career-path decisions. 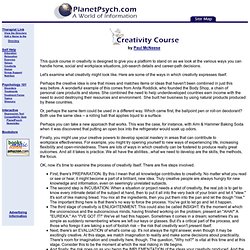 Let's examine what creativity might look like. Here are some of the ways in which creativity expresses itself. Perhaps the creative idea is one that mixes and matches items or ideas that haven't been combined in just this way before. A wonderful example of this comes from Anita Roddick, who founded the Body Shop, a chain of personal care products and stores. Or, perhaps the same item could be used in a different way.

Perhaps you can take a new approach that works. Finally, you might use your creative powers to develop special mastery in areas that can contribute to workplace effectiveness. OK, now it's time to examine the process of creativity itself. First, there's PREPARATION. Now let's look at the ten keys to creativity. 1. 2. 3. 4. 5. 6. 7. 8. 9. 10. Elizabeth Gilbert on nurturing creativity.