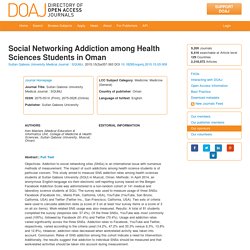 The impact of such addictions among health science students is of particular concern. 01Cabral. Development of a Facebook addiction scale1. JMIR-Browse by Year. Background: eHealth tools on the Internet have the potential to help people manage their health and health care. 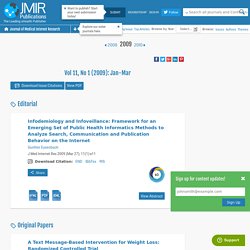 However, little is known about the distribution and use of different kinds of eHealth tools across the population or within population subgroups. Objective: The purpose of this study was to examine the prevalence and predictors of participation in specific online health-related activities. Methods: A secondary data analysis of the National Cancer Institute’s Health Information National Trends Survey (HINTS) 2005 was conducted to study three online behaviors among Internet users (n = 3244): searching for health information for oneself, participating in a support group for those with similar health or medical conditions, and purchasing medicine or vitamins.

Teens Addicted to Social Media. I attended an interview with Nancy Jo Sales about her book American Girls: Social Media and the Secret Lives of Teenagers, at the 2016 Woodstock Writers’ Festival. 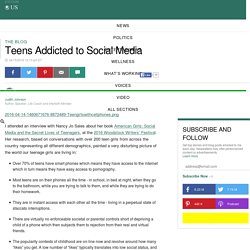 Her research, based on conversations with over 200 teen girls from across the country representing all different demographics, painted a very disturbing picture of the world our teenage girls are living in: Over 70% of teens have smart phones which means they have access to the internet which in turn means they have easy access to pornography. 21 Confessions From People Who Are Addicted To Social Media. Awake, alone and addicted ... to social media. The smell hit Drew Horo­witz before he even opened the door. 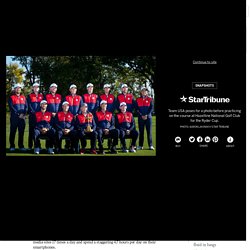 Inside this Maryland bedroom, a 19-year-old woman had isolated herself for months, barely eating, refusing to leave the room to shower, brush her teeth or even urinate. The scene had all the marks of a serious addiction intervention for Horowitz, a drug and alcohol assessment counselor. But this time was different: The drugs that had kept her awake and alone were her computer and social media. 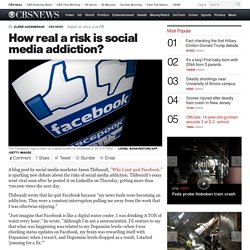 Thibeault's essay went viral soon after he posted it on LinkedIn on Thursday, getting more than 700,000 views the next day. Thibeault wrote that he quit Facebook because "my news feeds were becoming an addiction. They were a constant interruption pulling me away from the work that I was otherwise enjoying. " "Just imagine that Facebook is like a digital water cooler. I was drinking A TON of water every hour," he wrote.