Minori (SA) Minori is a town and comune in the province of Salerno in the Campania region of south-western Italy, situated on the Amalfi Coast. Etymology[edit] A view from the pier, January 2005 The origins of the name Minori come from its association in the past with the river that crosses it, La Rheggina, its ancient Latin name was Rheggina Minor. This name coincides with the name of the neighboring village Maiori, then known as Rheggina Maior. In time, it has come to be known simply as Minori. Airport[edit] The nearest airport is Salerno-Pontecagnano Airport (QSR). Main sights[edit] Basilica di Santa Trofimena. References[edit] See also[edit] External links[edit] Media related to Minori at Wikimedia Commons.

Ravello. Ravello is a town and comune situated above the Amalfi Coast in the province of Salerno, Campania, southern Italy, with approximately 2,500 inhabitants. It is a popular tourist destination due to its scenic beauty. History[edit] Ravello was founded in the 5th century as a shelter place against the barbarian invasions which marked the end of the Western Roman Empire. In the 9th century Ravello was an important town of the maritime republic of Amalfi, a producer of wool from its surrounding country that was dyed in the town and an important trading power in the Mediterranean between 839 and around 1200. In 1086. at the request of the Norman count Roger Borsa, who wished to create a counterweight to powerful Amalfi, Pope Victor III made Ravello the seat of diocese immediately subject to the Holy See, with territory split off from that of the archdiocese of Amalfi. Amalfi Coast. The Amalfi Coast (Italian: Costiera Amalfitana) is a stretch of coastline on the southern coast of the Sorrentine Peninsula in the Province of Salerno in Southern Italy.

The Amalfi Coast is a popular tourist destination for the region and Italy as a whole, attracting thousands of tourists annually.[1] During the 10th–11th centuries, the Duchy of Amalfi existed on the territory of the Amalfi Coast, centered in the town of Amalfi. The Amalfi coast was later controlled by the Principality of Salerno, until Amalfi was sacked by the Republic of Pisa in 1137. Since then the Amalfi coast has experienced a crisis.[2] But after the unification of Italy the Amalfi coast has enjoyed a huge economic revival, prompted even by the international tourism.[3] In 1997, the Amalfi Coast was listed as a UNESCO World Heritage Site as a cultural landscape.[4] Overview[edit] Amalfi. Amalfi is a town and comune in the province of Salerno, in the region of Campania, Italy, on the Gulf of Salerno. 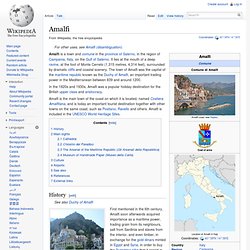 It lies at the mouth of a deep ravine, at the foot of Monte Cerreto (1,315 metres, 4,314 feet), surrounded by dramatic cliffs and coastal scenery. The town of Amalfi was the capital of the maritime republic known as the Duchy of Amalfi, an important trading power in the Mediterranean between 839 and around 1200. In the 1920s and 1930s, Amalfi was a popular holiday destination for the British upper class and aristocracy. Amalfi is the main town of the coast on which it is located, named Costiera Amalfitana, and is today an important tourist destination together with other towns on the same coast, such as Positano, Ravello and others. Positano. Positano is a village and comune on the Amalfi Coast (Costiera Amalfitana), in Campania, Italy, mainly in an enclave in the hills leading down to the coast. 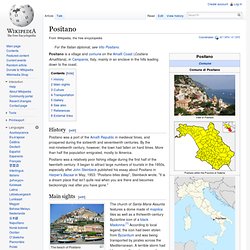