School Districts Are Standing In The Way Of Public School Edtech. No gymnasiums, no cafeterias and no administrators. 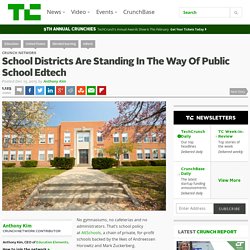 That’s school policy at AltSchools, a chain of private, for-profit schools backed by the likes of Andreessen Horowitz and Mark Zuckerberg. At the location I visited, the school schedule was written on a white board and could be changed in real time. Students flowed between grade levels and classes based upon what they wanted and needed from teachers. To me, it seemed a bit like a 21st-century version of a one-room frontier schoolhouse. But no matter — AltSchools “has been anointed by the top minds in Silicon Valley as the best hope for the future of education,” according to WIRED. The reason why is AltSchools’ use of technology. My visit got me thinking — how would one of our school districts, which might contain 100,000 or more students, implement AltSchools’ model? Based on my experience, the biggest barrier to rolling out an AltSchools model more broadly would probably be the district itself. Tailor-Made For The Factory Floor. 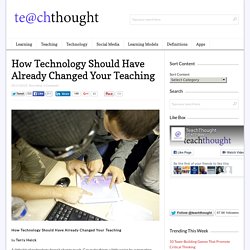 Can make things a little easier by automating them. It could make a lesson here or there gee-wiz flashy, or even engage hesitant students. Tacked-on learning technology can do this. List of Exemplar Schools. The 21st Century Learning Exemplar Program identifies what 21st century educational practices look like and where they are being implemented, providing educators and communities with a variety of models to replicate, and offering policymakers and P21 State Partners local examples to help encourage their support. 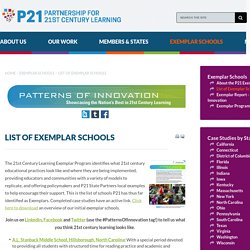 This is the list of schools P21 has thus far identified as Exemplars. Completed case studies have an active link. Click here to download an overview of our initial exemplar schools. Wheeling High School: A P21 21st Century Learning Exemplar. Spirit Lake High School: A P21 21st Century Learning Exemplar. Not Old School: Architecture in Support of Learning. 5 Big Ways Education Will Change By 2020. We asked the world’s most innovative companies in education to school us on the future of the classroom, with predictions for the next five years. 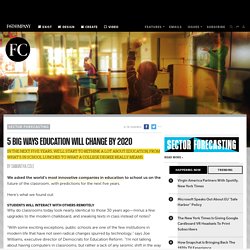 Here's what we found out: Students Will Interact With Others Remotely Why do classrooms today look nearly identical to those 30 years ago—minus a few upgrades to the modern chalkboard, and sneaking texts in class instead of notes? "With some exciting exceptions, public schools are one of the few institutions in modern life that have not seen radical changes spurred by technology," says Joe Williams, executive director of Democrats for Education Reform. 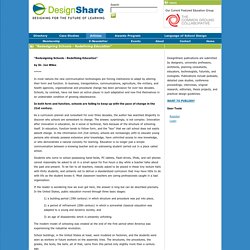 Jon Wiles In most nations the new communication technologies are forcing institutions to adapt by altering their form and function. In business, transportation, communications, agriculture, the military, and health agencies, organizational and procedural change has been pervasive for over two decades. 10 Things in School That Should Be Obsolete.

Flickr: Corey Leopold By Greg Stack So much about how and where kids learn has changed over the years, but the physical structure of schools has not. 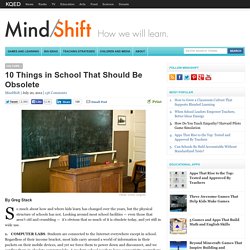 Looking around most school facilities — even those that aren’t old and crumbling — it’s obvious that so much of it is obsolete today, and yet still in wide use. 1. COMPUTER LABS. At Northern Beaches Christian School students learn everywhere. 2. 3. 4. 5. Corridors at Machias Elementary are used for informal learning 6. Modern learning environments / Technologies.

Space, whether physical or virtual, can have an impact on learning. 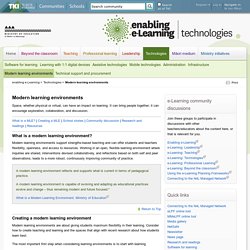 It can bring people together; it can encourage exploration, collaboration, and discussion. What is a MLE? Modern School Interior. New learning theories make their way into designing school interior and architecture. 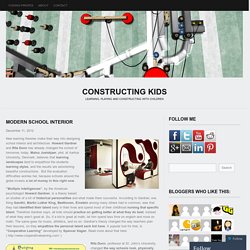 Howard Gardner and Rita Dunn has already changed the school of tomorrow, today. Malou Juelskjaer, phd. at Aarhus University, Denmark, believes that learning landscapes tend to empathize the students learning styles, and the results are astonishing beautiful constructions. But the evaluation difficulties worries her, because schools around the globe invests a lot of money in this right now. “Multiple intelligences”, by the American psychologist Howard Gardner, is a theory based on studies of a lot of historical personalities and what made them succesful.

According to Gardner, one thing Gandhi, Martin Luther King, Beethoven, Einstein among many others had in common, was that they had identified their talent early in their lives and spend most of their childhood nursing that specific talent. Rita Dunn, professor at St. What Would Be a Radically Different Vision of School? There’s no shortage of different opinions about how the education system should adapt to a shifting world and a future with unknown demands, but for the most part, only two dominant narratives of education reform have emerged. 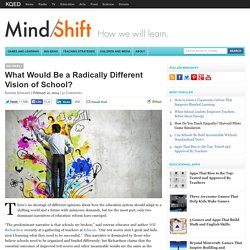 “The predominant narrative is that schools are broken,” said veteran educator and author Will Richardson recently at a gathering of teachers at Educon. “Our test scores aren’t great and kids aren’t learning what they need to be successful.” This narrative is dominated by those who believe schools need to be organized and funded differently, but Richardson claims that the essential outcomes of improved test scores and other measurable results are the same as the current system.