"Roaring deer version 2 (mating season in Poland - september).wav" by eksaa. Top 20 Best Free Music and Sound Effect Resources For. Music and sound effects are one of the most important aspects of any iOS game. 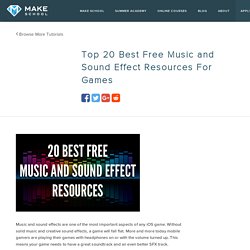 Without solid music and creative sound effects, a game will fall flat. More and more today mobile gamers are playing their games with headphones on or with the volume turned up. This means your game needs to have a great soundtrack and an even better SFX track. You don’t need to pay a fortune to get great audio in your iOS game. There are more than enough free sites out there to get music that isn’t only royalty-free, but is all around free, too! As always, make sure to read the disclaimers on all the sites listed below to see exactly how the music and sound effects can be used. Click the images to visit each site. 1. This site offers a variety of automotive sounds. Top Down Shooter: Unity tutorial series (01) How to make games fun - Unity 3D game design tutorial - Part 1 Web Design.

The Best-Looking Isometric Games. Sergiu Craitoiu's Blog - Marketing ideas for your indie game. The following blog post, unless otherwise noted, was written by a member of Gamasutra’s community. 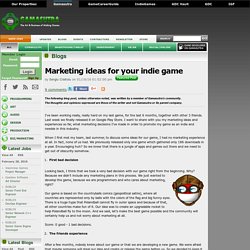 The thoughts and opinions expressed are those of the writer and not Gamasutra or its parent company. I've been working really, really hard on my last game, for the last 6 months, together with other 3 friends. Last week we finally released it on Google Play Store. I want to share with you my marketing ideas and experiences so far, what marketing decisions I’ve made in order to promote my game as an indie and newbie in this industry. When I first met my team, last summer, to discuss some ideas for our game, I had no marketing experience at all.

First bad decision Looking back, I think that we took a very bad decision with our game right from the beginning. Ed to develop the game, because we are programmers and who cares about marketing, right? Score: 0 good - 1 bad decisions. The friends experience After a few months, nobody knew about our game or that we are developing a new game. Thanks. Voxel Critter Creator. Multiplayer - GMnet ENGINE by HappyTearParakoopa. Description GMnet ENGINE (previously called HappyTear Multiplayer Engine PLUS) JOIN DEVELOPMENT: The HappyTear Multiplayer Engine allows you to create multiplayer games easier than ever before! 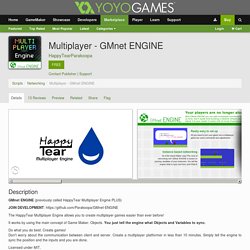 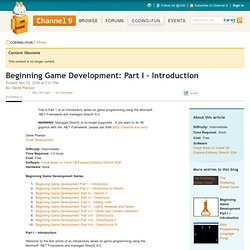 This series as aimed at beginning programmers who are interested in developing a game for their own use with the .NET Framework and DirectX. The goal of this series is to have fun creating a game and learn game development and DirectX along the way. Game programming and DirectX have their own terms and definitions that can be difficult to understand, but after awhile, you’ll crack the code and be able to explore a new world of possibilities. I will keep things as straightforward as possible and decode terms as they appear. In this series, we are going to build a simple game to illustrate the various components of a commercial game.

Tools: Before we start writing our first game we need to talk about the tools we will use. The most important tool for any developer is the Integrated Development Environment (IDE). 28 Free eBooks On Game Programming! - StumbleUpon.