5e Druid Handbook - Land & Moon. If you don’t have the stats of beasts, you can download PDFs containing them here. 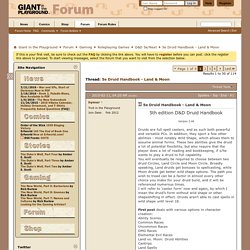 There are some goodies (such as the polar bear variant) only to be found in the MM, but all the basic stats are in the PDFs. Two things I won’t be going into here are aquatic creatures and how likely it is that you will have seen the beast I'm discussing (as that is highly campaign dependent, but still something to keep in mind). Conjure Animals has no restrictions on animals seen, but Wild Shape does. Druid dipping - an addendum. Sometimes it can be hard to tell the difference between druids and wizards. 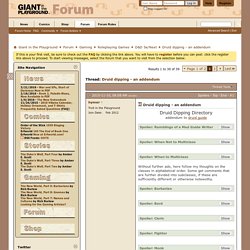 Sometimes there is a distinction with no difference. Who wants to have 13 int? Well, multiclass wizards, of course. The least visible advantage to a dip in wizard is their Ritual casting. Unlike druids, wizards need not have a spell prepared to cast it ritually; it need only be in their spellbook. A few cantrips can be welcome as well, even if you don’t have the int score to back up an offensive one. So wiz1 is not a very painful dip, and it comes with some compensation. Abjuration: Gives you bonus hit points from casting abjuration spells.

Bladesinging (SCAG): If you happen to have a very high Int from rolling stats, this could be an option for moon druids. Conjuration: Minor conjuration lets you make small, obviously magical objects. Divination: Portent gives you control of the world's chaos. Enchantment: Hypnotic Gaze can let you pretty much pacify one adjacent foe if you have the int to back it up. Magical Items for Druids - a commentary for players and DMs of druids. Amulet of Health (rar, att): You’re not likely to be the one to gain the most from setting your con to 19. 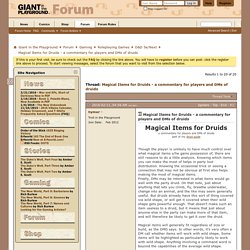 Your wild shapes are likely to have better con than your caster form, as well. But you do use a lot of Concentration spells. Animated Shield (vra, att): While technically able to help the AC of wild shapes (by activating it while in caster form and then shifting to wild shape), the 1-minute duration and possibly the bonus action activation do not work too well.

An elven druid could probably use it with their racial ranged weapon before this gets overtaken by cantrips in efficiency. Armor (rar-leg): Protecting your caster form is of course always attractive, and it’s likely that an armour type you’d be interested in (studded leather, hide, or spiked armour from SCAG) is less sought after by the rest of the party. Arrow-Catching Shield (rar, att): Better than a non-magical shield, but may not be better than a +1 shield. Pearl of Power (unc, att): A boost to spells per day. The Forgotten Realms Wiki - Books, races, classes, and more. Living Greyhawk Column: Power Groups - Druids of the Old Faith. The sun rises and the sun sets, the two moons dance across the heavens, and the seasons pass. 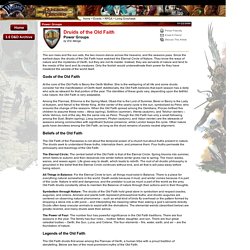 Since the earliest days, the druids of the Old Faith have watched the Eternal Circle of Nature. They know the ways of nature and the mysteries of Oerth, but they are not its master. Instead, they are servants of nature and tend to the needs of the land and its creatures. Only the foolish would underestimate their power for they have mastered the secrets of the world itself. Iliel by Tira-Owl on DeviantArt. Moon elf by Tira-Owl on DeviantArt. Lady of the Lake. Lady of the Lake is the titular name of the ruler of Avalon in the Arthurian legend. 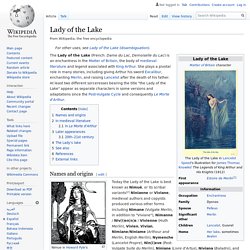 She plays a pivotal role in many stories, including giving King Arthur his sword Excalibur, enchanting Merlin, and raising Lancelot after the death of his father. Different writers and copyists give the Arthurian character the name Nimue, Viviane, Vivien, Elaine, Ninianne, Nivian, Nyneve, or Evienne, among other variations.[1] In medieval literature[edit] Rhiannon. Rhiannon is a major and classic figure in the earliest prose literature and mythology of Britain, the Mabinogi. 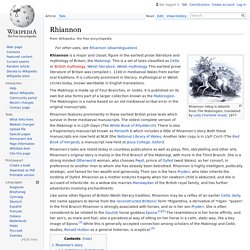 This is a set of tales classified as Celtic or British mythology, Welsh literature, Welsh mythology. This earliest prose literature of Britain was compiled c. 1100 in mediaeval Wales from earlier oral traditions. It is culturally prominent in literary, mythological or Welsh circles today, known worldwide in English translations.

The Mabinogi is made up of Four Branches, or nodes. It is published on its own but also forms part of a larger collection known as the Mabinogion. Elf druid by Tira-Owl on DeviantArt. Into Battle by WindoftheStars on DeviantArt. Reaper Miniatures. 60064: Nature Warden ($5.99)Patrick Keith Released on 02-28-11. 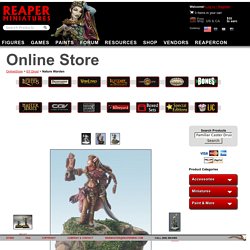 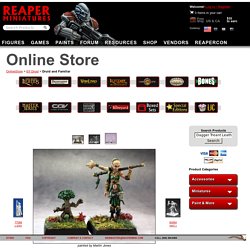 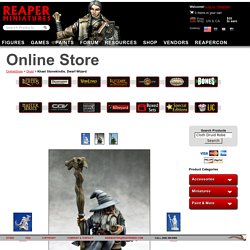