George Lakoff: 'Conservatives don't follow the polls, they want to change them … Liberals do everything wrong' "The progressive mindset is screwing up the world. 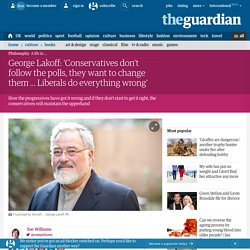 If we accept Lakoff's conclusion, what would it mean to accept his prescription? Freud’s Life and Legacy, in a Comic. By Maria Popova “You have to listen carefully. 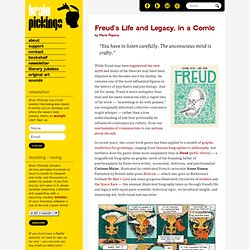 The unconscious mind is crafty.” While Freud may have engineered his own myth and many of his theories may have been disputed in the decades since his heyday, he remains one of the most influential figures in the history of psychiatry and psychology. And yet for many, Freud is more metaphor than man and his name summons only a vague idea of his work — “something to do with penises,” our marginally informed collective conscience might whisper — rather than a true understanding of just how profoundly he influenced contemporary culture, from our mechanisms of consumerism to our notions about the self. From how his own childhood informed his ideas to his most famous cases, the captivating story weaves its way through Freud’s life to shed light on both the man and his metaphors for the mind. Freud is absolutely fantastic from cover to cover. Images courtesy of Nobrow Donating = Loving Brain Pickings has a free weekly newsletter. Share on Tumblr. The Hidden Brain: How Ocean Currents Explain Our Unconscious Social Biases.

By Maria Popova “Those who travel with the current will always feel they are good swimmers; those who swim against the current may never realize they are better swimmers than they imagine.” 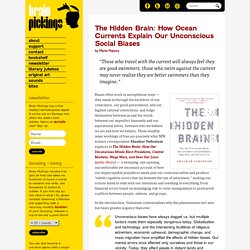 Biases often work in surreptitious ways — they sneak in through the backdoor of our conscience, our good-personhood, and our highest rational convictions, and lodge themselves between us and the world, between our imperfect humanity and our aspirational selves, between who we believe we are and how we behave. In the introduction, Vedantam contextualizes why this phenomenon isn’t new but bears greater urgency than ever: Unconscious biases have always dogged us, but multiple factors made them especially dangerous today.

Globalization and technology, and the intersecting faultlines of religious extremism, economic upheaval, demographic change, and mass migration have amplified the effects of hidden biases. Illustration from the 1970 book 'I’m Glad I’m a Boy! Vedantam writes: Donating = Loving Share on Tumblr. The Science of Dreams and Why We Have Nightmares. By Maria Popova The psychology of our built-in nocturnal therapy. “The interpretation of dreams is the royal road to a knowledge of the unconscious activities of the mind,” Freud argued in his influential treatise The Interpretation of Dreams in 1900.

“The earth is heavy and opaque without dreams,” Anaïs Nin wrote in her diary in 1940. “In the olden days, people believed that our dreams were full of clues about the future,” Alain de Botton told a little kid who wanted to know about dreaming. But what, exactly, are dreams and why do we have them? In Dreamland: Adventures in the Strange Science of Sleep (public library) — best science books of 2012, exploring what happens while you sleep and how it affects your every waking moment, which also gave us this fascinating reads on sleep and the teenage brain — David K. By the time [Hall] died in 1985, Hall had synopses of more than fifty thousand dreams from people of all age groups and nationalities.

And yet theories continue to differ. Our brains: predictably irrational. Dan Ariely: Are we in control of our own decisions? The Psychological Mistakes People Make That Lead to Misery. Photo Credit: Wikimedia Commons/New York World-Telegram and the Sun Newspaper staff photographer February 18, 2014 | Like this article? 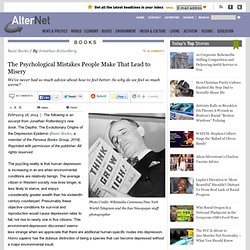 Join our email list: Stay up to date with the latest headlines via email. The following is an excerpt from Jonathan Rottenberg's new book, The Depths: The Evolutionary Origins of the Depression Epidemic (Basic Books, a member of the Perseus Books Group, 2014). The puzzling reality is that human depression is increasing in an era when environmental conditions are relatively benign. There is no scientific consensus about why human depression rates are rising in the industrialized world, but several compelling possibilities exist. Humans have a host of unique thoughts and reactions to low mood, many of which are highly cognitive.

Sinking Through Thinking A hallmark human response to low mood is to try to explain it—as we do with moods generally. However, exactly what “analyze more carefully” means depends on which species is doing the analyzing.