Adjunct Action. Congress Wants to Know: What's It Like to Be an Adjunct? 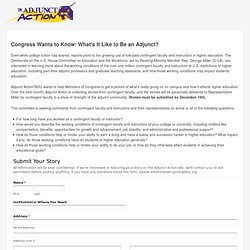 Even while college tuition has soared, reports point to the growing use of low-paid contingent faculty and instructors in higher education. The Democrats on the U.S. House Committee on Education and the Workforce, led by Ranking Minority Member Rep. George Miller (D-CA), are interested in learning more about the working conditions of the over one million contingent faculty and instructors at U.S. institutions of higher education, including part-time adjunct professors and graduate teaching assistants, and how those working conditions may impact students’ education.

Adjunct Action/SEIU wants to help Members of Congress to get a picture of what's really going on on campus and how it affects higher education. The committee is seeking comments from contingent faculty and instructors and their representatives on some or all of the following questions: For how long have you worked as a contingent faculty or instructor? Higher Education’s Hierarchy (simplified with cats) Campus Equity Week — Follow Campus Equity Week @Tumblr via @NetWorkedBlogs. Students help adjunct faculty in fight to form unions. Students walking near the library quad at Northeastern University last Thursday came face-to-face with an unusual form of student activism: a flash mob. 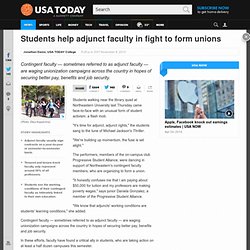 "It's time for adjunct, adjunct rights," the students sang to the tune of Michael Jackson's Thriller. "We're building up momentum, the fuse is set alight. " The performers, members of the on-campus club Progressive Student Alliance, were dancing in support of Northeastern's contingent faculty members, who are organizing to form a union. "It honestly confuses me that I am paying about $50,000 for tuition and my professors are making poverty wages," says junior Daniela Gonzalez, a member of the Progressive Student Alliance.

"We know that adjuncts' working conditions are students' learning conditions," she added. Contingent faculty — sometimes referred to as adjunct faculty — are waging unionization campaigns across the country in hopes of securing better pay, benefits and job security. Academia's indentured servants - Opinion. On April 8, 2013, the New York Times reported that 76 percent of American university faculty are adjunct professors - an all-time high. 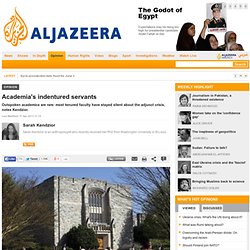 Unlike tenured faculty, whose annual salaries can top $160,000, adjunct professors make an average of $2,700 per course and receive no health care or other benefits. Most adjuncts teach at multiple universities while still not making enough to stay above the poverty line. Some are on welfare or homeless. Others depend on charity drives held by their peers. Adjuncts are generally not allowed to have offices or participate in faculty meetings.

No one forces a scholar to work as an adjunct. "Path dependence and sunk costs must be powerful forces," speculates political scientist Steve Saidemen in a post titled "The Adjunct Mystery". With roughly 40 percent of academic positions eliminated since the 2008 crash, most adjuncts will not find a tenure-track job. Contingency has become permanent, a rite of passage to nowhere. A two-fold crisis. New York Contingency Plan: Outsourcing Education - Village Voice. Karen Gregory is still puzzled by the events of "the day the syllabus went crazy," as she calls it. 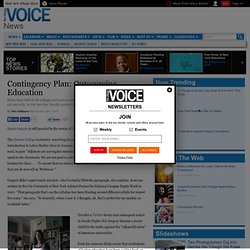 The Queens College instructor, searching for something to spark discussion on the first day of her Introduction to Labor Studies class in January, settled on adding a statement to her syllabus. It read, in part: "Adjuncts are not regular members of the faculty; we are paid an hourly rate for time spent in the classroom. We are not paid to advise students, grade papers, or prepare materials or lectures for class. . . . To ensure that we remain conscious of the adjunctification of CUNY, we ask that you do not call us 'Professor.'" Gregory didn't expect much reaction—she'd actually lifted the paragraph, she explains, from one written by the City University of New York Adjunct Project for National Campus Equity Week in 2007. 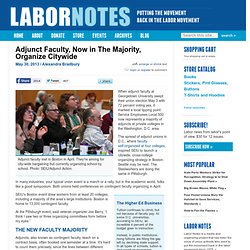 The spread of adjunct unions in D.C., where faculty self-organized at four colleges, inspired SEIU to launch a citywide, cross-college organizing strategy in Boston. Seattle may be next. The Steelworkers are doing the same in Pittsburgh. In many industries, your typical union event is a march or a rally, but in the academic world, folks like a good symposium. Both unions held conferences on contingent faculty organizing in April. The Higher Ed Business Tuition continues to climb, but not because of faculty pay. Instead, in public institutions, rising tuitions are filling the gap left by declining state support.

The typical teacher is a female adjunct in a community college, Berry said.