Timeline. Because there are so many details to the styling, this is not exactly simple, but, if you have some technical capacity, you can override TimelineJS's CSS rules and have complete control over the look of the timeline. 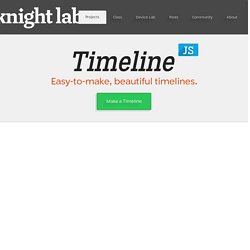 For details, see Using the TimelineJS CSS selectors. You will need to be able to instantiate the Timeline in javascript on your own page. (There is no way to override the CSS using the iframe embed.) Then, either in <style> tags in that page, or in an external stylesheet, you can specify CSS rules changing some or all of TimelineJS's default presentation. Emmeline Pankhurst. Emmeline Pankhurst, the eldest daughter of ten children of Robert Goulden and Sophia Crane Gouldon, was born in Manchester on 15th July, 1858. 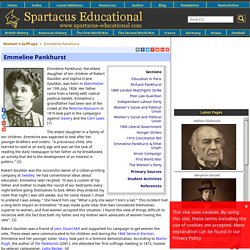 Her father came from a family with radical political beliefs. Emmeline's grandfather had been one of the crowd at the Peterloo Massacre in 1819 took part in the campaigns against slavery and the Corn Laws. (1) The eldest daughter in a family of ten children, Emmeline was expected to look after her younger brothers and sisters. "A precocious child, she learned to read at an early age and was set the task of reading the daily newspaper to her father as he breakfasted, an activity that led to the development of an interest in politics. " (2) Robert Gouldon was the successful owner of a cotton-printing company at Seedley. Robert Goulden was a friend of John Stuart Mill and supported his campaign to get women the vote. After a short spell at a local school, Emmeline was sent to École Normale Supérieure, a finishing school in Paris in 1873.

Emmeline Pankhurst - Wikipedia. Born in Moss Side, Manchester to politically active parents, Pankhurst was introduced at the age of 14 to the women's suffrage movement. 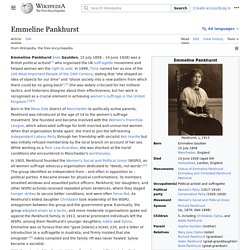 On 18 December 1879, she married Richard Pankhurst, a barrister 24 years older than her known for supporting women's right to vote; they had five children over the next ten years. He supported her activities outside the home, and she founded and became involved with the Women's Franchise League, which advocated suffrage for both married and unmarried women. When that organisation broke apart, she tried to join the left-leaning Independent Labour Party through her friendship with socialist Keir Hardie but was initially refused membership by the local branch on account of her gender. While working as a Poor Law Guardian, she was shocked at the harsh conditions she encountered in Manchester's workhouses. 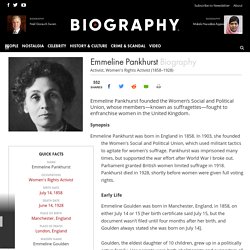 In 1903, she founded the Women's Social and Political Union, which used militant tactics to agitate for women's suffrage. Pankhurst was imprisoned many times, but supported the war effort after World War I broke out. Parliament granted British women limited suffrage in 1918. Pankhurst died in 1928, shortly before women were given full voting rights. Early Life Emmeline Goulden was born in Manchester, England, in 1858, on either July 14 or 15 [her birth certificate said July 15, but the document wasn’t filed until four months after her birth, and Goulden always stated she was born on July 14]. Goulden, the eldest daughter of 10 children, grew up in a politically active family.

Marriage and Political Activism. History - Emmeline Pankhurst. Suffragette: Cinema Screenings & Ticket Booking - The Official Showtimes Destination. Suffragette Webpicks – Speakeasy News. The film Suffragette is an excellent occasion to talk about the movement for votes for women in the UK in the 19th and 20th centuries. 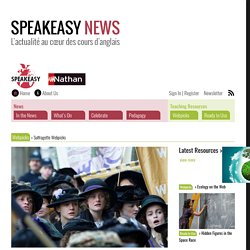 As well as the trailer, below, the site for the Suffragette film has a clip called “We will win”, which would work well in class. There is also a gallery of inspiring women that you can upload examples to. Why not ask your pupils to choose an inspiring woman and upload an image and a short description? There is an B1 audio interview with interactive comprehension activities about Suffragettes in the Banque de ressources anglais cycle 4:Audios > B1 > École et société > Interviews > Votes for Women To see the resource, register now or log in.