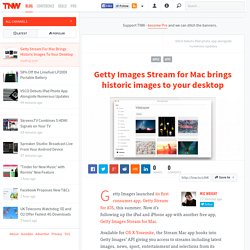 Now it’s following up the iPad and iPhone app with another free app, Getty Images Stream for Mac. Available for OS X Yosemite, the Stream Mac app hooks into Getty Images’ API giving you access to streams including latest images, news, sport, entertainment and selections from its archive. You can select images from the Getty Stream and turn them into a desktop wallpaper for your Mac or stream slideshows via AirPlay to your iPad, iPhone or Apple TV. The app also gives you the option to legally share an image directly to Facebook and Twitter or embed them on a blog or webpage.

Getty says embedded images have surpassed one billion impressions since it launched the feature in March 2014. ➤ Getty Stream [Mac App Store] Techable(テッカブル)-海外のネットベンチャー系ニュースサイト. Video Blog - Web Video News. Info Back in the day, if you had a business idea and needed to fund it, your bank manager became your best friend. 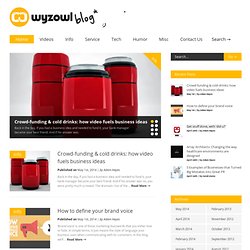 And if his answer was Info ‘Brand voice’ is one of those marketing buzzwords that you either love or hate. In simple terms, it just means the style of language your Videos We all have so much to do these days that ‘To Do…’ lists can be a great help. But the whole thing can just be Videos It might not be something that the lay person thinks about all too often, but next time you’re in a doctors practice or hospital, take Info We’ve all heard the saying ‘there’s no such thing as bad PR’ but how far would you go to get publicity? When mistakes are made Videos Whether it’s letterheads, business cards, flyers, banners or direct mailings, most businesses spend a fair amount of money on printing. It’s an essential part of Videos It’s a familiar scenario we all face at one time or another.

Call-centre managers have a really tough job on their hands. Info. Drawings - A Freehand Drawing Search Engine. A New App That Lets You Take Apart Websites and Rebuild Them At Will. You used to have to be a programmer just to use computers at all. 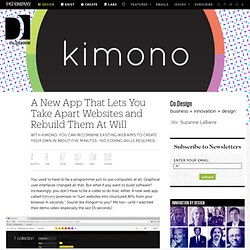 Graphical user interfaces changed all that. But what if you want to build software? Increasingly, you don't have to be a coder to do that, either. A new web app called Kimono promises to "turn websites into structured APIs from your browser in seconds. " Sound like Klingon to you? In nontechnical terms, Kimono lets you snap off pieces of existing websites, throw them into a bucket, and recombine them at your pleasure. Grabbing these two pieces of information from the web and displaying them together seemed simple enough. Yes, it's super primitive: partly because Kimono's app builder isn't fully featured yet, and partly because I still don't really know what I'm doing. "We asked ourselves, if getting access to structured data from around the web is so interesting to us, why wouldn't it be interesting to everyone else, even people who can't code?

" Rowe and Ranade designed Kimono to be both unobtrusive and visually direct. Automator for Mac OS X: Tutorial and Examples. If you're new here, you may want to subscribe to my RSS feed or follow me on Twitter. 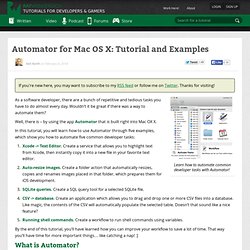 Thanks for visiting! Learn how to automate common developer tasks with Automator! As a software developer, there are a bunch of repetitive and tedious tasks you have to do almost every day. Wouldn’t it be great if there was a way to automate them? Well, there is – by using the app Automator that is built right into Mac OX X. In this tutorial, you will learn how to use Automator through five examples, which show you how to automate five common developer tasks: Xcode -> Text Editor.

Welcome to Explorations in Science with Dr. Michio Kaku. 楽しいBADUIの世界. Machu Picchu - 16 Gigapixels. Shortcat - Keyboard productivity app for Mac OS X. 17 Designers you Should Know and their Workspaces. Here at WDL we like to keep you posted on everything about Web Design, creativity and inspiration. 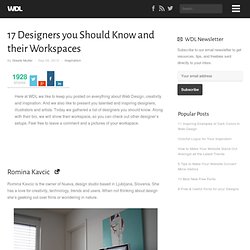 And we also like to present you talented and inspiring designers, illustrators and artists. Today we gathered a list of designers you should know. Along with their bio, we will show their workspace, so you can check out other designer’s setups. Feel free to leave a comment and a pictures of your workspace. Romina Kavcic Romina Kavcic is the owner of Nueva, design studio based in Ljubljana, Slovenia. Megan Robichaud Megan is a graphic designer and illustrator from [Hampton] New Brunswick, Canada, currently living in the beautiful city of Vancouver. Caitlin McEvoy Taking particular interest in hand-drawn lettering and typographic illustration, Caitlin McEvoy is a graphic design enthusiast of many years.