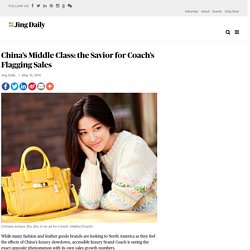 KORS in China: "Expensive but not too expensive" hits the sweet spot for sales — Quartz. Michael Kors is in good spirits. 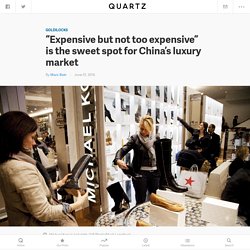 The seller of relatively affordable luxury clothes and handbags reported today (June 1) that its total sales for the year rose 7.8% to $4.7 billion. Long a mall and department store staple, the brand is thriving even as those US retail institutions suffer. John Idol, the brand’s CEO, noted two important new strategies on a call with analysts this morning: One is that Michael Kors is deliberately pulling back on its wholesale business to department stores. The other is that it’s ramping up its business in Asia, especially in China. As far apart as those two moves may seem, they aren’t unrelated. 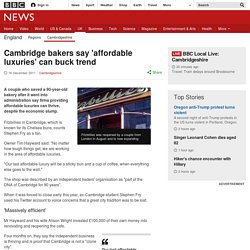 Fitzbillies in Cambridge, which is known for its Chelsea buns, counts Stephen Fry as a fan. Owner Tim Hayward said: "No matter how tough things get, we are working in the area of affordable luxuries. "Our last affordable luxury will be a sticky bun and a cup of coffee, when everything else goes to the wall. " The shop was described by an independent traders' organisation as "part of the DNA of Cambridge for 90 years". When it was forced to close early this year, ex-Cambridge student Stephen Fry used his Twitter account to voice concerns that a great city tradition was to be lost. Mr Hayward and his wife Alison Wright invested £100,000 of their own money into renovating and reopening the cafe. Well off is the new poor. The pressure to emulate the lifestyles of the super-rich has left Britain's middle classes suffering from 'luxury fever', according to a new study. 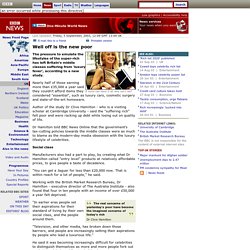 Nearly half of those earning more than £35,000 a year said they couldn't afford items they considered "essential", such as luxury cars, cosmetic surgery and state-of-the-art homeware. Author of the study Dr Clive Hamilton - who is a visiting scholar at Cambridge University - said the "suffering rich" felt poor and were racking up debt while losing out on quality of life. Dr Hamilton told BBC News Online that the government's tax-cutting policies towards the middle classes were as much to blame as the modern-day media obsession with the luxury lifestyle of celebrities. 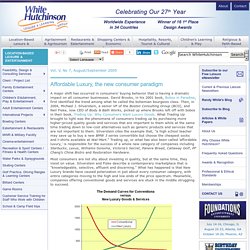 David Brooks, in his 2001 book, Bobos in Paradise, first identified the trend among what he called the bohemian bourgeois class. Then, in 2004, Michael J. Silverstein, a senior VP of the Boston Consulting Group (BCG), and Neil Fiske, now CEO of Body & Bath Works, picked up where Brooks left off with bobos in their book, Trading Up: Why Consumers Want Luxury Goods. Mulberry's return to affordable luxury. Fashion Accessories - UK - January 2016. Brand rethink. Consumer products executives are confronting a bitter truth: conventional recipes traditionally used for profitable growth no longer are enough. 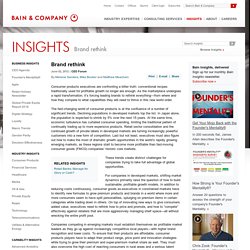 As the marketplace undergoes a rapid transformation, it’s forcing leading brands to rethink everything—from where and how they compete to what capabilities they will need to thrive in this new world order. The fast-changing world of consumer products is at the confluence of a number of significant trends. Declining populations in developed markets top the list.

In Japan alone, the population is expected to shrink by 5% over the next 15 years. At the same time, economic turbulence has curtailed consumer spending, limiting the traditional pattern of continually trading up to more expensive products. These trends create distinct challenges for companies trying to take full advantage of global opportunities. Masstige 我的平民时尚！-搜狐女人. Five Different Types of Luxury Brands - Agence LuxuryAgence Luxury. 一秒钟变绅士淑女！那些好用不贵的轻奢侈品(组图)-搜狐滚动. 轻奢品牌有哪些_百度知道. Top 5: Accessible American Luxury Brands. On Friday and Monday, WikiLeaks published more than 30,000 emails revealing the inner machinations of Hillary Clinton’s presidential campaign, especially as she sought to outmaneuver Bernie Sanders on trade and Wall Street during the contentious primary. 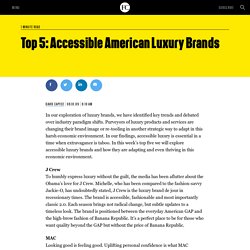 The bombshell recording of Donald Trump's hot-mic comments on his desire to "f—k" a married woman and grope women overshadowed the leak initially. And questions have been raised by some, including Newsweek's Kurt Eichenwald, about whether the emails were subsequently falsified by the Russian government to influence the U.S. election. Clinton spokesperson Brian Fallon took a dig at the media's interest in the trove and suspicion that Russia was behind the hack by tweeting on Friday: "Striking how quickly concern abt Russia's masterminding of illegal hacks gave way to digging thru fruits of hack. Just like Russia wanted. " Here are some of the biggest revelations in the emails: How luxury brands try to straddle the accessible-exclusive divide. There’s a fine line for luxury brands balancing a tradeoff between the accessibility of digital and the exclusivity of something that’s meant to be special. 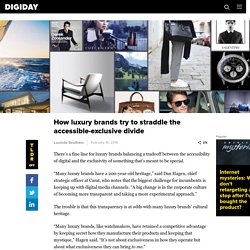 “Many luxury brands have a 200-year-old heritage,” said Dan Hagen, chief strategic officer at Carat, who notes that the biggest challenge for incumbents is keeping up with digital media channels. “A big change is in the corporate culture of becoming more transparent and taking a more experimental approach.” The trouble is that this transparency is at odds with many luxury brands’ cultural heritage. 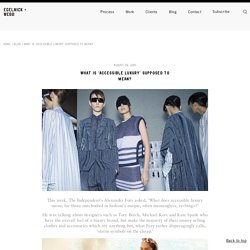 He was talking about designers such as Tory Burch, Michael Kors and Kate Spade who have the overall feel of a luxury brand, but make the majority of their money selling clothes and accessories which are anything but, what Fury rather disparagingly calls, ‘status symbols on the cheap.’ There is, of course, nothing wrong with this. Fashion and luxury brands have always made the majority of their money sticking logos onto quite ordinary lipsticks, perfumes and accessories. It’s the egregious use of a once perfectly good word, in this case, ‘luxury’ that rankles. Bridge brands challenge high-end fashion. "Men always take the best they can get" Samuel Johnson For some time now, luxury brands have struggled to maintain their elite status, which is no easy feat, especially in the current economic landscape. 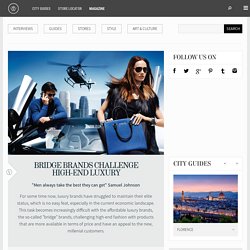 This task becomes increasingly difficult with the affordable luxury brands, the so-called "bridge" brands, challenging high-end fashion with products that are more available in terms of price and have an appeal to the new, millenial customers. If the political system caught the democratization bug fairly early, the luxury paradigm has been highly discriminatory until fairly recently, steadily relying on the elite to constitute the bulk of its consumers.

Nowadays, it looks like things are changing and the post-industrial economies are conditioning the democratization of high-end consumption, broadening the scope of their clientele and appealing to the younger, millennial consumer. Satus symbol vs. New retail models for the new consumer. Affordable luxury brands are booming in popularity - latimes. Bets on the top-performing retailer this holiday don't favor the storied haute couture companies — not Chanel with its $4,500 handbags, nor Neiman Marcus and its $150,000 bespoke falconry set. Instead, it's Michael Kors Holdings — an American sportswear brand from a sassy former "Project Runway" judge — that's roundly predicted to crush Christmas. The company is what's known as a bridge brand, operating on the low end of luxury. Its handbags generally cost less than $500. Affordable Luxury: The New Fashion Jewellery.

On the trend: when women are looking for quality and affordable luxury fashions, ABS by Allen Schwartz is their one-stop shop. LUXE LIFE: IT MAY BE CALLED ACCESSIBLE LUXURY, BUT TO SHOPPERS CHECKING OUT NEIGHBORING COACH AND COLE HAAN STORES IN MANHATTAN LAST WEEK, THE REALITY IS STILL PRETTY EXPENSIVE. THE NEW LUXURY CRAZE: AS CONSUMERS CONTINUE TO SEEK TRENDY, HIGH-QUALITY FOOTWEAR AT COMPETITIVE PRICES, A GROWING NUMBER OF FOOTWEAR BRANDS ARE CASHING IN ON A BURGEONING SEGMENT OF THE HIGH-END MARKET KNOWN AS ACCESSIBLE-LUXURY. THE PRICE IS RIGHT: WHAT MAY SEEM LIKE AN EASY FORMULA IS ACTUALLY A TOUGH EQUATION FOR BRANDS LOOKING TO TAP INTO THE NEW ACCESSIBLE-LUXURY MOVEMENT. Image of Luxury Brands. THE NEW LINE. Affordable luxury brands are booming in popularity - latimes. Coach: How One Brand is Navigating the Affordable Luxury Paradox. Over the past 10 years, rapidly changing conditions in the luxury market have been leaving more room for younger, more accessible brands.

Coach and its direct competitors like Michael Kors and Kate Spade have jumped at the opportunity and taken advantage of a growing market for quality, yet affordable leather goods. These brands have chosen to walk a fine line between a desire to be exclusive – and covet the “True Luxury” label – and a desire to reach out and attract new customers with more accessible products. But is the siren song of the ‘affordable luxury’ market a trap? Suffice it to say that it’s both a paradox and a risk that brands like Coach have chosen to take. In fact, once upon a time, Coach was a trailblazer in this arena. Why COACH, Michael Kors, Apple, GM And New Balance Are Succeeding In China. Photo: Hong Wu/Getty Images for Michael Kors COACH COH +0.47%, Michael Kors, Apple AAPL +1.75% and New Balance, as well as brands like GM and Rebecca Minkoff are all succeeding in China and with the Chinese Global Consumer Demographic. Why them and not others?

Accessible luxury snaps at heels of mega brands. What is Accessible Luxury? Manufacture Calibers are a Luxury Differentiator By definition accessible luxury refers to items of luxury which are available at an accessible price, however to some the idea of accessibility seems alien when the subject of luxury is discussed. Take for example the undiscerning buyer who might have the financial wherewithal to purchase an expensive product without understanding the finer details about its intrinsic qualities. "Accessible Luxury" Is The Best Thing In Fashion Right Now Even If It Really Doesn't Make Sense.

Once the darlings of Wall Street, in the last year these accessible luxury brands have run into trouble, with some reporting weak earnings and declining same-store sales. Last Tuesday morning, Coach reported fourth quarter revenues of $1 billion, a 12 percent drop compared to the same period last year. While the American leather goods and accessories maker’s revenues beat expectations, same-store sales fell by 19 percent. Then, on Wednesday, Kate Spade & Co. reported second quarter net income of $8.5 million, after reporting a loss in the same period a year earlier.

Kate Spade shares have dropped 35 percent in value since the beginning of 2015. Accessible luxury: Brands may be devaluing 'luxury' – but they’re making a mint.