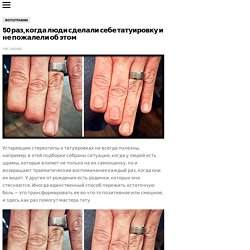 5 Quotes To Inspire A Life Without Regrets. Sorry this article is not available in your chosen language. 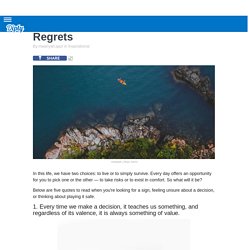 Unsplash | Dean Johns In this life, we have two choices: to live or to simply survive. Every day offers an opportunity for you to pick one or the other — to take risks or to exist in comfort. So what will it be? Below are five quotes to read when you're looking for a sign, feeling unsure about a decision, or thinking about playing it safe. 1. You will never look at a fish in the... - Best Video You Will Ever See. Бабушки жгут! Конкурс красоты «Кому за 50» шокировал мир. Какие ассоциации у вас вызывают слова «конкурс красоты»? 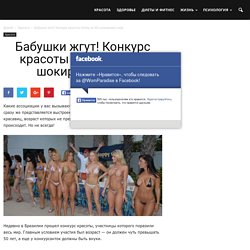 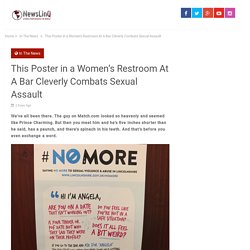 The guy on Match.com looked so heavenly and seemed like Prince Charming. She Tells Her Grandma That She’s Just Been Cheated On So Grandma Tells Her To Do This. This is a good lesson for all of us, no matter what stage of life you’re in. 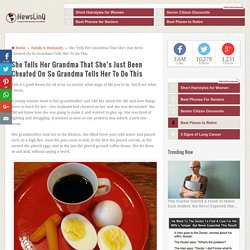 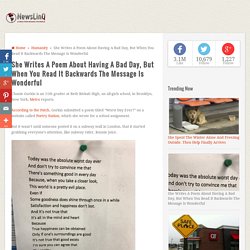 According to the Patch, Gorkin submitted a poem titled “Worst Day Ever?” On a website called Poetry Nation, which she wrote for a school assignment. But it wasn’t until someone posted it on a subway wall in London, that it started grabbing everyone’s attention, like subway rider, Ronnie Joice. 9 Women Managed To Keep A Secret From Their Husbands For 30 Years. This Is Unreal...

Somewhere in West Tennessee, not far from Graceland, nine women – or “The 9 Nanas,” as they prefer to be called – gather in the darkness of night. 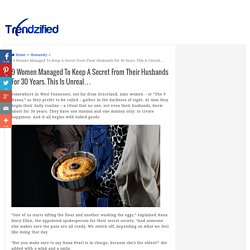 At 4am they begin their daily routine – a ritual that no one, not even their husbands, knew about for 30 years. They have one mission and one mission only: to create happiness. And it all begins with baked goods. “One of us starts sifting the flour and another washing the eggs,” explained Nana Mary Ellen, the appointed spokesperson for their secret society. “And someone else makes sure the pans are all ready. He Overheard This Father Saying This Very Strange Thing At The Airport To His Daughter. Recently I overheard a Father and daughter in their last moments together at the airport. 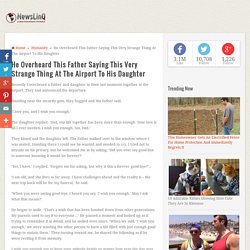 They had announced the departure. Standing near the security gate, they hugged and the Father said, ‘I love you, and I wish you enough.’ The daughter replied, ‘Dad, our life together has been more than enough. Your love is all I ever needed. They kissed and the daughter left. ‘Yes, I have,’ I replied. ‘I am old, and she lives so far away. 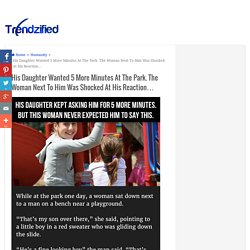 The Woman Next To Him Was Shocked At His Reaction… Source. Mother Is Shocked When Her Fatherless Daughter Does This On Daddy’s Day. Queerty. She's 86 Years Old And She's About To Put You And Your Excuses For Not Exercising To Shame. They Put A Dog Inside His Jail Cell And Start Filming. Watch What The Inmate Does. - LittleThings.com. About Barbara DiamondSee more stories Barbara is a passionate writer and animal lover. 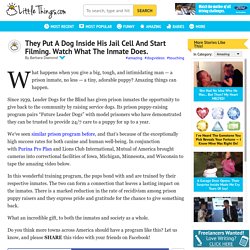 She loves her rescue dog, drinking coffee while typing away on her computer, and indulging in some shameless reality TV. What happens when you give a big, tough, and intimidating man — a prison inmate, no less — a tiny, adorable puppy? Amazing things can happen. Since 1939, Leader Dogs for the Blind has given prison inmates the opportunity to give back to the community by raising service dogs.

Глухонемой человек заплакал после всего этого. He Catches His Wife Crying While Doing Laundry. Then She Tells Him The Shocking Truth. This man follows his wife every morning without her knowing. Sounds strange doesn’t it? LOOK AT YOURSELF AFTER WATCHING THIS.mp4. This Kid Stood Up To Bullies In The Best Way Possible! Woman Uses Paramedical Tattooing To Hide Burns And Scars. Basma Hameed may not look like your typical tattoo artist, but that's because her ink-driven cause is anything but ordinary. After suffering terrible facial burns as a child, Basma devoted her life to paramedical tattooing, helping trauma victims cover up their burns and scars with skin-colored pigmentation treatments. Her profession is especially meaningful to the 17-year-old girl featured in this video, who had boiling water thrown in her face by ruthless bullies.

Faced with the possibility of lifelong scarring, she sought Basma's help. Guy with no arms plays piano and wins China's Got Talent. Young Girl With No Fingers Plays Piano Beautifully And Becomes An Inspiration To Everyone - So Amazing! You'll NEVER Guess What Her Hidden Talent Is!!! A Man Goes On ‘Shark Tank’ and Gets His Life’s Work Ripped to Shreds. Now Watch Him Turn the Tables. School Bully Asked Girl He Tormented On Date. She Left A Note. When Louisa Manning was 12 years old, she was harassed by her fellow students about her weight, her monobrow, and she was called a “manbeast.” The photo above on the left is then — the picture on the right? Coach Catches Teenage Runner With Multiple Sclerosis During Every Race. Kayla Montgomery is one of the country's best long distance runners. However, her battle with multiple sclerosis (MS) doesn't make racing easy.

Watch her remarkable display of perseverance as she fights on the track to come out on top, even if it means collapsing into her coach's arms at the finish line. Kayla's determination is nothing short of astonishing. According to the National Multiple Sclerosis Society, MS "is an unpredictable, often disabling disease of the central nervous system that disrupts the flow of information within the brain, and between the brain and body. " The NMSS lists common MS symptoms such as fatigue, gait difficulties, numbness/tingling of limbs, and muscle spasms. Given the impairments MS places on muscles and physical coordination, Kayla's running feats are truly miraculous. 35 Pictures That Prove The World Isn’t Such A Bad Place.