Mantherapy. Toxic Masculinity and the Orlando Murders. About a thousand people gathered in Grand Army Plaza in Brooklyn on Tuesday night. 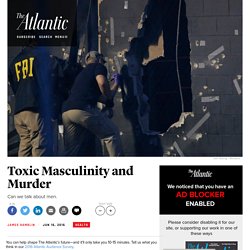 It was a candlelight vigil, the borough rallying in solidarity with the LGBT community, and against what’s at this point simply being called hate. Near the impromptu stage, hand-drawn on white poster board, a sign read “Love conquers hate.” After the deadliest mass shooting in U.S. history, in the context of several savage years—from Sandy Hook to Aurora to Santa Barbara to Orlando—the common enemy, now distilled at rallies and across social media, seems to be this emotion. Stemming the violence, then, means deconstructing hate. It means considering every element in the creation and enabling of so many psychopaths. In Salon this week, writer Amanda Marcotte argues that the “national attachment to dominance models of manhood is a major reason why we have so much violence.” 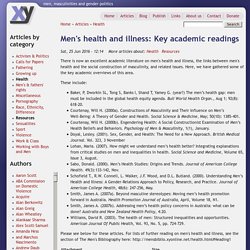 Here, we have gathered some of the key academic overviews of this area. These include: White Ribbon explains why it's not just a 'fundraising club (ABC RN) Masculinity Is Killing Men: The Roots of Men and Trauma. By Kali Holloway / alternet.org “The three most destructive words that every man receives when he’s a boy is when he’s told to 'be a man,'” —Joe Ehrmann, coach and former NFL player If we are honest with ourselves, we have long known that masculinity kills men, in ways both myriad and measurable. 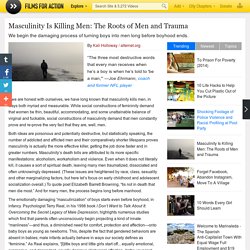 While social constructions of femininity demand that women be thin, beautiful, accommodating, and some unattainable balance of virginal and fuckable, social constructions of masculinity demand that men constantly prove and re-prove the very fact that they are, well, men. Both ideas are poisonous and potentially destructive, but statistically speaking, the number of addicted and afflicted men and their comparatively shorter lifespans proves masculinity is actually the more effective killer, getting the job done faster and in greater numbers. It's time to do away with the concept of 'manhood' altogether. 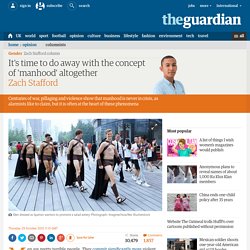 They commit significantly more violent crimes, robberies and assaults each year than women do, according to the Department of Justice. They are more likely to show anger in the workplace and be rewarded for it while women are affected negatively for the same behaviors. They even take up too much space on public transportation when “manspreading”. I could keep going. Men probably dominate all these “terrible” statistics because, now and throughout history, they’ve dominated the world. There is a “manhood in crisis” trend story to match each one pondering whether women can have it all. Powell, who recently released a memoir about his journey to manhood, wrote about spending time on a college campus, working with male college students to find a resolution to the “endless” rape allegations there. Huffingtonpost. Stop Expecting Men To Be Angry - 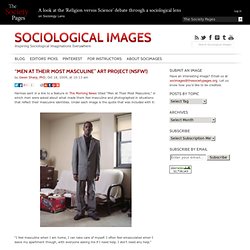 Under each image is the quote that was included with it: “I feel masculine when I am home, I can take care of myself. I often feel emasculated when I leave my apartment though, with everyone asking me if I need help. I don’t need any help.” “To be masculine is to dominate in one’s field of study.” Some of the following are definitely Not Safe for Work, so after the jump… Masculinity Is an Anxiety Disorder: Breaking Down the Nerd Box - Uncanny Magazine. Speaking for myself—the only person I can reasonably speak for—being a Man never seemed like an attainable goal, let alone a desirable one. 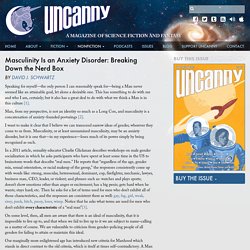 This has something to do with me and who I am, certainly; but it also has a great deal to do with what we think a Man is in this culture [1]. Man, from my perspective, is not an identity so much as a Long Con, and masculinity is a concatenation of anxiety–founded posturings [2]. I want to make it clear that I believe we can transcend narrow ideas of gender, wherever they come to us from. Masculinity, or at least unexamined masculinity, may be an anxiety disorder, but it is one that—in my experience—loses much of its power simply by being recognized as such. In a 2011 article, sexuality educator Charlie Glickman describes workshops on male gender socialization in which he asks participants who have spent at least some time in the US to brainstorm words that describe “real men.” What goes in the Nerd Box can vary.

There can also be a problem of status.