LGBTQIA+ - Community - Resources - Fashion / The Phluid Project. What’s next for the gender fluid fashion movement? Polysexual: someone attracted to multiple genders and identities.

Looks at polysexuality and names some key designers that have started immersing themselves in polysexual fashion. – katielou21

It is the kind of word that someone would expect to hear in a liberal arts college course on gender and sexuality studies. 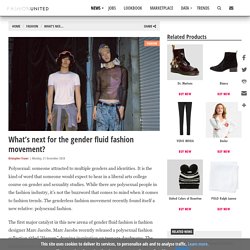 While there are polysexual people in the fashion industry, it’s not the buzzword that comes to mind when it comes to fashion trends. What’s The Real Impact Of The Gender-Fluid Fashion Movement? Ever since Jaden Smith wore that Louis Vuitton skirt, I’ve read more articles about fashion’s so-called “gender-fluid movement” than I can count.

Discusses the idea that there is 2 sides to the gender fluid movement - the commercialised side and the genuine side. (Week 1) – katielou21

I’ve read listicles that proclaim gender-bending style as fashion’s future, interviews in which designers proudly describe their binary-busting bona fides, op-eds pointing to gender fluidity as an antidote to toxic masculinity, as well as plenty of reviews playfully hailing the disruptive potential of men wearing this and women wearing that. 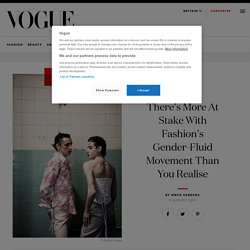 Having read enough of these pieces, it would seem we are living in an unprecedented period of gender upheaval, a time when traditional expectations of what constitutes men’s and women’s dress are being blended, blurred, even reimagined altogether. Of course, this isn’t entirely the case. Read more: Laverne Cox Is British Vogue's First Trans Cover Star What we now call gender-bending fashion has existed as long as there have been gender norms to bend – which is to say long, long before Jaden’s 2016 moment.

Decoding Genderless Fashion, the Future of the Industry. “Unisex,” the industry’s buzzword and symbol for inclusion and diversity, is now more mainstream thanks to brands casting male and female models for their look books and designers casting a broader spectrum of genders for their fashion shows.

But with the advent of unisex collections comes a myriad of questions. 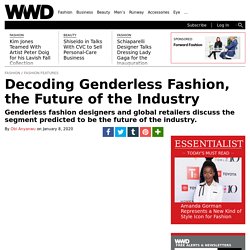 For one, what makes a collection unisex? Also, where does it fit in a store or web site? Few retailers, brands and designers are ready for this movement. Inhabit launched its first genderless collection last fall, Norma Kamali changed her storied brand to a unisex label last year, Umit Benan launched unisex line B+ and Equipment is launching a gender-fluid collection in spring 2020. Nicopanda, Gypsy Sport and Charles Jeffrey Loverboy are among brands cited as genderless labels, as well as streetwear firms Aries and Les Tien, and Huemn, the Indian ready-to-wear brand and Vogue India Fashion Fund winner that offers gender non-binary pieces on its web site.

But are retailers ready? Difference Between Sex And Gender: Is Every Woman A Female? As a result, gender is not to culture as sex is to nature; gender is also the discursive cultural means by which ‘sexed nature’ or ‘a natural sex’ is produced and established as ‘prediscursive,’ before culture, a politically neutral surface on which culture acts. 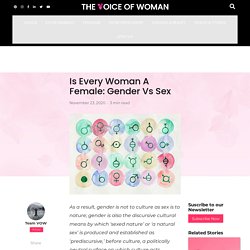 —Judith Butler, Gender Trouble: Feminism and the Subversion of Identity Sex Vs. Gender To have a better understanding of sexual diversity and gender diversity, we need to first educate ourselves with what sex and gender stand for respectively, how are the two terms differ from each other and most importantly the relationship between sex and gender. While these two terms are often considered synonymous with each other, it is not truly so. What is sex? Sex is a medical term that designates a certain combination of physiological characteristics related to the human reproductive system. 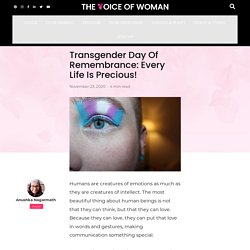