How to Make a Screencast Tutorial for YouTube. One of the most popular types of YouTube video is the screencast — the desktop tutorial that shows you how to do almost anything, from making better use of the Windows 10 shell, to something simple like switching your desktop theme. 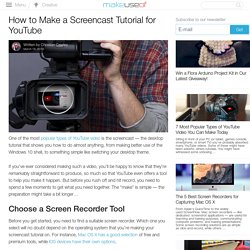 If you’ve ever considered making such a video, you’ll be happy to know that they’re remarkably straightforward to produce, so much so that YouTube even offers a tool to help you make it happen. But before you rush off and hit record, you need to spend a few moments to get what you need together. The “make” is simple — the preparation might take a bit longer… Choose a Screen Recorder Tool Before you get started, you need to find a suitable screen recorder. Elsewhere, Android has a native option now thanks to Google Play Games, and Windows users can also rely on the native option provided by the integrated Xbox Gaming app’s screen recorder, which can be used for games and apps alike, as explained previously. How to Use the PowerPoint Screen Recorder to Engage Your Audience. The array of features that Microsoft PowerPoint offers is quite impressive. 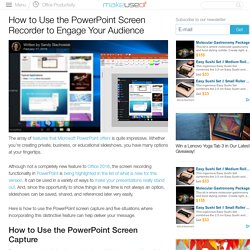 Whether you’re creating private, business, or educational slideshows, you have many options at your fingertips. Although not a completely new feature to Office 2016, the screen recording functionality in PowerPoint is being highlighted in the list of what is new for this version. It can be used in a variety of ways to make your presentations really stand out. And, since the opportunity to show things in real-time is not always an option, slideshows can be saved, shared, and referenced later very easily.

How to Learn Video Production for Free Online. Learning a new skill online isn’t so hard. 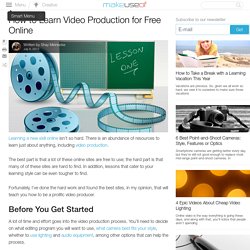 There is an abundance of resources to learn just about anything, including video production. The best part is that a lot of these online sites are free to use; the hard part is that many of of these sites are hard to find. In addition, lessons that cater to your learning style can be even tougher to find. Fortunately, I’ve done the hard work and found the best sites, in my opinion, that will teach you how to be a prolific video producer. Before You Get Started A lot of time and effort goes into the video production process. Teens Make Film In Broken English To Explain Why They'll Fail English : Goats and Soda. A film focuses on the debate about whether classes should be taught in the colonial language of English or French versus the local languages that students understand and speak with fluency. 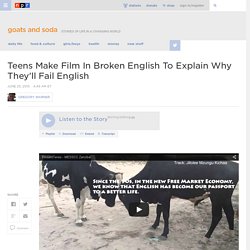 Two minutes into Present Tense, a short film made by three high school students in a fishing village in the East African island of Zanzibar, a set of subtitles lay out their mission: The film examines one of the oldest debates in African education. Should classes be taught in the colonial language of English (or French) or in local languages that students speak and understand more fluently? For the filmmakers, this question charts their future. Tourism is one of Zanzibar's main industries, and learning English is vital to attain a highly prized hotel job. But their primary school education was all in Swahili. The short film is the work of a student film club launched by a retired pilot in Zanzibar. Yakubu Fimbo Suleiman, whom everyone calls Yaks, is the film's student narrator. 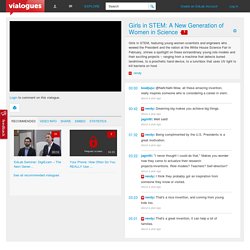 Huzzaz Makes it Easy to Create and Share Online Video Collections. Startup: Huzzaz.comFounder: James YangLaunched: August 2013Based: Dallas, TX The internet is a useful tool but sometimes it can feel like a giant black hole, sucking you in as you search for information. 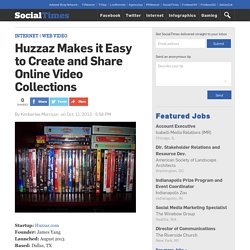 Google is great for searching for brands but the information isn’t well organized. For niche content, Google search isn’t very functional at all. According to James Yang, an electrical engineer turned self-taught web developer, YouTube is much the same as Google. “YouTube is a hosting site but as far as organization it doesn’t really do the job. This is precisely the problem Yang set out to solve when he created Huzzaz, a video curation platform that enables users to create video collections and embed them on other websites. Yang says this can be particularly useful for the education industry. Ryan Drury, a 21-year-old junior at Southern Methodist University says Huzzaz is useful for exactly this purpose. “It’s so useful.