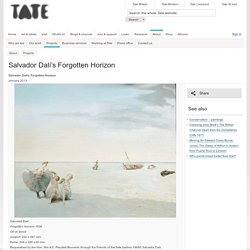 One of a series of small oil paintings on wood panel, it depicts the beach at Rosas on the east coast of Spain with a group of alluringly posed dancers, meant to stimulate the imagination and subconscious. At Tate’s painting conservation studio, the work underwent a technical examination. Visual analysis. ☆☆☆A timeline of Salvador Dali. Dali symbols. Salvador Dalí Biography, Art, and Analysis of Works. Pablo Picasso's Classicism and Surrealism Period. In the period following the upheaval of World War I, Picasso produced work in a neoclassical style. 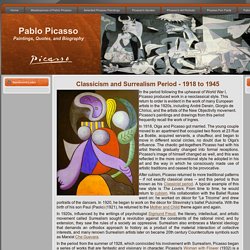 This return to order is evident in the work of many European artists in the 1920s, including André Derain, Giorgio de Chirico, and the artists of the New Objectivity movement. Picasso's paintings and drawings from this period frequently recall the work of Ingres. In 1918, Olga and Picasso got married. The young couple moved to an apartment that occupied two floors at 23 Rue La Boétie, acquired servants, a chauffeur, and began to move in different social circles, no doubt due to Olga's influence. The chaotic get-togethers Picasso had with his artist friends gradually changed into formal receptions. After cubism, Picasso returned to more traditional patterns -- if not exactly classical ones -- and this period is thus known as his Classicist period.

René Magritte: enigmatic master of the impossible dream. TERRY GILLIAM Film director and former member of Monty Python It wasn't until I'd seen Magritte's work collected together in an exhibition at the Tate, at the end of the 1960s I think, that I realised just how incredibly funny his stuff was. 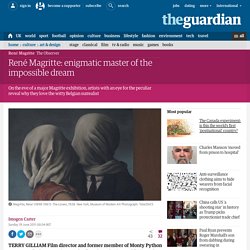 People walk around these exhibitions in a religious state of awe and I just walked round this one laughing uncontrollably. Until then, I'd always thought of Magritte as having an interesting and intriguing mind – the way he would turn things inside out or make that which was solid suddenly not solid. But suddenly here he was, this wonderfully dry joke teller. Freud's influence on Dali's surreal dream art - Park West Gallery. In 1962, surrealist master Salvador Dalí gave the following explanation of his oil painting entitled, Dream Caused by the Flight of a Bee Around a Pomegranate One Minute Before Awakening (1944): “[It was intended] to express for the first time in images Freud’s discovery of the typical dream with a lengthy narrative, the consequence of the instantaneousness of a chance event which causes the sleeper to wake up. 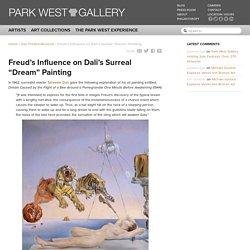 Thus, as a bar might fall on the neck of a sleeping person, causing them to wake up and for a long dream to end with the guillotine blade falling on them, the noise of the bee here provokes the sensation of the sting which will awaken Gala.” Salvador Dali, Park West Gallery”Dream Caused by the Flight of a Bee around a Pomegranate a Second Before Awakening” (1944), Salvador Dali. Thyssen-Bornemisza Museum, Madrid. ©Salvador Dalí, Gala-Salvador Dalí Foundation/Artists Rights Society (ARS), New York.

Read Ewell’s full essay Related Links: Surrealism and Freudian Theory. The Marvelous Mind of Surrealism In the Surrealist Manifesto of 1924, André Breton wrote, “I believe in the future resolution of these two states — outwardly so contradictory — which are dream and reality, into a sort of absolute reality, a surreality, so to speak, I am aiming for its conquest, certain that I myself shall not attain it, but too indifferent to my death not to calculate the joys of such possession.” 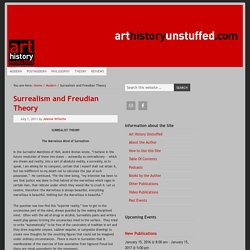 He continued, “For the time being, “my intention has been to see that justice was done to that hatred of the marvellous which rages in certain men, that ridicule under which they would like to crush it. Dada. Dada emerged amid the brutality of World War I (1914–18)—a conflict that claimed the lives of eight million military personnel and an estimated equal number of civilians. 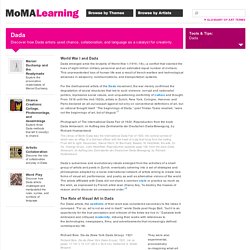 Dada Movement, Artists and Major Works. Synopsis Dada was an artistic and literary movement that began in Zürich, Switzerland. 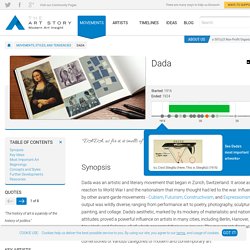 It arose as a reaction to World War I and the nationalism that many thought had led to the war. Hans Arp Biography, Art, and Analysis of Works. "Art is a fruit that grows in man like a fruit on a plant or a child in its mother's womb. 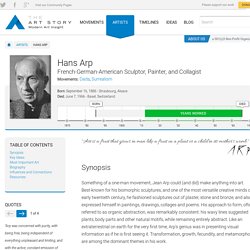 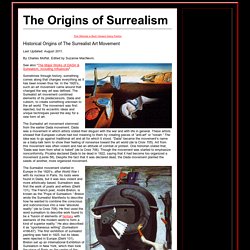 By Charles Moffat. Dada and dadaism : history of the Dada movement. Dada: artists' response to WWI A short video from the Cabaret Voltaire presenting Dada. 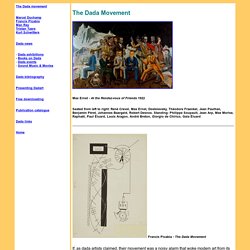 Zurich was the birthplace of the Dada movement and its opposition to the cultural values its artists believed had led to the First World War. It all began at the city's Cabaret Voltaire in February 1916.