God's Creative Gift — Unleashing the Artist in You – Inspiration, Resources & Bible studies from Jody Thomae. Letters to the Wounded, From the Wounded. (This is the seventh part in a series. 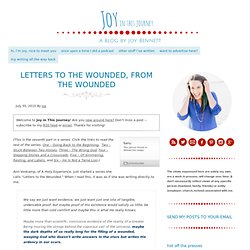 Click the links to read the rest of the series: One – Going Back to the Beginning, Two – Stuck Between Two Horses, Three – The Wrong God, Four – Stepping Stones and a Crossroads, Five – Of Simmering, Resting, and Labels, and Six – He Is Not a Tame Lion.) Ann Voskamp, of A Holy Experience, just started a series she calls “Letters to the Wounded.” When I read this, it was as if she was writing directly to me. We say we just want evidence, we just want just one iota of tangible, undeniable proof, but maybe proof of His existence would satisfy us little, be little more than cold comfort and maybe this is what He really knows.Maybe more than scientific, conclusive evidence of the reality of a Greater Being moving the strings behind the vaporous veil of the universe, maybe the dark depths of us really long for the filling of a wounded, weeping God who doesn’t write answers in the stars but writes His ardency in our scars.With His scars.

This I know. Joy. Why Thorns and Gold? I don’t know exactly what I will be writing in my blog, but I suspect there will be a few posts on illness, suffering, and what it means to have a Christian perspective on these things. 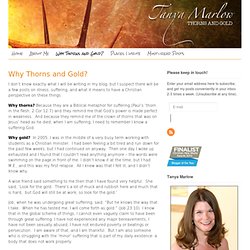 Why thorns? Because they are a Biblical metaphor for suffering (Paul’s ‘thorn in the flesh, 2 Cor 12:7) and they remind me that God’s power is made perfect in weakness. And because they remind me of the crown of thorns that was on Jesus’ head as he died; when I am suffering, I need to remember I know a suffering God. Why gold? In 2005, I was in the middle of a very busy term working with students as a Christian minister. A wise friend said something to me then that I have found very helpful. Job, when he was undergoing great suffering, said, “But he knows the way that I take. To the limited extent that I suffer, I want that suffering to be productive, to bring about holiness and a purity of character.

So the ‘gold’ part is my prayer. Thanks for reading! A Holy Experience. Amish Forgiveness. (Part 2) The Amish response of forgiveness in the wake of the tragic schoolhouse shooting of ten Amish girls at Nickel Mines in Southern Lancaster County shocked the world. 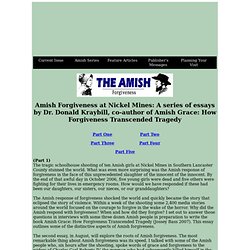 Forgiveness quickly became the big story, eclipsing the story of violence. In part one of this series, I described some of the traits of Amish forgiveness. But why did the Amish forgive? I searched for answers to that question in interviews with some three dozen Amish people in preparation for writing Amish Grace: How Forgiveness Transcended Tragedy. As I spoke with Amish people in the weeks following the tragedy, I asked, “What led you to forgive Charles Roberts?” More frequently, however, Amish people referred to the Lord’s Prayer found in chapter six of Matthew’s Gospel. The Lord’s Prayer holds great significance for the Amish because it is their central liturgical prayer.

Thus for the Amish, forgiveness is a high and holy virtue that is directly tied to salvation. Melanie Kirkpatrick — Journalist, Author, Hudson Institute Senior Fellow. The Radical.net Blog. Population: 13,005,000 Language: Khmer, Cambodian Religion: Buddhism (89.82%) %Christian/%Evangelical: 3.2%/1.7% About: The Central Khmer inhabit the western and central portions of Cambodia, and make up the majority of the country’s total population. The Central Khmer speak an Eastern Mon-Khmer language called Khmer, or Cambodian. The Khmer Empire, which flourished between the ninth and thirteenth centuries, encompassed present-day Laos, Thailand, Cambodia, and southern Vietnam.

In 1969, Cambodia suffered bombings by the U.S. and invasions by the Vietnamese; events that threw the country into turmoil. Where Was God? Mike Huckabee's Incredible Response to the Newtown Shooting Tragedy. Evidence of Things Not Seen. "Now faith is the substance of things hoped for, the evidence of things not seen. 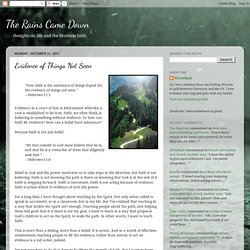 " —Hebrews 11:1 Evidence, in a court of law, is information whereby a case is established to be true. Faith, we often think, is believing in something without evidence. So how can faith BE evidence? How can a belief have substance? Because faith is not just belief. "He that cometh to God must believe that he is, and that he is a rewarder of them that diligently seek him. " Belief in God and His power motivates us to take steps in His direction, but faith is not believing. For a long time, I have thought about teaching by the Spirit. This is more than a feeling, more than a belief. I'm not sure how to do that, how to facilitate the growth of faith. Make Way Partners. FathersDream - home.