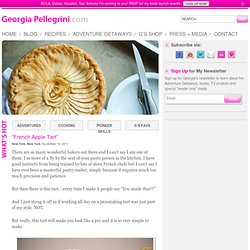 November 10, 2011 There are so many wonderful bakers out there and I can’t say I am one of them. I’m more of a fly by the seat of your pants person in the kitchen. I have good instincts from being trained by lots of stern French chefs but I can’t say I have ever been a masterful pastry maker, simply because it requires much too much precision and patience.

But then there is this tart… every time I make it people say “You made that?!” And I just shrug it off as if working all day on a painstaking tart was just part of my style. But really, this tart will make you look like a pro and it is so very simple to make. You’ll need very little for the filling: stewing apples like golden delicious for the compote, and firmer apples like gala for the top. For the tart shell you can buy one pre-made, or you can make this super simple tart dough. You start with the filling by peeling 4-5 apples. Cut them into wedges. Then cut the core off each wedge. Keep going around and around. Tiny Tarts: How to make Pie in a Jar. I love giving thoughtful homemade gifts to friends and family. 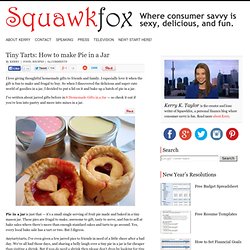 I especially love it when the gift is fun to make and frugal to buy. So when I discovered the delicious and super cute world of goodies in a jar, I decided to put a lid on it and bake up a batch of pie in a jar. I’ve written about jarred gifts before in 8 Homemade Gifts in a Jar — so check it out if you’re less into pastry and more into mixes in a jar. Pie in a jar is just that — it’s a small single serving of fruit pie made and baked in a tiny mason jar. These pies are frugal to make, awesome to gift, tasty to serve, and fun to sell at bake sales where there’s more than enough standard cakes and tarts to go around.

Anytartytarts, I’ve even given a few jarred pies to friends in need of a little cheer after a bad day. Homemade pop tarts. I never had a Pop-Tart until college. 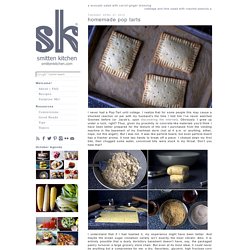 I realize that for some people this may cause a shocked reaction on par with my husband’s the time I told him I’ve never watched Goonies before (or Jacob’s, upon discovering the internet). Obviously I grew up under a rock, right? Thus, given my proximity to concrete-like materials you’d think I have been better prepared for the texture of the one I purchased from the vending machine in the basement of my freshman dorm (not at 4 a.m. or anything, either, nope, not this angel!). But I was not. It was like particle board, but even particle board has a fresher aroma. How To Make Croissants [Chocolate Croissants, Pumpkin Spice Croissants, and Cinnamon Sugar Croissants] I hope you’re ready to see a billion underexposed photos of the same exact dough over and over and over again. 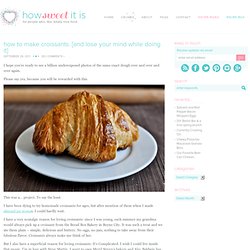 Please say yes, because you will be rewarded with this. This was a… project. To say the least. I have been dying to try homemade croissants for ages, but after mention of them when I made almond joy scones, I could hardly wait. I have a very nostalgic reason for loving croissants: since I was young, each summer my grandma would always pick up a croissant from the Bread Box Bakery in Boyne City. But I also have a superficial reason for loving croissants: It’s Complicated.

Too bad they don’t mention that it takes like 14 hours to really make croissants. I’m not about to tell you “oh! Oh… and I made four flavors of croissants: traditional, chocolate, cinnamon sugar and pumpkin spice. Easy enough… it all starts with some yeast and flour. I know you have all of the ingredients in your kitchen, which means you should probably start right now.

{recipe} Not Your Childhood Chicken Potpie. Growing up, chicken potpie meant a Swanson’s frozen dinner, pulled hot from the oven before my parents escaped for a night of freedom. 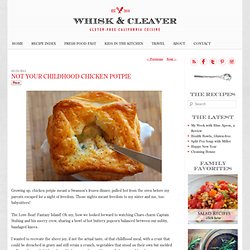 Those nights meant freedom to my sister and me, too: babysitters! The Love Boat! Fantasy Island! Oh my, how we looked forward to watching Charo charm Captain Stubing and his merry crew, sharing a bowl of hot buttery popcorn balanced between our nubby, bandaged knees. I wanted to recreate the sheer joy, if not the actual taste, of that childhood meal, with a crust that could be drenched in gravy and still retain a crunch, vegetables that stood on their own but melded well together, and chicken that added a savory layer of its own.

The filling is so thick, you can stand a spoon in it Easy and homemade chicken potpie aren’t usually used in the same sentence, this much I know. Traditional chicken potpie, frozen or otherwise, usually includes this vegetable trifecta: peas, pearl onions and carrots. Cut three slits in the dough before placing into the oven.