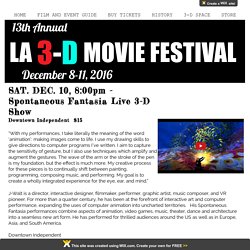 For more than a quarter century, he has been at the forefront of interactive art and computer performance, expanding the uses of computer animation into uncharted territories. His Spontaneous Fantasia performances combine aspects of animation, video games, music, theater, dance and architecture into a seamless new art form. He has performed for thrilled audiences around the US as well as in Europe, Asia, and South America. Downtown Independent. 13th Annual LA 3-D Movie Festival. International 3D festival. What? 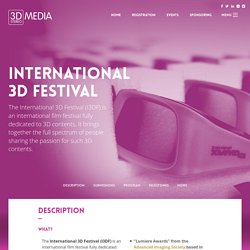 The International 3D Festival (I3DF) is an international film festival fully dedicated to "3D contents", i.e. to stereoscopic-3D (S-3D) film and VR content. It brings together the full spectrum of people sharing the passion for such 3D contents. I3DF features competitions, awards, and screenings (with many open to the general public). I3DF features two types of awards: "Lumiere Awards" from the Advanced Imaging Society based in Hollywood, CA, available for eligible contents from Europe, the Middle East, and North Africa (EMENA), and recognizing contents;"3D Guild Awards" from the 3D Guild (3DG) based in Brussels, Belgium, available for eligible contents from anywhere the world, and recognizing individuals. 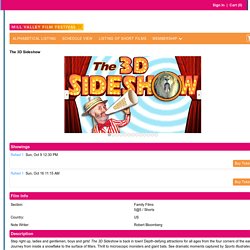 The 3D Sideshow is back in town! Depth-defying attractions for all ages from the four corners of the earth! Journey from inside a snowflake to the surface of Mars. Platige Image 3D: Studio Focus + Ola Watras Q&A (15) – London International Animation Festival. Poland’s Platige Image Film Studio is having a very major say in the shaping of 3D stereoscopic animation. 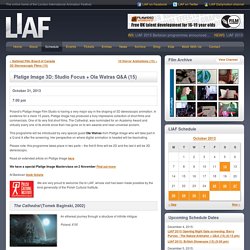 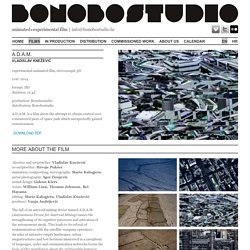 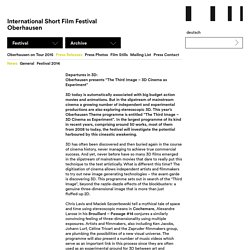 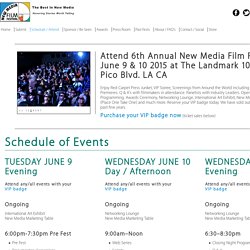 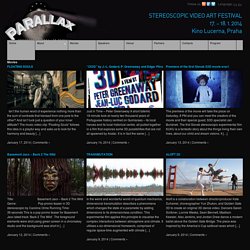 And isn’t luck just a question of your inner attitude? The music video clip “Floating Souls” follows this idea in a playful way and asks us to look for the harmony and beauty […] Just in Time – Peter Greenaway A short totemic 18-minute Iook at nearly two thousand years of Portuguese history centred on Guimaraes – its local heroes and its local historical centre. all pulled together in a film that explores some 3D possibilities that are not all spawned by Avatar. It is in fact the same […] The premiere of the movie will take the place on Saturday, 8 PM and you can meet the creators of the movie and their special guest, S3D specialist Jan Buriánek. The London 3D Film Festival. 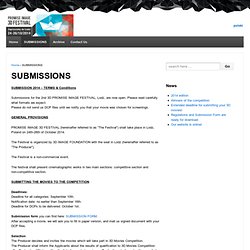 Please read carefully what formats we expect. Digital Domain Co-Founder Scott Ross Reveals Plan for "Burning Man Meets TED" VFX Festival. Scott Ross — co-founder and former CEO of Digital Domain — has been among the most vocal in the effort to bring change to the struggling VFX business. 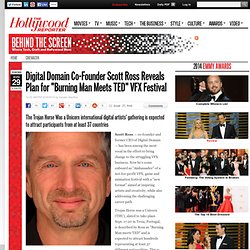 Now he's come onboard as "Ambassador" of a not-for-profit VFX, game and animation festival with a "new format" aimed at inspiring artists and creativity, while also addressing the challenging career path. Trojan Horse was a Unicorn (THU), slated to take place Sept. 17-20 in Troia, Portugal, is described by Ross as "Burning Man meets TED" and is expected to attract hundreds representing at least 37 different nationalities.

This is the second such event, but with Ross now involved and increasing industry support, organizers hope it will grow to become an impactful annual event. Charlie Victor Romeo - Film Forum NY Opening Jan 29, 2014. Brian May Goes Stereoscopic Again - uDiscover. Queen guitar hero Brian May has returned to his fascination with science for another book project with an academic from Leicester in the English midlands — and this time it has prompted an exhibition at the Tate Gallery. For the new work, May goes stereoscopic again, in collaboration for a second time with De Montfort University doctoral student Denis Pellerin. The unlikely friends have already produced last year’s ‘Diableries: Stereoscopic Adventures In Hell,’ which gathered together the 3D stereoscopic diorama images that were the rage in the 1860s.

Now they have completed the 208-page ‘Poor Man’s Picture Gallery,’ to be published in October, featuring 260 Victorian era illustrations that can be viewed through an ‘Owl’ stereoscope viewer, supplied with the book, that’s been designed by Dr. Jon Lyus - at HeyUGuys. Nerdly » Frightfest 2014: ‘Shockwave Darkside 3D’ Review. 3D Cinema System Components. Forum. Film and Video tips (KarelsTweets) Cinema Listings for 3D Movies in London and the UK. With Free Online Screeners, Is FilmFreeway Braced to Become Withoutabox's Serious Competition? When Withoutabox first showed up, it was a boon to filmmakers. Not having to fill out a different form for every film festival submission saved endless headaches for us, and made the review process easier for film festivals. But this summer, alternative submission platform FilmFreeway has been steadily gaining respectable festivals to its banner, and toting an easy interface, free online screeners, and recent platform additions that bring it up to speed with Withoutbox, it might prove to be an enticing replacement to filmmakers frustrated with the WAB monopoly.

One of the growing sources of discontent between filmmakers and Withoutabox has been the WAB online screeners. The concept of an online screener is great — it saves the filmmaker a trip to the post office, time in getting the DVD to programmers, not to mention it saves trees (and whatever substance DVDs are made of.) How does the rest of FilmFreeway stack up to Withoutabox? Here is the familiar layout of Withoutabox: Links: 3D Image Festival. The Ritzy, Brixton, London.

Just a short tube ride from central London, The Ritzy should not be overlooked as an event venue. Offering a choice of five screens, an upstairs bar and a range of cuisine made on site by our own chefs, The Ritzy is a superb choice for a variety of events, from AGMs to parties, from large conferences to smaller meetings. With high-quality digital technology, tiered seating and unobstructed views of the screen, your event can only benefit from the equipment at your disposal and the enthusiasm of our team.

With Day Delegate rates from as little as £25 excl. VAT, value for money is a real plus, and although we offer great value, there is no scrimping on service or attention to detail. 3 Psychological Traps that Keep Your Startup in Sorrow. Prince Charles Cinema, London - Cinema Hire - Screening Room. Located 50 yards from London's Leicester Square the Prince Charles Cinema is "the countries funkiest cinema" (Evening Standard) and its most successful independent screen.

Its prime West End situation is enhanced by its reputation throughout the Film industry for being quirky, innovative and just a little bit different. Now with the addition of our new smaller second screen, we feel we can offer all events a home at the Prince Charles Cinema, whether it be large or small we can offer you a proper event solution. The cinema now has the décor to match the attitude with a sensual red auditorium with 285 plush seats downstairs and a new plush purple 104 seat screen with executive, high back purple leather recliner chairs upstairs.

Some of the following schemes are now available to apply for. Sign up for the Exhibitors' Newsletter for scheme opening dates Community Screen Scheme Through this Scheme, Film Hub London supports community programming initiatives which aim to reach new or underserved audiences in their local area. Read more about the Community Screen Scheme and apply Boost Award Aimed at enabling exhibitors to broaden their programming and increase engagement opportunities, this scheme subsidises screening fees, film transport, talent appearances and Q&As to support screenings.

Films. Backstage pass: Blending the surreal with the shocking, in 3D. International 3D & Advanced Imaging Society Names Officers and Board. SCI-FI-LONDON Film Festival. Charlie Victor Romeo. Night of the Living Dead 3D (2006) National Film Board of Canada 3D Stereoscopic Films (15) – London International Animation Festival. The National Film Board of Canada has one of the most sophisticated 3D stereoscopic labs in the world. The films that come out of this sublime creative engine-room showcase just what 3D stereoscopic animation is truly capable of. Curated by the NFB’s head of 3D Animation, Munro Ferguson, this programme is a stunning collection of films unleashed from all the restraints that smother most 3D stereoscopic animation that’s floating around out there.