Edward Snowden on the accelerating pace of whistleblowing, and what it means for state secrecy / Boing Boing. After Daniel Ellsberg's astonishingly courageous release of the Pentagon Papers to the New York Times, he waited 40 years to meet someone like Edward Snowden or Chelsea Manning, someone else inside who risked everything to expose the wrongdoing they had sworn to oppose. 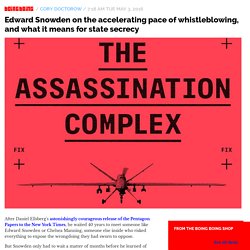 Leaked memos reveal GCHQ efforts to keep mass surveillance secret. The UK intelligence agency GCHQ has repeatedly warned it fears a "damaging public debate" on the scale of its activities because it could lead to legal challenges against its mass-surveillance programmes, classified internal documents reveal. 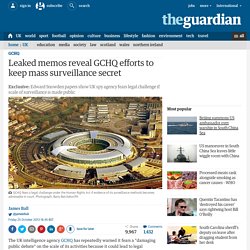 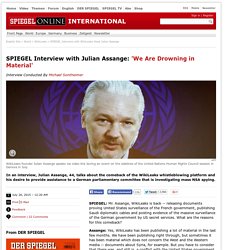 Assange, WikiLeaks is back -- releasing documents proving United States surveillance of the French government, publishing Saudi diplomatic cables and posting evidence of the massive surveillance of the German government by US secret services. What are the reasons for this comeback? Assange: Yes, WikiLeaks has been publishing a lot of material in the last few months. We have been publishing right through, but sometimes it has been material which does not concern the West and the Western media -- documents about Syria, for example. But you have to consider that there was, and still is, a conflict with the United States government which started in earnest in 2010 after we began publishing a variety of classified US documents. SPIEGEL: What did this mean for you and for WikiLeaks?

Assange: The result was a series of legal cases, blockades, PR attacks and so on. SPIEGEL: What difficulties did you have to overcome? Assange: There had been attacks on our technical infrastructure. Q&A: On the Untouchable 'Lords of Secrecy' Powerful, unaccountable, and operating far in the shadows, the Lords of Secrecy, as author Scott Horton calls them, are real, and they are in charge of our national security state. 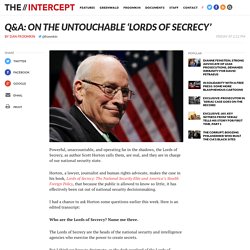 Horton, a lawyer, journalist and human rights advocate, makes the case in his book, Lords of Secrecy: The National Security Elite and America’s Stealth Foreign Policy, that because the public is allowed to know so little, it has effectively been cut out of national security decisionmaking. I had a chance to ask Horton some questions earlier this week. Here is an edited transcript: The History of the CIA in Hollywood Movies. Even though Hollywood has always been fond of spy thrillers, it didn't really notice the CIA until the 60s, when agent Felix Leiter, played by Jack Lord, appeared in "Dr. 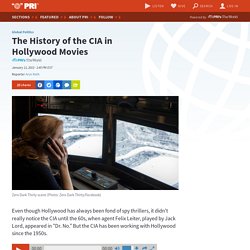 The CIA developed a think tank to fight communist ideology, which negotiated the rights to George Orwell's "Animal Farm" – getting a talking pig on the screen 20 years before "Charlotte's Web But while the CIA used Hollywood to project an American ideal, they didn't seem much concerned with their own image. Signaling Post-Snowden Era, New iPhone Locks Out N.S.A. Photo WASHINGTON — Devoted customers of products these days worry about whether the new 6 will bend in their jean pockets. 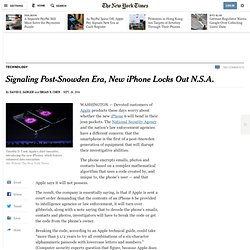 The and the nation’s law enforcement agencies have a different concern: that the smartphone is the first of a post-Snowden generation of equipment that will disrupt their investigative abilities. The phone encrypts emails, photos and contacts based on a complex mathematical algorithm that uses a code created by, and unique to, the phone’s user — and that Apple says it will not possess. The result, the company is essentially saying, is that if Apple is sent a court order demanding that the contents of an iPhone 6 be provided to intelligence agencies or law enforcement, it will turn over gibberish, along with a note saying that to decode the phone’s emails, contacts and photos, investigators will have to break the code or get the code from the phone’s owner.

Already the new phone has led to an eruption from the director of the F.B.I., James B. The Liberal Surveillance State. Long time readers of Sean Wilentz will remember him for greatest hits like his notorious piece on the “cutthroat, fraudulent politics that lie at the foundation of Obama’s supposedly uplifting campaign,” involving “the most outrageous deployment of racial politics since the Willie Horton ad campaign in 1988 and the most insidious since Ronald Reagan kicked off his 1980 campaign in Philadelphia, Mississippi, praising states’ rights,” or his claim that not only was Obama’s “most obvious change to liberal politics” the color of his skin, but Obama was the second coming of Jimmy Carter and a starry-eyed Russia-hugger to boot. 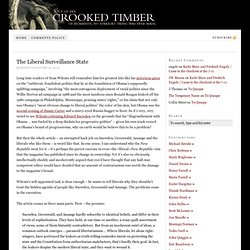 So it’s very, very weird to see Wilentz criticizing Edward Snowden on the grounds that his “disgruntlement with Obama … was fueled by a deep disdain for progressive politics” – given his own track record on Obama’s brand of progressivism, why on earth would he believe this to be a problem? The article comes in three main parts. First – the promise: Yahoo webcam images from millions of users intercepted by GCHQ. Britain's surveillance agency GCHQ, with aid from the US National Security Agency, intercepted and stored the webcam images of millions of internet users not suspected of wrongdoing, secret documents reveal. 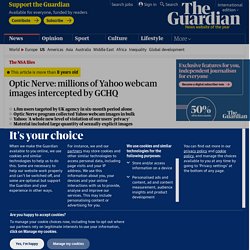 GCHQ files dating between 2008 and 2010 explicitly state that a surveillance program codenamed Optic Nerve collected still images of Yahoo webcam chats in bulk and saved them to agency databases, regardless of whether individual users were an intelligence target or not. In one six-month period in 2008 alone, the agency collected webcam imagery – including substantial quantities of sexually explicit communications – from more than 1.8 million Yahoo user accounts globally. Yahoo reacted furiously to the webcam interception when approached by the Guardian. The company denied any prior knowledge of the program, accusing the agencies of "a whole new level of violation of our users' privacy". GCHQ insists all of its activities are necessary, proportionate, and in accordance with UK law. British Spies Said to Intercept Yahoo Webcam Images.

SAN FRANCISCO — A British intelligence agency collected video webcam images — many of them sexually explicit — from millions of Yahoo users, regardless of whether they were suspected of illegal activity, according to accounts of documents leaked by Edward J. 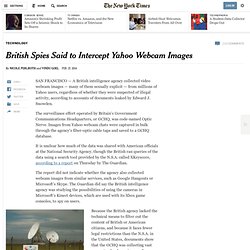 Snowden. The surveillance effort operated by Britain’s Government Communications Headquarters, or GCHQ, was code-named Optic Nerve. Images from Yahoo webcam chats were captured in bulk through the agency’s fiber-optic cable taps and saved to a GCHQ database. It is unclear how much of the data was shared with American officials at the National Security Agency, though the British ran queries of the data using a search tool provided by the N.S.A. called XKeyscore, according to a report on Thursday by The Guardian. Snowden Was Justified. The Liberal Surveillance State. What Obama Really Meant Was ... - Chris Hedges. What Obama Really Meant Was ... 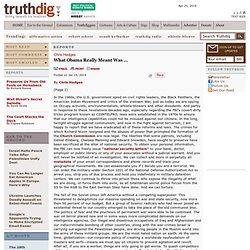 Posted on Jan 19, 2014 By Chris Hedges. WikiLeaks, Greenwald blast Guardian journalist’s book on ‘FSB prisoner’ Snowden. NSA files decoded: Edward Snowden's surveillance revelations explained. Two factors opened the way for the rapid expansion of surveillance over the past decade: the fear of terrorism created by the 9/11 attacks and the digital revolution that led to an explosion in cell phone and internet use. But along with these technologies came an extension in the NSA’s reach few in the early 1990s could have imagined. Details that in the past might have remained private were suddenly there for the taking.