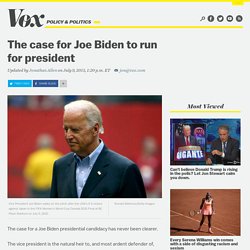 The vice president is the natural heir to, and most ardent defender of, President Barack Obama's legacy. In a time of polarization and Republican control of Congress, he's the Democrat with the best record of working with Republicans on Capitol Hill. And he may be the only Democrat who could be a viable alternative — and viable threat — to frontrunner Hillary Clinton. Couple those factors with the recent rise of Bernie Sanders, which points as much to Clinton's vulnerability as Sanders's strength, and the odds of Biden giving Clinton a serious run for her money don't look so long. Both of his sons, Beau and Hunter Biden, encouraged him to run before Beau died in May, the Wall Street Journal reported last month. Biden hasn't given any public indication of whether he'll run or not, and those closest to him aren't talking about it, citing the vice president's grieving process. 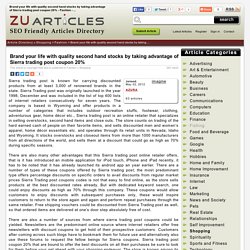 Sierra Trading post was originally launched in the year 1998, December and was included in the list of top 400 lists of internet retailers consecutively for seven years. When quantum mechanics and international relations collide. Wars and atoms have, as it were, a conjugated history. 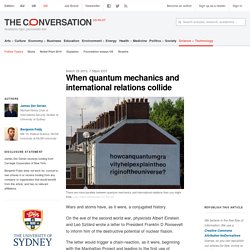 On the eve of the second world war, physicists Albert Einstein and Leó Szilárd wrote a letter to President Franklin D Roosevelt to inform him of the destructive potential of nuclear fission. The letter would trigger a chain-reaction, as it were, beginning with the Manhattan Project and leading to the first use of nuclear weapons, continuing through to an arms race without end. Einstein later offered a baleful post-mortem: The unleashed power of the atom has changed everything save our modes of thinking, and thus we drift toward unparallelled catastrophe.

On the eve of the first world war, German Chancellor Theobald von Bethmann Hollweg predicted that the coming violence would “overthrow all that exists”. But these events would also enable a series of revolutions that made possible a paradigmatic shift to a new, post-Newtonian logic that led to the later discoveries in atomic physics. Two revolutions Total science Quantum politics.

The Car that Changed Rally Racing Forever. Ood cars are a dime a dozen, and they get you from point A to point B daily, with little drama or fanfare.

But great cars are a different breed. They’re memorable for more than just consistency. They inspire driving, and their road prowess is spoken of, lusted after and ardently sought after for generations. The Audi Sport Quattro sits in the realm of “Great”, and the Ingolstadt manufacturer has built its now-stellar reputation on the foundation of their permanent all-wheel-drive Quattro system. But that car is far more than just a historical moment for the brand. MORE LEGENDS: Jensen Interceptor | Volkswagen Type 14 Karmann Ghia | Maserati Ghibli What It’s All About The Sport Quattro is known for one thing — changing rally racing forever. The traction present in conditions like mud, gravel, ice and snow gave the Quattro a leg up on the competition, and after it proved itself, all-wheel-drive became the de-facto drive system for most competition rally cars. Technical Rundown. Sierra trading post coupon 20% 26 Tips for Improving Your Social Media Marketing.

Does your social media need a boost? 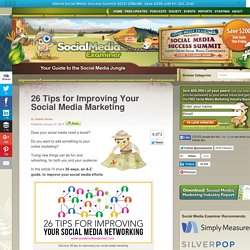 Do you want to add something to your online marketing? Trying new things can be fun and refreshing, for both you and your audience. In this article I’ll share 26 ways, an A-Z guide, to improve your social media efforts. Discover 26 tips for improving your social media marketing. #1: Add Audio. Many, many Facebook users still don't know that their news feeds are filtered by an algorithm. For heavy Facebook users, let alone social media gurus, the idea that Facebook’s news feed is filtered by an algorithm is very, very old news. 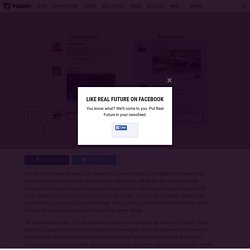 But a majority of everyday Facebook users in a recent study had no idea that Facebook constructs their experience, pushing certain posts into their stream and leaving others out. And worse, many participants blamed themselves, not Facebook’s software, when friends or family disappeared from their news feeds. “In the extreme case, it may be that whenever a software developer in Menlo Park adjusts a parameter, someone somewhere wrongly starts to believe themselves to be unloved,” wrote a team of researchers led by University of Illinois at Urbana-Champaign doctoral student Motahhare Eslami, in a new paper on Facebook’s news feed algorithm. The new qualitative research study sampled 40 Facebook users and ran them through an in-depth examination of the ways that Facebook filters their experience.