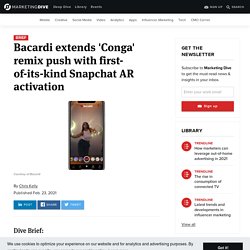 The activation is an extension of its "Conga Feat. You" campaign that revolves around a remix of Miami Sound Machine's "Conga" featuring Meek Mill, Leslie Grace and Boi-1da.After scanning the Bacardi Snapcode, users are guided through a series of dance moves accompanied by 3D augmented reality (AR) animations. 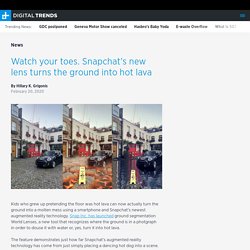 Snap Inc. has launched ground segmentation World Lenses, a new tool that recognizes where the ground is in a photgraph in order to douse it with water or, yes, turn it into hot lava. The feature demonstrates just how far Snapchat’s augmented reality technology has come from just simply placing a dancing hot dog into a scene. The ground segmentation technology uses machine learning to identify which parts of the image are the ground and which are not, a challenge that involved teaching a computer the geometry and semantics of the real world. Once the camera recognizes what the ground is, the AR lenses will turn the ground into hot lava, complete with steam and unscathed patches of ground to jump on.

How Snapchat's New Dynamic Ads Can Boost Your DTC Brand's Relevance. As we look ahead to the holidays, retail, e-commerce, and other direct-to-consumer (DTC) brands are fine-tuning their plans and pursuing every possible opportunity to reach consumers. 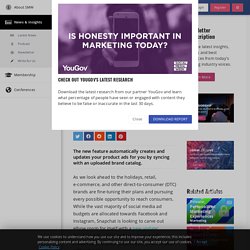 While the vast majority of social media ad budgets are allocated towards Facebook and Instagram, Snapchat is looking to carve out elbow room for itself with a new update: Dynamic Ads, a feature that automatically creates and updates product ads to run for you within the app. Here’s a breakdown of its key benefits and how you can begin to implement them into your strategy: Enhanced creative quality Utilizing the product images and information you upload, Snap’s Dynamic Ads will create customized, built-in templates for you. As a result, you can easily create variations of different Snap ads in vertical view format. Increased return on effort To avoid having your ads feel generic, you can use the same product image across five different template styles as depicted below. Greater ad relevance Success stories. Snapchat Ads for Business. Snapchat was founded on the belief that talking with photos and videos, with our real friends, was more personal and more fun than texting or keeping up on social media. 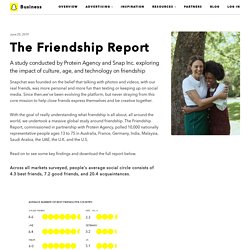 Since then,we’ve been evolving the platform, but never straying from this core mission to help close friends express themselves and be creative together. With the goal of really understanding what friendship is all about, all around the world, we undertook a massive global study around friendship. The Friendship Report, commissioned in partnership with Protein Agency, polled 10,000 nationally representative people ages 13 to 75 in Australia, France, Germany, India, Malaysia, Saudi Arabia, the UAE, the U.K. and the U.S. Read on to see some key findings and download the full report below.

Snapchat’s First Global Campaign Focuses on Friends. 18 Experts Reveal Their Top Instagram Growth Hacks. Sign In. I Studied 8,383 Snapchat Discover Stories – On Advertising – Medium. The Snapchat audience continues to grow past 100 million, according to Business Insider, and publishers are looking at the app as a new way to connect content to users. 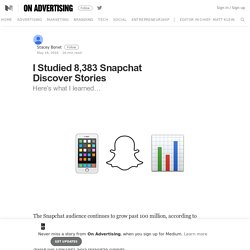 Forty-five percent of those users are between 18 and 24 years old and 15 million of those users, per day, are swiping left to view news on Snapchat Discover says Business Insider. Snapchat Discover turned one at the end of January 2016. Shortly after that anniversary, the Wall Street Journal and MTV got on board, rounding out the list of outlets on Discover to a total of 20. The International Business Times says Snapchat Discover is “publishing’s shiniest new object.” A September 2015 article in Fortune pointed out the limited amount of space available to publishers on Discover has executives vying for a chance at a channel. 60 astuces cachées sur Snapchat. 5 Ways to Generate Leads From Snapchat : Social Media Examiner.

10 of the Best Brands on Snapchat Right Now (And Why They're So Great) Snapchat 101 for Brands: What Marketers Need to Know. Marketers Are Getting the Snapchat Targeting Data They Want. Will That Scare Off Users? Having wowed advertisers at the Cannes Lions in June with the unveiling of its long-awaited ad tech platform, Snapchat has shown no signs of slowing down. 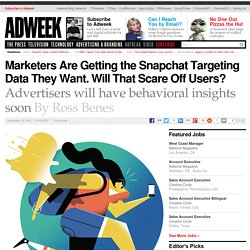 The popular messaging app plans to attract deep-pocketed marketers and investors with the introduction of in-app behavioral targeting in the fourth quarter timed to a rumored IPO. To improve ad targeting, the popular messaging app last week announced Snap Audience Match, which lets brands take their email lists and files of mobile device IDs, and then anonymously sync the data with Snapchat's user pool. Snapchat Discover arrive en France. Snapchat Cuts Local Stories in Strategy Shift to Live Events. Snapchat is ending its daily local stories for cities feature, which pulled together video of everyday activities -- concerts, cute puppies in the park -- shot by users in locales such as New York. 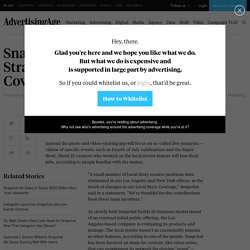 Instead the photo and video-sharing app will focus on so-called live moments -- videos of specific events, such as Fourth of July celebrations and the Super Bowl. About 15 curators who worked on the local stories feature will lose their jobs, according to people familiar with the matter. "A small number of Local Story curator positions were eliminated in our Los Angeles and New York offices, as the result of changes to our Local Story Coverage," Snapchat said in a statement.

"We're thankful for the contributions from these team members. " As closely held Snapchat builds its business model ahead of an eventual initial public offering, the Los Angeles-based company is evaluating its products and strategy. -- Bloomberg News. While Some Retailers Ignore Snapchat, Others Are Killing It With Lens and Geofilter Ads. Attention retailers: There's a pile of missed marketing opportunities in Aisle 5 that needs to be cleaned up. 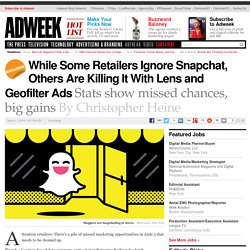 Placed, a location-based data company, arrived at unflattering findings for brick-and-mortar chains after looking at which ones were often patronized by users of Snapchat, a veritable gold mine leading into the back-to-school season. Sixty percent of the 65 most-visited merchants, Placed discovered, hadn't even bothered to launch an account on the mobile app that counts 150 million global users, many of whom belong to the coveted Gen Z and millennial demos. Snapchat Is Letting More Brands Run Ads Between Friends' Stories. When Snapchat unleashed its ad-tech program Snap Partners in June with plans to serve video ads between stories, observers wondered how users would respond to seeing ads alongside their friends' videos and photos. 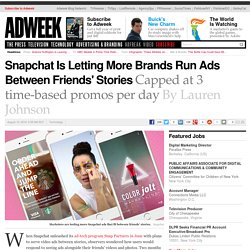 Two months in, Snapchat is already expanding its initial pilot to include more advertisers eager to reach the app's 150 million daily users. The ads appear between strings of photos and videos that users have share with their followers. Marketers Are Slowly Experimenting With Audio in Their Snapchat and Facebook Videos. For the past year or so, Facebook has conditioned advertisers and publishers to create video that can be understood without sound, as more clips that play automatically (and silently) when users scroll fill news feeds. 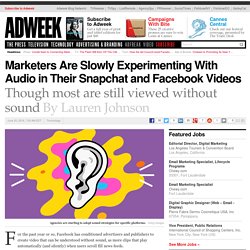 With 100 million hours of video viewed every day and the explosion of autoplay and live video outside of Facebook, the push for muted clips has been widely pitched by social platforms and ad-tech companies alike. Even Without an Official Presence, Snapchat Is Everywhere at the NewFronts. Millennials Are All on Snapchat and Instagram, Right? Maybe Not [Study] On Snapchat’s advertising page, the ephemeral content app boasts some pretty impressive figures.

Digitally Approved. Each year I like to dive into a specific platform that can make an impact for brands in the coming year. In February of 2014, I published “2014: The Year of Tumblr.” This prediction was recently validated, as TechCrunch released data showing that Tumblr just overtook Instagram as the fastest-growing social platform. In 2015, Snapchat is the fastest growing social app. I have received numerous client requests for POVs on the platform, and I was recently briefed by the Snapchat team. What the team unveiled takes the platform to the next level for brands interested in reaching the 14-to-28-year-old demo in 2015. Snapchat is already the fastest growing social app heading into 2015. Here are the five reasons to consider Snapchat in 2015: Snapchat For Marketing?!?! So if you’re reading this, I can probably guarantee that you’ve used Facebook, Twitter and let’s say LinkedIn.