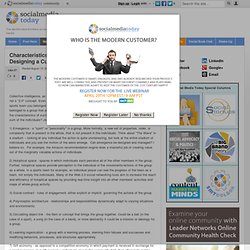 Even jaded skeptics will admit that most of us have experienced it: remember that sports team you belonged to that had a special feel to it, or a band you played in, or perhaps you belonged to a group that always seemed to create energy just because you met together? What are the characteristics of such groups or activities such that the outcome of the group is more than the sum of the individuals?

Jean-Francois Noubel offers the following characteristics: 1) Emergence - a "spirit" or "personality" in a group. More formally, a new set of properties, order, or complexity that is present in the whole, that is not present in the individuals. 2) Holoptical space - spaces in which individuals each perceive all of the other members in the group. Papers from Collective Intelligence 2012 Conference Now Online. Full text of papers presented at last week’s Collective Intelligence 2012 conference at MIT are now online and available for downloading. 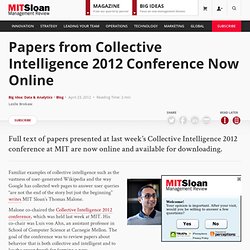 Dhiraj Murthy, an assistant professor of sociology and founder/director of the Social Network Innovation Lab at Bowdoin College, was among the presenters at last week’s Collective Intelligence 2012 conference. Image courtesy of Bowdoin College’s Social Network Innovation Lab. Familiar examples of collective intelligence such as the vastness of user-generated Wikipedia and the way Google has collected web pages to answer user queries “are not the end of the story but just the beginning” writes MIT Sloan’s Thomas Malone. Malone co-chaired the Collective Intelligence 2012 conference, which was held last week at MIT. His co-chair was Luis von Ahn, an assistant professor in School of Computer Science at Carnegie Mellon. 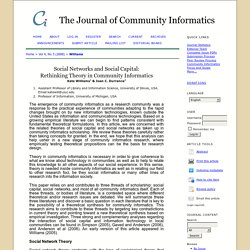 Based on a growing empirical literature we can begin to find patterns consistent with fundamental theoretical formulations. It's not trust. It's social capital. Trust has become the major buzz word in describing the currency of the social media economy. 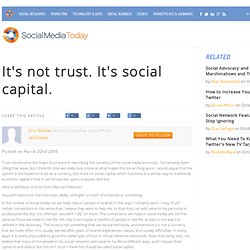 I've certainly been riding that wave, but I think it's time we really took a look at what makes this social thing work. I would argue that the system is not based on trust as a currency, but more on social capital, which functions in a similar way to traditional economic capital in that it can be earned, spent, invested, and lost. Collective Intelligence. Within recent years a network society has surfaced, we are now apart of a new informational technology mode of development. 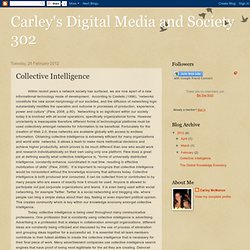 According to Castells (1996), “networks constitute the new social morphology of our societies, and the diffusion of networking logic substantially modifies the operation and outcome in processes of production, experience, power and culture” (Flew, 2008, p.80). Networking is so significant within our society today it is involved with all social operations, specifically organizational forms. However uncertainty is inescapable therefore different forms of technological platforms must be used collectively amongst networks for information to be beneficial. Fortunately for the creation of Web 2.0, these networks are available globally with access to endless information. Obtaining collective intelligence is extremely efficient for many organizations and world wide networks. Collective Intelligence - Strategic Consultancy. 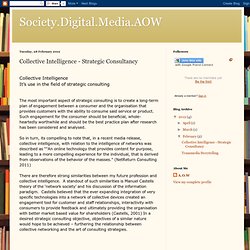 Such engagement for the consumer should be beneficial, whole-heartedly worthwhile and should be the best practice plan after research has been considered and analysed. So in turn, its compelling to note that, in a recent media release, collective intelligence, with relation to the intelligence of networks was described as “"An online technology that provides content for purpose, leading to a more compelling experience for the individual, that is derived from observations of the behavior of the masses.

" (NetReturn Consulting 2011) There are therefore strong similarities between my future profession and collective intelligence. References. Defining the impact of social media on social capital. What are your online friendships worth to the community you live in? 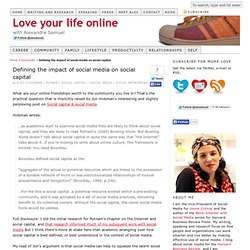 That’s the practical question that is implicitly raised by Jon Hickman’s interesting and slightly perplexing post on Social capital & social media. Hickman writes: …as academics start to examine social media they are likely to think about social capital, and they are likely to read Putnam’s (2000) Bowling Alone. But Bowling Alone doesn’t talk about social capital in quite the same way that “the Internet” talks about it…if you’re looking to write about online culture, this framework is limited. Papers from Collective Intelligence 2012 Conference Now Online. Social Intelligence. Social media have made information so ubiquitous as to be almost devoid of monetary value. 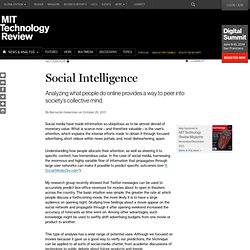 What is scarce now—and therefore valuable—is the user’s attention, which explains the intense efforts made to obtain it through focused advertising, short videos within news portals, and, most disheartening, spam. Understanding how people allocate their attention, as well as steering it to specific content, has tremendous value. In the case of social media, harnessing the enormous and highly variable flow of information that propagates through large user networks can make it possible to predict specific outcomes (see “A Social Media Decoder”). My research group recently showed that Twitter messages can be used to accurately predict box-office revenues for movies about to open in theaters across the country. The basic intuition was simple: the greater the rate at which people discuss a forthcoming movie, the more likely it is to have a large audience on opening night.