Build a Responsive Classroom With Social Media. Students are interacting with social media on an almost-daily basis. 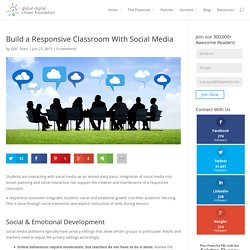 Integration of social media into lesson planning and social interaction can support the creation and maintenance of a responsive classroom. A responsive classroom integrates students’ social and emotional growth into their academic learning. This is done through social interaction and explicit instruction of skills during lessons. Social & Emotional Development Social media platforms typically have privacy settings that allow certain groups to participate. Online behaviours require moderation, but teachers do not have to do it alone. Social Media Tools in a Responsive Classroom Pinterest can help students upload or choose images and create a virtual “poster” of related interests. Practical Examples of a Responsive Classroom Morning meetings The group activity can involve the use of Pinterest.

Platforms to communicate directly with parents Rules and outcomes are shaped with group collaboration. 4 critical mistakes that inventors make. Like most history, the narratives of innovation tend to be written by — and about — the victors. 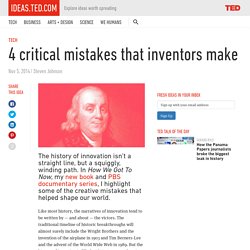 The traditional timeline of historic breakthroughs will almost surely include the Wright Brothers and the invention of the airplane in 1903 and Tim Berners-Lee and the advent of the World Wide Web in 1989. But the history of invention is filled with just as many heroic mistakes and creative failures. Here are a few of my favorite missteps and lessons: Invention: The Phonautograph. Inventor’s mistake: A glaring blind spot in their field of vision. An 1859 model of Édouard-Léon Scott de Martinville’s phonautograph. Science & Math Related Inventions. Current Category: Science & Math. 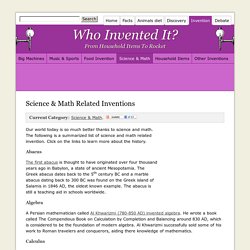 Our world today is so much better thanks to science and math. The following is a summarized list of science and math related invention. Click on the links to learn more about the history. Abacus The first abacus is thought to have originated over four thousand years ago in Babylon, a state of ancient Mesopotamia. Algebra A Persian mathematician called Al Khwarizmi (780-850 AD) invented algebra. Calculus. Invention Category. Idea Showcase - The Great Idea Finder. Autodesk Sustainability Workshop: Whole Systems Design. EcoDesign 6 minute crash course design for sustainability strategies by Leyla Acaroglu. The History of Invention and Technology Timelines. GE Global Research. Top 10 'inventions' that changed the world. In 1979 Sony spawned the era of wearable technology with its iconic personal stereo. 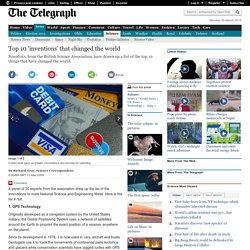 It enabled music fans to listen to their music while on the move without inflicting their choices on those around them. It provided the soundtrack to millions of morning commutes. The Walkman quickly changed listening habits and became hugely popular as jogging culture took the 1980s by storm – here was something that allowed you to listen to your music while you worked out. This wearable technology has now evolved, thanks to Apple, into the iPod and has changed music for ever. 3. These boring sets of black and white lines can now be found on almost every single item bought from a shop. Norman Woodland first developed an early form of the bar code in 1949 by combining ideas from movie soundtracks and Morse code to help him speed up store checkouts. 4.

Traditional family dinners around the table disappeared and pre-packaged "ready meals" eaten on the sofa became the norm. Projects Archive - Make: Zambian tablet ZEduPad transforms classrooms into interactive hubs. Whether it's learning how to read and write or setting up your own farm, a Zambian computer tablet -- known as the ZEduPad -- is trying to open up the country's information highway. 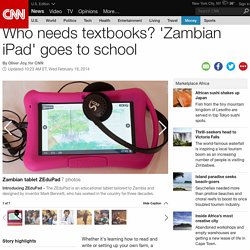 The brain child of British tech entrepreneur Mark Bennett, the ZEduPad principally teaches users basic numeracy and literacy skills, aimed at primary school children. "It became clear that there was a huge need for this kind of technology," Bennett said, "particularly tablet technology, which has come a long way in Africa in recent years. " After arriving in Zambia 30 years ago under the British Aid Program, Bennett worked in the computer department at the country's national university for over a decade before deciding to go it alone. "We can really do something very major for the first time," he said. "We've invested about $5 million to date... Interactive learning Bennett said the ZEduPad is set up to teach grades one to seven through interactive learning in every subject from math to PE, art and music.

How Does Technology Change Lives? Do you know someone who has a physical or mental disability? 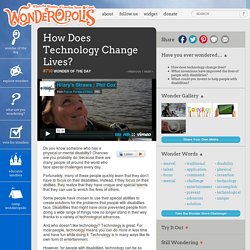 Chances are you probably do, because there are many people all around the world who face special challenges every day. Fortunately, many of these people quickly learn that they don’t have to focus on their disabilities. Instead, if they focus on their abilities, they realize that they have unique and special talents that they can use to enrich the lives of others. Some people have chosen to use their special abilities to create solutions for the problems that people with disabilities face. Disabilities that might have once prevented people from doing a wide range of things now no longer stand in their way thanks to a variety of technological advances. And who doesn’t like technology? However, for people with disabilities, technology can be so much more than just entertainment.

For example, recent advances in technology have given us a wide variety of laptop and tablet computers.