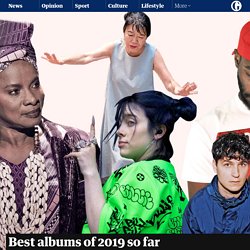 What we said: “Full of subtle charm, it’s an album of deceptive depths in which to immerse yourself.” Read the full review Cass McCombs – Tip of the Sphere The Californian troubadour, who has steadily wound his way through the fringes of Americana and indie for over 15 years, delivers another romantic, faintly psychedelic masterpiece. What we said: “McCombs rewards deep listening. The Comet Is Coming – Trust in the Life Force of the Deep Mystery With as much an affinity with hip-hop and progressive rock as jazz, the trio of reeds player Shabaka Hutchings, synth player Dan Leavers and drummer Max Hallett make one of the most cosmic statements of the current British jazz revival. 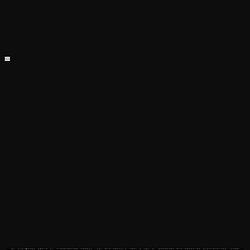 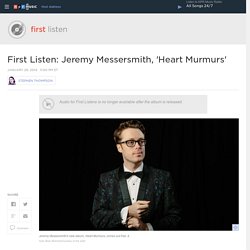 Kyle Dean Reinford/Courtesy of the artist hide caption itoggle caption Kyle Dean Reinford/Courtesy of the artist Jeremy Messersmith's new album, Heart Murmurs, comes out Feb. 4. Kyle Dean Reinford/Courtesy of the artist Minneapolis singer-songwriter Jeremy Messersmith sings sweet, timeless songs about love, desire, death and grief — not, it would seem, the stuff of grandiose artistic ambition. As its title suggests, Heart Murmurs mostly traverses the terrain of love, but Messersmith scrutinizes it from as many angles as possible: The album traffics in thwarted desire ("It's Only Dancing"), stubborn devotion ("Tourniquet") and bad-boy self-flagellation ("Bridges") before 15 minutes have passed. But for the singer himself, that's where the modest expectations end: With its subtle strings and sly infectiousness, Heart Murmurs is no less than an attempt to craft a new batch of pop standards.

Diego Garcia: NPR Music Tiny Desk Concert. List of Hipster Musicians & Groups. Since the mid-2000s, the word hipster has invaded the lexicon of pop culture and has become a term, for better or worse, synonymous with things either A) cool B) ironic C) ironically cool. 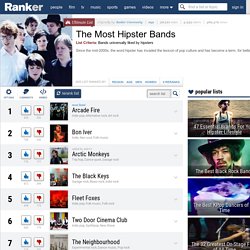 Hipsters enjoy their own culture that is decidedly not mainstream. There are hipster brands, hipster movies, hipster jobs, hipster restaurants and, of course, hipster bands. People generally get the terms indie and hipster confused, but for the sake of this list, we're going to call bands who are primarily indie, hipster. This list includes bands that are signed to major labels as well, but the criteria is that they're beloved, enjoyed, and respected by hipsters as well. You'll see hipster music favorites like Vampire Weekend, Phoenix, and Grammy winning bands Arcade Fire and Bon Iver.