GO Global. Security Check Required. Why America’s Higher Education Needs Reform — The Synapse. Genius Is More Common Than You Think — 7 Days of Genius. Are you having a big, breakthrough idea right now? 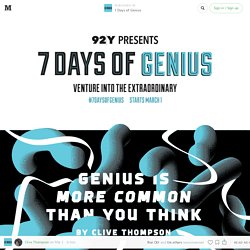 A stroke of genius? A rare, Eurekan burst of insight? Congratulations! Except for one thing: This is what’s known as the principle of “multiples,” which posits that genius breakthroughs in innovation, science, and the arts aren’t rare at all. The modern story of multiples begins back in 1922, when two sociologists — William Ogburn and Dorothy Thomas — published a paper on the concept. For example, they found that four different astronomers in 1611 independently discovered the existence of sunspots. The co-occurrence of genius was so common it led them to pose a question that was equal parts profound and mischievous: “Are inventions inevitable?” The concept of multiples seemed radical and weird. It’s because, as Ogburn and Thomas noted, they don’t come merely from the brains of brilliant people. So again, let’s say you’ve got a bold new idea. 9 Things I Would Tell My 17 Year-Old Self. 9 Things I Would Tell My 17 Year-Old Self You’ve probably seen one or two blog articles in the ether with a similar title. 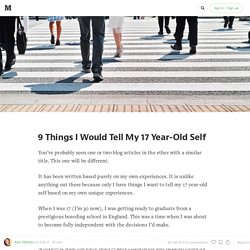 This one will be different. It has been written based purely on my own experiences. It is unlike anything out there because only I have things I want to tell my 17 year-old self based on my own unique experiences. When I was 17 (I’m 30 now), I was getting ready to graduate from a prestigious boarding school in England. I was not self confident at that age. At school, I felt like an outsider. Having ‘graduated’ from school, as well as a colourful and varied twenties, I’ve collected enough insight and life experiences for myself that I know will be very useful for others who read this. What Would You Do Before You Die? — TED Fellows. When artist Candy Chang invited people to confess their most private wishes in public spaces, the whole world responded. 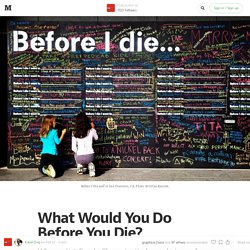 What about you? Above, watch Chang’s talk, “Before I die I want to…” to hear the moving story of how the project came to be. In 2011, while grieving the death of a dear friend, artist Candy Chang installed “Before I Die” — a public artwork that invited anyone walking by to scrawl their life’s dearest wish on the side of an abandoned New Orleans building. To her shock, the idea took off, and “Before I Die” became a global phenomenon. Since its inception in 2011, people have taken it upon themselves to create “Before I Die” walls in 73 countries around the world, in 36 languages — including Afrikaans, Farsi, Papiamentu, and Kazakh. The ephemerality of these public confessionals — made with painted stencils and chalk—is part of their poignancy. “People’s hopes and dreams made me laugh out loud, tear up, and they consoled me during my own tough times,” says Chang.

Every day is all days. The Greatest Lesson I Never Learned — Bad Words. I had many teachers, great and wise. 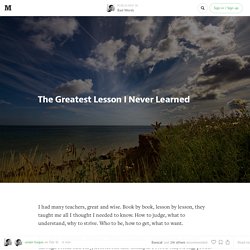 Book by book, lesson by lesson, they taught me all I thought I needed to know. How to judge, what to understand, why to strive. Who to be, how to get, what to want. I studied diligently, and grew. The lessons of my teachers saw me safely through storm and fury, heartbreak and triumph. And yet. The boy had become the man. Somehow, my teachers had failed to teach me the greatest lesson of all. How to learn a new language: 7 secrets from TED Translators. “How Can I Write My Essay Easily?” Follow 10 Simple Steps! Словотвір. Dictionary, Encyclopedia and Thesaurus - The Free Dictionary.

KyivPost / Independence. Community. Trust. The New Yorker. LIFE. A Simple Thing You Can Do Today that Will Make You Happier. Email You know you are on the right track in life when you become disinterested in looking back, and eager to take the next step. 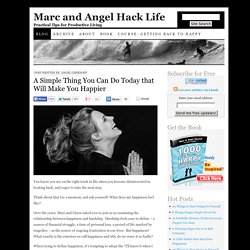 Think about that for a moment, and ask yourself: What does my happiness feel like? Over the years, Marc and I have asked you to join us in examining the relationship between happiness and hardship. Hardship feels easy to define – a season of financial struggle, a time of personal loss, a period of life marked by tragedies – as the source of ongoing frustration in our lives. But happiness? When trying to define happiness, it’s tempting to adopt the “I’ll know it when I see it” mindset.

These are what I have written down. But here’s the real secret to happiness: what makes me happy may not make you happy. In some of our recent blog posts, Marc and I have pushed you to define the obstacles in your life – the struggles standing between you and happiness. When we know how to get to happiness, we can be sure that we make it a regular part of our day. Your turn… BuzzFeed. Archive.