Hoklo people. In a narrow scope, "Hoklo people" refers mainly to people who speak and use the Hokkien dialect of Min Nan Chinese spoken in southern Fujian, Taiwan, Malaysia, Singapore and by many overseas Chinese throughout Southeast Asia. 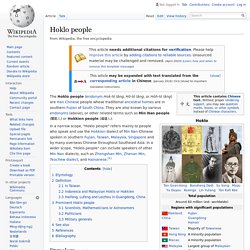 In a wider scope, "Hoklo people" can include speakers of other Min Nan dialects, such as Zhongshan Min, Zhenan Min, Teochew dialect, and Hainanese.[1] Etymology[edit] In Taiwan, there are three common ways to write Hoklo in Chinese characters (Min Nan pronunciations are given in Pe̍h-ōe-jī).although none have been established as etymologically correct: In Hakka, Teochew, and Cantonese, Hoklo may be written as 學老 (lit. "learned aged") and 學佬 (lit. Despite the many ways to write Hoklo in Chinese, many Taiwanese will use the term Hō-ló[2] to refer to the language and Hoklo culture. Definition[edit] In general, the Hoklo people can refer to one of the following: In Taiwan[edit] During the two centuries of Qing rule, a large number of Hoklo men took aboriginal brides.

Island Retreat, Day-tripper's Delight. Hong Kong is greener than you might think. 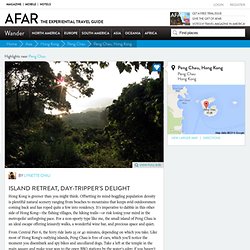 Offsetting its mind-boggling population density is plentiful natural scenery ranging from beaches to mountains that keeps avid outdoorsmen coming back and has roped quite a few into residency. It's imperative to dabble in this other side of Hong Kong—the fishing villages, the hiking trails—or risk losing your mind in the metropolis' unforgiving pace. For a non-sporty type like me, the small island of Peng Chau is an ideal escape offering leisurely walks, a wonderful wine bar, and precious space and quiet. From Central Pier 6, the ferry ride lasts 25 or 40 minutes, depending on which you take. Tanka (ethnic group) 'Water gypsies' fear lifestyle sea change. The Tanka People of Hong Kong. I have a fascination for Hong Kong's Tanka people and I promised ages back to explain why. 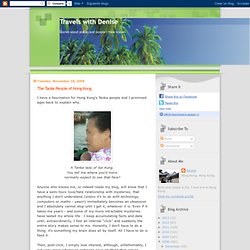 A Tanka lady of Sai Kung.You tell me where you'd morenormally expect to see that face? Anyone who knows me, or indeed reads my blog, will know that I have a semi-toxic love/hate relationship with mysteries; that anything I don't understand (unless it's to do with technology, computers or maths - yawn!) Immediately becomes an obsession and I absolutely cannot stop until I get it, whatever it is.

Even if it takes me years - and some of my more intractable mysteries have lasted my whole life - I keep accumulating facts and data until, extraordinarily, I feel an internal "click" and suddenly the entire story makes sense to me. 04/12. Imagine, this is in spain. what's wrong? 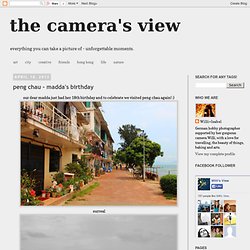 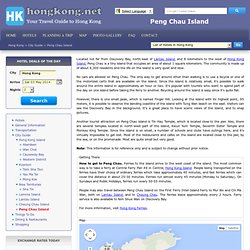 The community is made up of about 6,300 residents and the life on the island is very quiet and slow. No cars are allowed on Peng Chau. The only way to get around other than walking is to use a bicycle or one of the motorized carts that are available on the island. Since the island is relatively small, it's possible to walk around the entire island in approximately an hour or two. It's popular with tourists who want to spend part of the day on one island before taking the ferry to another. Peng Chau, Hong Kong's underdog island. When it comes to island destinations in Hong Kong, Peng Chau rarely finds itself on the tourist agenda, making it the perfect place to get away from all those people trying to get away from it all. 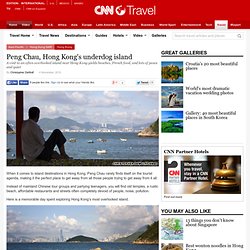 Instead of mainland Chinese tour groups and partying teenagers, you will find old temples, a rustic beach, affordable restaurants and streets often completely devoid of people, noise, pollution. Peng Chau : HK’s intimate island. One of the greatest things about Hong Kong is that it has the outlying islands. 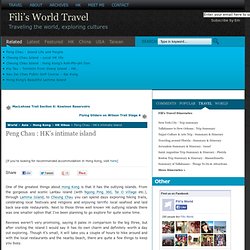 From the gorgeous and scenic Lantau island (with Ngong Ping 360, Tai O Village etc.), through Lamma Island, to Cheung Chau you can spend days exploring hiking trails, celebrating local festivals and religions and enjoying terrific local seafood and laid back sea-side restaurants. Next to those three well known HK outlying islands there was one smaller option that I’ve been planning to go explore for quite some time. Reviews weren’t very promising, saying it pales in comparison to the big three, but after visiting the island I would say it has its own charm and definitely worth a day out exploring. Though it’s small, it will take you a couple of hours to hike around and with the local restaurants and the nearby beach, there are quite a few things to keep you busy. This last photo of Peng Chau was taken from the Finger Hill top : 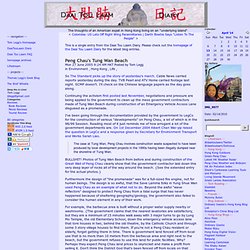 Cable News carried reports yesterday during the day. TVB Pearl and ATV Home carried footage last night. SCMP doesn't. I'll check on the Chinese language papers as the day goes along. Continuing the activism first posted last November, negotiations and pressure are being applied to the government to clean up the mess government contractors made of Tung Wan Beach during construction of an Emergency Vehicle Access Lane disguised as a promenade. I've been going through the documentation provided by the government to LegCo for the construction of various "developments" on Peng Chau, a lot of which is in the 98/99 Session. The case at Tung Wan, Peng Chau involves construction waste suspected to have been produced by local development projects in the 1990s having been illegally dumped near the shoreline of Tung Wan. 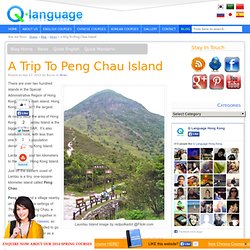 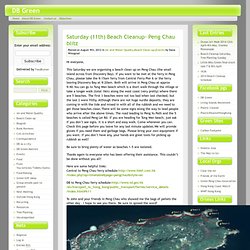 If you want to be met at the ferry in Peng Chau, please take the 9:15am ferry from Central Ferry Pier 6 or the ferry leaving Discovery Bay at 9:20am. Both will arrive in Peng Chau at approx 9:40.You can go to Tung Wan beach which is a short walk through the village or take a longer walk (total 1km) along the west coast (very pretty) where there are 5 beaches. The first 3 beaches were not too bad when last checked, but the last 2 were filthy. Although there are not huge nurdle deposits, they are coming in with the tide and mixed in with all of the rubbish and we need to get those beaches clean.There will be some signs along the way to lead people who arrive after the above times.

Peng Chau Island (坪洲) « THE WAHBIANG BLOG. Our last Hong Kong nature-hike happened 4 months ago – towards the end of spring. Personally, I hate shopping outdoor in summer, let alone hiking up the hills. It is insane to hike under the scorching summer sun. PENG CHAU - Hong Kong Extras. Peng Chau is a tiny island situated 8km west of south Hong Kong Island and a short distance from the southern coastline of Lantau Island. Around 6,300 people live on the island which being only around 1000 metres long is densely populated. It is almost resembles a miniature version of its neighbour Cheung Chau, and although something of a rural retreat today, it has an interesting history and was once a thriving industrial island.

View Larger Map. Index111JunkHarbourPengChau. Peng Chau is another of Hong Kong's many islands, but this island has no typhoon shelter. It has also no proper port.Still there are many junks and sampans here, - after all it is an island -, but since it has no harbour, it is more correct to call it an anchorage. File:HK PengChau WingOnStreet StoneHouse.JPG. Green Peng Chau Association / 坪 洲 綠 衡 者. Lescopains. Peng Chau island – 坪洲. My brother lives in Hong Kong but has never visited any of the nearby islands so we both decided to check them out. There are many islands to visit but once I learned that Peng Chau was only 0.98km it was decided. We took a ferry to Central then to the tiny Peng Chau island. The town itself was extremely small and exotic sounding birds were twittering and tweeting. The place looked like it was straight out of the 1940’s – almost no technology in sight, wild-but-tame-looking dogs roaming around, people riding bicycles everywhere, fisherman covering the rocks, and old couples just sitting around – doing absolutely nothing.

Sitting around and doing nothing seems to be a past time in Hong Kong, I don’t quite understand it. All aboard. Hong Kong & Kowloon Ferry Holdings Limited. Green Peng Chau Association : Ancient History. Welcome to Peng Chau District Councilor - Ma Chun Tim!