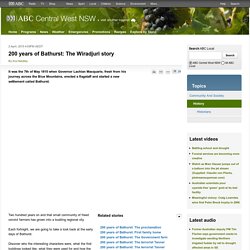 Each fortnight, we are going to take a look back at the early days of Bathurst. Discover who the interesting characters were, what the first buildings looked like, what they were used for and how the community developed. Historian Robin McLachlan will be our guide and in this episode, we are taking a look at how the Wiradjuri people responded to these white settlers arriving in Bathurst. Arrival of Governor Macquarie When Governor Lachlan Macquarie arrived in Bathurst in 1815, Wiradjuri men already had a connection with the Europeans.

For months before his arrival, William Cox's camp had been visited by Indigenous men and boys, but the visits picked up in the week Governor Macquarie was in Bathurst. Through Macquarie and Captain Antill's journals, we get two great insights into the early relationship between the locals and these new arrivals. In his journal, Governor Macquarie wrote, Windradyne - video. Windradyne: Indigenous Australian Warrior and Resistance Leader. Windradyne (c.1800-1829), the Indigenous Australian resistance leader, was a northern Wiradjuri man of the upper Macquarie River region in central-western New South Wales. 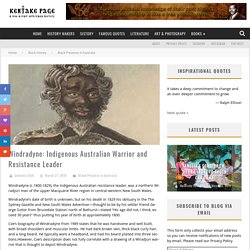 Windradyne’s date of birth is unknown, but on his death in 1829 his obituary in the The Sydney Gazette and New South Wales Advertiser—thought to be by his settler friend George Suttor from ‘Brucedale Station’ north of Bathurst—stated “His age did not, I think, exceed 30 years” thus putting his year of birth at approximately 1800. Coe’s biography of Windradyne from 1989 states that he was handsome and well built, with broad shoulders and muscular limbs. He had dark brown skin, thick black curly hair, and a long beard. He typically wore a headband, and had his beard plaited into three sections.However, Coe’s description does not fully correlate with a drawing of a Wiradjuri warrior that is thought to depict Windradyne.

The Wiradjuri Buudhang (People) are an ancient people. Sources: Windradyne: warrior who saved his people from genocide. SENSING the so-called Black War of 1824 was a lost cause, the noble Wiradyuri warrior Windradyne gathered a handful of his surviving people and walked 300 kilometres across the Blue Mountains and into the heart of enemy territory. 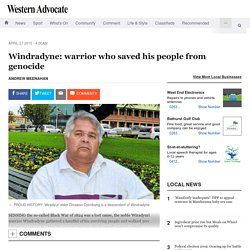 There, wearing a hat emblazoned with the word PEACE, he presented himself to Governor Thomas Brisbane, who was hosting his annual Parramatta feast. Thus, Australia’s shameful sole period of martial law came to an end, possibly preventing the extermination of one of Australia’s largest Koori tribes. But rather than be celebrated as a powerful symbol of goodwill and understanding between the original inhabitants and the invading white settlers, this moment in history has largely been ignored and forgotten. Bathurst, Australia’s oldest inland town, next week celebrates its bicentenary – 200 years since Governor Lachlan Macquarie proclaimed the settlement on May 7, 1815. The date is also significant in Wiradyuri culture, but not as a celebration. ... Windradyne. Windradyne (c.1800-1829), Aboriginal resistance leader, also known as SATURDAY, was a northern Wiradjuri man of the upper Macquarie River region in central-western New South Wales. 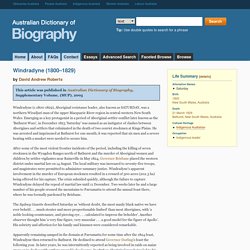 Emerging as a key protagonist in a period of Aboriginal-settler conflict later known as the 'Bathurst Wars', in December 1823 'Saturday' was named as an instigator of clashes between Aborigines and settlers that culminated in the death of two convict stockmen at Kings Plains. He was arrested and imprisoned at Bathurst for one month; it was reported that six men and a severe beating with a musket were needed to secure him. After some of the most violent frontier incidents of the period, including the killing of seven stockmen in the Wyagdon Ranges north of Bathurst and the murder of Aboriginal women and children by settler-vigilantes near Raineville in May 1824, Governor Brisbane placed the western district under martial law on 14 August.

Citation details. Bathurst Heritage Matters. The Wiradjuri People are the people of the three rivers – the Wambool (Macquarie), the Calare (Lachlan) and the Murrumbidgee. 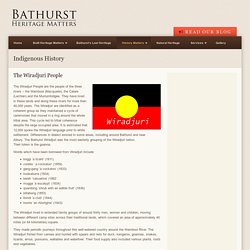 They have lived in these lands and along these rivers for more than 40,000 years. The Wiradjuri are identified as a coherent group as they maintained a cycle of ceremonies that moved in a ring around the whole tribal area. This cycle led to tribal coherence despite the large occupied area. It is estimated that 12,000 spoke the Wiradjuri language prior to white settlement.

Differences in dialect existed in some areas, including around Bathurst and near Albury. Words which have been borrowed from Wiradjuri include: boggi ‘a lizard’ (1911)corella ‘ a cockatoo’ (1859)gang-gang ‘a cockatoo’ (1833)kookaburra (1834)belah ‘casuarina’ (1862mugga ‘a eucalypt’ (1834)quandong ‘shrub with an edible fruit’ (1836)billabong (1853)bondi ‘a club’ (1844)boorie ‘an Aborigine’ (1943) They made periodic journeys throughout this well-watered country around the Wambool River.