Education Resources - MADE. Eureka Stockade. The Eureka Flag based on the constellation of the Southern Cross. 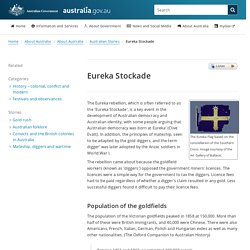 Image courtesy of the Art Gallery of Ballarat. The Eureka rebellion, which is often referred to as the 'Eureka Stockade', is a key event in the development of Australian democracy and Australian identity, with some people arguing that Australian democracy was born at Eureka' (Clive Evatt). In addition, the principles of mateship, seen to be adapted by the gold diggers, and the term digger' was later adopted by the Anzac soldiers in World War I. The rebellion came about because the goldfield workers (known as 'diggers') opposed the government miners' licences. The licences were a simple way for the government to tax the diggers. Population of the goldfields The population of the Victorian goldfields peaked in 1858 at 150,000. Between 1851 and 1860, an estimated 300,000 people came to Australian colonies from England and Wales, with another 100,000 from Scotland and 84,000 from Ireland.

Eureka Stockade: 03/12/2013, Behind the News. Today is a significant day and not just because it's the last BtN of the year. 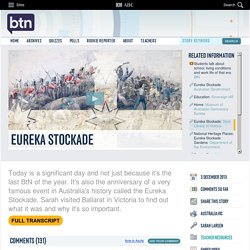 It's also the anniversary of a very famous event in Australia's history called the Eureka Stockade. Sarah visited Ballarat in Victoria to find out what it was and why it's so important. KID: Good morning my name is Amelia Flynn and I am from Ireland. KID: My favourite hobbies here are noughts and crosses, cooking, reading and feeding my horse Maple. KID: I came to the Ballarat goldfields because my father wasn't getting paid enough money and also because of the potato famine. KID: I want to have a useful husband and a big family. It isn't very often that a school excursion takes you back in time. KIDS: It's really serious because everything is exactly the same and we had to have straight backs and hands like this and but it was a lot of fun and it was a great experience. Sovereign Hill is set up to reflect a very important time in Australia's history - the gold rush. Eureka Stockade, Goldfields, Victoria, Australia.

'We swear by the Southern Cross to stand truly by each other and fight to defend our rights and liberties! 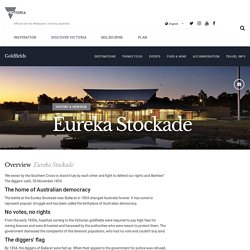 ' The diggers' oath, 30 November 1854. The home of Australian democracy The battle at the Eureka Stockade near Ballarat in 1854 changed Australia forever. It has come to represent popular struggle and has been called the birthplace of Australian democracy. No votes, no rights From the early 1850s, hopefuls coming to the Victorian goldfields were required to pay high fees for mining licences and were ill-treated and harassed by the authorities who were meant to protect them.

ABC online education. 00:00:00:00MICHAEL MACKENZIE:150 years ago, miners on the Victorian goldfields had had enough of authority. 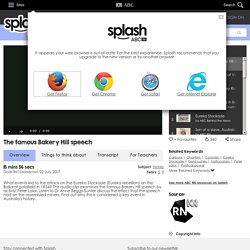 Fed up with licence fees and repressive inspections, judicial corruption, diggers gathered under the Southern Cross flag at Ballarat. It was here that Irish-born Peter Lalor delivered a speech calling for workers to stand up for their rights and liberties or leave. Many stayed and later ran into the bayonets of what became the Eureka Stockade. The speech is commonly known as the Bakery Hill Speech.00:00:31:23WOMAN:Between 1,500 and 2,000 were present and there was no chairman. Treasure Trove: Peter Lalor - ABC Canberra - Australian Broadcasting Corporation. Peter Lalor. Peter Lalor (1827-1889), Eureka stockade leader and politician, was born on 5 February 1827 in the parish of Raheen, Queen's County, Ireland, son of Patrick Lalor (pronounced Lawler) and his wife Ann, née Dillon. 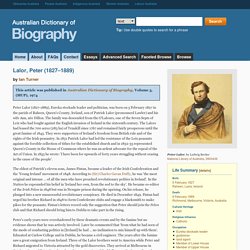 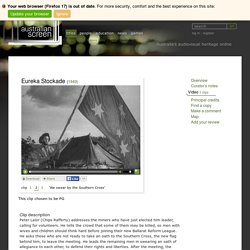 He tells the crowd that some of them may be killed, so men with wives and children should think hard before joining their new Ballarat Reform League. He asks those who are not ready to take an oath to the Southern Cross, the new flag behind him, to leave the meeting. He leads the remaining men in swearing an oath of allegiance to each other, to defend their rights and liberties. After the meeting, the men form up into military formations. Curator’s notes It is clear in the way that Harry Watt mounts this scene that there was some revolutionary fervour, or at least a strong sense of solidarity, in the back of his own mind. This scene also makes clear a major shortcoming of the film.